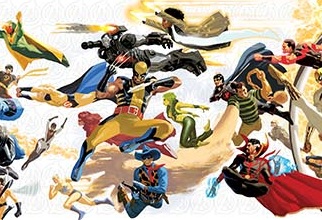 Marvel Comics has announced a six-foot poster will be included with the Avengers #24.NOW Daniel Acuna variant.

Fans can get their hands on this epic piece of Avengers history at comic shops nationwide when All-New Marvel NOW! begins this December! The Avengers 50th Anniversary Poster comes polybagged with special copies of Avengers #24.NOW! Reserve your copy at your local comic shop today!*