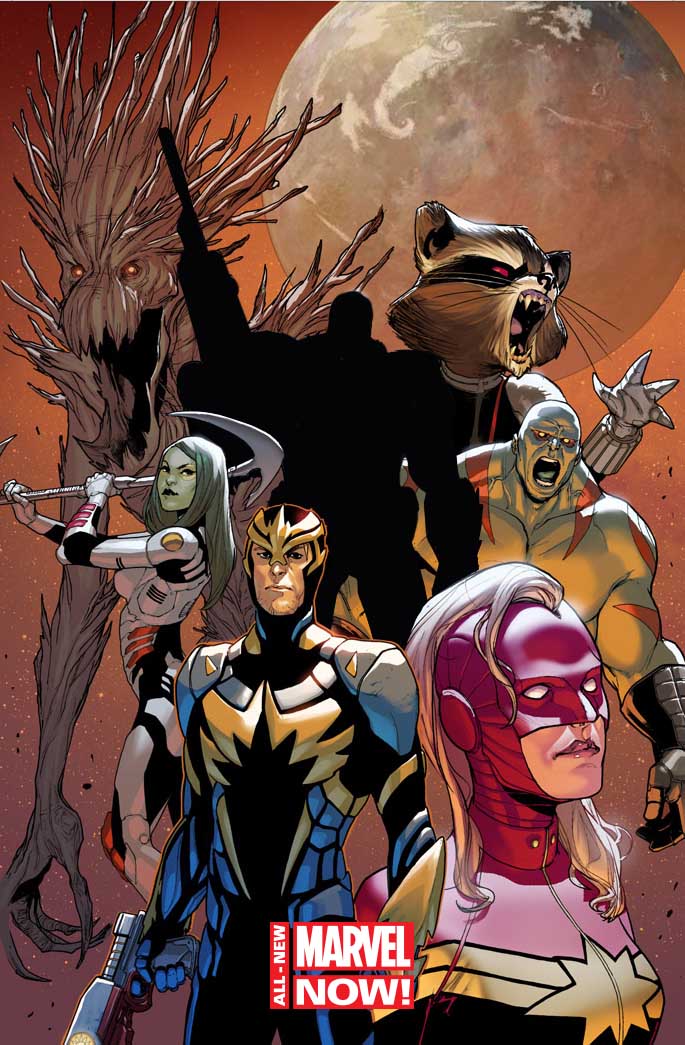 Marvel Comics has announced their Free Comic Book Day offering is Guardians of the Galaxy by Brian Michael Bendis and Nick Bradshaw. 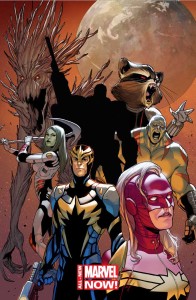 The biggest super heroes in comics today are coming to a comic shop near you for Free Comic Book Day 2014! But first, Marvel is pleased to present your first look at the Guardians of the Galaxy Free Comic Book Day Special! Prepare yourself for two shocking new stories that will shape the Marvel Universe for the next year and beyond! Your first glimpse at the most talked about comics of 2014 begins right here!

First up, get ready for the debut of the All-New Guardians of the Galaxy as next summer’s hottest movie comes to comic shops nationwide! Featuring an all-new story by New York Times Best Selling writer Brian Michael Bendis (AVENGERS, ALL-NEW X-MEN) and the Cosmic debut of blockbuster artist Nick Bradshaw (WOLVERINE & THE X-MEN)!

The Guardians are about to welcome two new members – including Captain Marvel and one Mystery Marvel Superstar you’d never expect to see with the Guardians of the Galaxy! And this mysterious character is about to set off a chain reaction that takes our heroes to the farthest reaches of space – on a collision course with one of the deadliest threats in the cosmos!

“With Nick joining the all-star creative of Brian and Sara Pichelli, Guardians of the Galaxy promises to be THE book that Marvel readers will be talking about all the way through to the opening of their movie in August,” says Senior Editor Stephen Wacker. “And with two new members causing all sorts of problems, the galaxy’s least likely super hero team is going to find itself in a whole mess of trouble.”

But that’s not all! Spider-Man fans are also in luck this Free Comic Book Day, because a special back-up story by the best-selling team of Dan Slott and Giuseppe Camuncoli lays the foundation for 2014’s top secret Spider-Man event…an all-new story that will rock the Wall-Crawler’s world to its core!

Marvel encourages all comic book fans to check out Free Comic Book Day: Guardians of the Galaxy & other great offerings from all over the industry on May 3rd, 2014, as the historic Free Comic Book Day arrives at your local comic shop! For more information about FCBD, visit www.freecomicbookday.com

FREE COMIC BOOK DAY: GUARDIANS OF THE GALAXY
Written by BRIAN MICHAEL BENDIS
Art by NICK BRADSHAW
Cover by SARA PICHELLI
IN STORES THIS MAY!