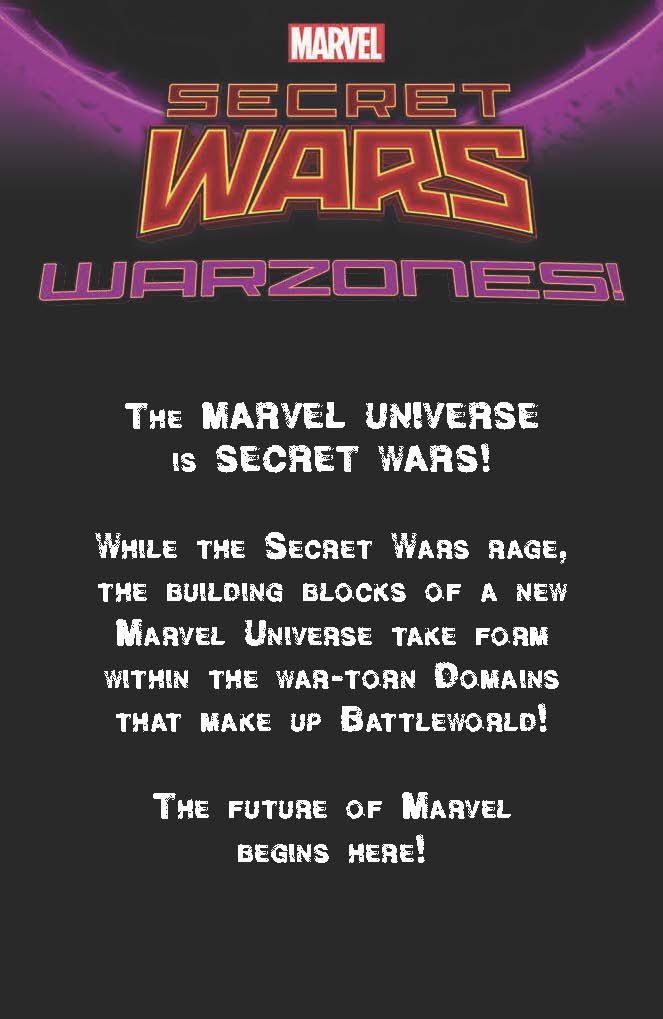 New York, NY—January 23, 2015— The future begins here! When everything ends, there is only Secret Wars. Today, Marvel is proud to announce WARZONES!, the final umbrella of titles launching during Secret Wars! WARZONES! joins LAST DAYS and BATTLEWORLD as the three different categories of titles launching throughout Secret Wars, each with their own unique type of story to tell!

“If you want a glimpse of what the future holds, you’ll find it in the WARZONES titles,” says Marvel Editor-in-Chief Axel Alonso. “Our creators let their imaginations run wild as they lay down the foundations for the future. Whether we’re revisiting the most popular events from Marvel’s past or telling completely new stories, you won’t believe what we’ve got in store for you.”

All that remains in the cosmos is Battleworld, the strange, patchwork realm playing host to countless realities, all existing side-by-side, fused into a single planet! Titles carrying the WARZONES! banner tell stories of the individual dominions of Battleworld. What happens within their borders? What heroes guard their skies? What villains conspire within? How does over 75 years of Marvel’s epic history play out now that Battleworld is all there is?

“To be clear, WARZONES! titles are NOT fill-ins. These are the event caliber books, magnified to the Nth degree,” says Marvel SVP Sales & Marketing David Gabriel. “Secret Wars has afforded us a completely unique opportunity to tell huge, epic, event-sized stories within the framework of this new, patchwork planet – events within events. These titles will lay the building blocks and groundwork for what’s next, if that gives any indication of how important they are!”

While the Secret Wars rage on, the foundation of a new Marvel Universe take shape within the war-torn domains across Battleworld. The future of Marvel begins in the WARZONES!