This week it’s a melding of new and old for the mother of all comics to bring you some of the most mesmerizing covers for the week of April 16, 2014.

Looks closely and what shape do you see on this cover? You might think very literally about the human with the  werewolf shadow. You might talk about the masthead or the house.

Then you might stretch yourself a little further and talk about the dramatic diagonal created by slant in perspective. There is a division with layers of color from orange to a blue-gray to the white of the snow and the red of the shadow.

Now take a last look and look at the additional diagonal in the opposite direction created by that shadow. It’s almost an “X-marks the spot” style which keeps your eyes circling around and enjoying the danger and creepy nature of this cover over and over again. 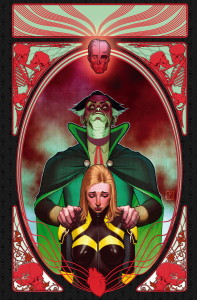 It’s not secret that I’m wild about art nouveau.  While this cover is now full-out in the direction of that style, there are just enough touches to bring about the whimsy of it.

The decorative area set aside for the masthead, the thick black border divisions, skeletons in an unsettling embrace in the corners, the anatomical heart inset of the circular frame and skull perched on top drive home the sorrowful look on Black Canary’s face. Jorge Molina has combined the macabre with the traditionally striking looking hero and villain in a new and unsettling combination. 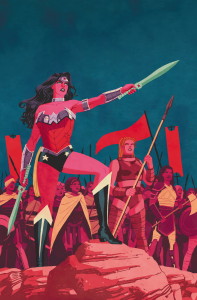 Cliff Chiang continues to define Wonder Woman for this decade in a dynamic pose of power and leadership. Between the return of the previously snaked Amazons and her embracing her role within her family’s pantheon, I cannot help but expect her to break out into a chorus of “Do You Hear The People Sing” at any second. As always it’s a great use of the dynamic blue and red contrast. 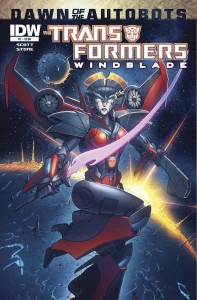 The covers to many of the TRANSFORMERS books have been very well done. However, perhaps it the combination of an all female creative team working on a female based lead character and the dynamic color work that puts this cover over the top.

The glow in the eyes, and hard-edged figure is contrasted against a weapon that has an almost organic curve to the blade. Perched high in space, she fits in perfectly with the women who have been taking over space throughout comics from multiple publishers. 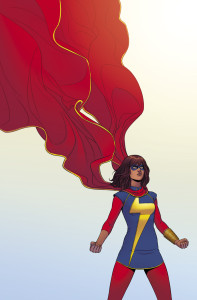 McKelvie’s Ms. Marvel covers continue to embody the heroic spirit. Our shape-shifting lead has yet to fully complete the new uniform she has been gracing these covers with. However, it’s so interesting to think about how her powers and what she is doing on the covers go together.

It’s a combination of beauty, lighting and good ol’ fashion heroic posing that creates an image that grabs your attention while it’s sitting on the comics stand.