Scalera has a double dose of cover beauty for us to behold this week. Whether it’s the animalistic nature taking over the image or the characters playing accent to the masthead with a life of its own,  the art is alive. Gritty and muddled colors still have life with bright patches of green on the cover of Ghosted and with the vivid pink-purple both on the title and the ground of Dead Body Road. These two covers are amazing because they have such different styles yet are created by the same artist and both convey the deep tone of danger facing you as you stare down the eyes of large cats or a motorcycle driver.

The family crest adorns the small corner of a propaganda poster for the family that has taken over the lives of all in their territory. Nothing makes people work harder for their unlimited overlords than inspiring text and gleaming gazes into the dawning sun. Instead of having the poster take center stage and fill-up the entire cover, it’s off-center and given worn edges.  An aged feeling, going along with the family that does not seem to age quickly, adds to the gravity of the image which shows a wide variety of figures and positions that the Carlyle family fills to support themselves.

Ninja’s of The Hand create a cascade of rumbled hair. Splatters of blood shape her head-piece. The violence and beauty that create Elektra are met in a perfect combination on the stark white background of the first issue cover.

The intricate shapes through each of the body parts, swords, smears and sputters are like a painting you witness as it happens, where the painter uses nothing but his hands as the brush. Well, if you look closes at Elektra’s eyebrow… a member of The Hand is definitely utilizing his… hand, and arm and her eye is probably a sword he lost as well. 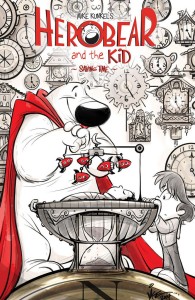 Clocks from around the world and various times litter the background. An hourglass is being used to support the cradle with the little bundle that has been thrown into the mix. If you look even closer, the cradle, the hourglass and foot-piece they are standing on look to be the top of a pocket-watch. Plus, there is that signature red-cape and the ear-to-ear grin.

This isn’t the first time timepieces have shown up in the Herobear story, with a pocket-watch in play originally.  Now, Kunkel’s animation style has taken this to the next level with a time as an important theme to the story… and obviously the cover.