The mother of all comics  is feeling a Flash of inspiration in search of the most unique comic covers for the week of April 30, 2014. 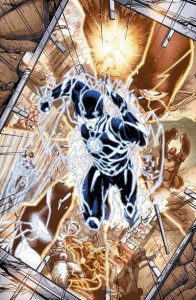 The flip-side of last week’s Flash issue arrives this week from the future. The blue, lightning covered suit is streaking through the Cosmic Treadmill waiting to reveal the secrets of just what happened to Wally West. Alone this cover is little more than a variation on the superhero leaping forward on the page. However, when pared with last week’s cover it creates a collision course between old and new that is dynamic, exciting and (as it seems to be) story changing inside. 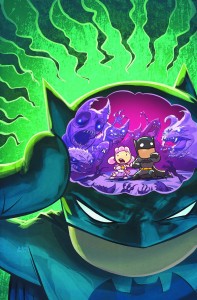 Reminiscent of The Joker’s stint on the Batman covers from the Death of the Family arc from last year,  we are once again crawling into the mind of the world’s greatest detective. The difference this time, is that our little Scribblenauts really are caught in a mindtrap. The bright green background is perfect contrast for a masthead and help Batman stand out. The design of the characters, with their oversized foreheads provides plenty of room for the inset design of action. Purple and green are relatively complimentary colors on the color wheel, so having the purple nightmare really creates that extra pop. 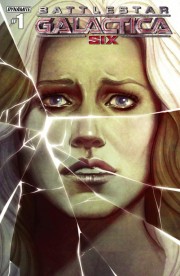 Once again Frison has a heartbreaking face that grabs your attention and not let go.

The centerpoint of the crack is right where the eye naturally falls on the layout of the page, bringing you across and down with the web that spreads outward. The crack across also forces you to look deeply into the tear filled eyes and pierce your soul. Subtle color changes in shading throughout each piece creates a dynamic feeling and adds to the shattered image that is just haunting.

This series has continued to have some dynamic covers each month. This has to be one of the most dramatic with the almost wallpaper like background of gnarled teeth and red eyes about to devour our leading lady of action. The difference here lies in the color style. Previously the characters on the cover have been blended into the background or given an accent color that compliments everything around it. Now, the character is given full clear color, almost as if she’s on the brink of being able to break free from the Umbral that initially caught her in it’s magical web.

Was there ever a cover that was such a perfect metaphor for it’s series?

The wild ride of Deadly Class continues with the bright Vegas sign, the roller-coaster like expressions of the characters in the rear-view mirror and the sideways tilt that brings your eye all the way down the page. Where previous covers used a lot more solids, this month there is a blend of the pastels that creates a tripped out effect along with the skewed point of view. Craig’s art continues to be a strong selling point of this unique and violence story. If you enjoy this cover you’ll love what you find inside.