It’s a sampling from across the major publishers with a double dose of Dark Horse thrown in for good measure for the best covers from the week of April 9, 2014.

The adventure is on with a refreshing take on a city scape for the first cover of this new Image series. Instead of grit and grim, there is a life in abundance for our female Indiana Jones to frame in a picture. The Everyman look of the lead character stands out leaving the unique inhabitants in the background to surprise and delight you. Also, the wings going over the masthead and birder add to the whimsy. 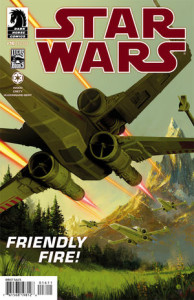 While the Star Wars covers have done a great job of creating photo realistic covers of the lead characters. They have also provided an opportunity for the technology of Lucas’ world to shine. That is especially true with this X-wing in action on the latest cover. It almost feels like the battle has been dropped into Southern Europe. The lighting effects are just icing on the cover, with the X-wing shaded darker below as hit gets closer to the edge of the tree lines and the sun is hanging low. 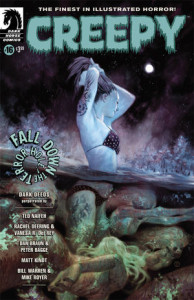 It’s one of those kinds of covers that will add to the many reasons I do not swim in lakes. It’s bad enough to think about fish and bacteria… But now you have creepy, undead schooling around your legs, ready to strike. This cover does a great job of grabbing your eye with the bright nighttime blue and then drawing it into the frightening detail. If one were not even looking closely they might think she’s just surrounded by a lot of underwater growth, with the array of greens and yellows. There is also ample room for the masthead, which keeps the image from feeling like its cut straight in half by the water. 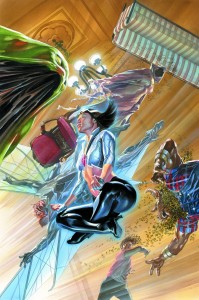 Alex Ross is consistently delivering some of the most beautifully rendered covers in comics. Astro City allows him to take it a step further with leaps in creative layout. The unique style of superheroes, the reflective golden tones and the lines of movement all combine to create dynamic images. 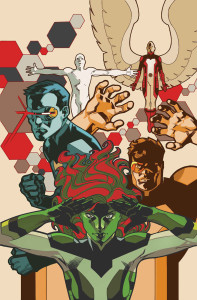 The pop art style is beautiful and dramatic for this month’s over-sized issue. Each character is blocked off in heir own color pallet, reflecting moods, tensions and powers. It’s the type of cover that translates beautifully between poster, t-shirt and other accessories. The color blocking along with the simplified background work together instead of against each other. Beast, Cyclops and Jean also create a great triangle that brings your eye around full circle to take in the full image.;