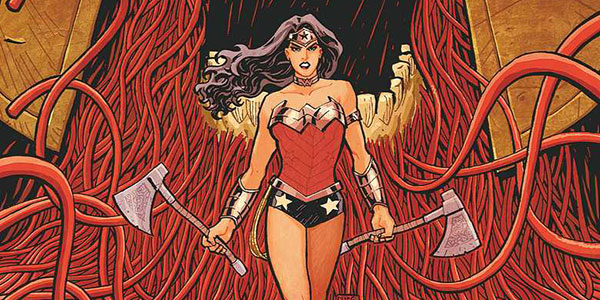 It’s all about the details this week as the mother of all comics, Jessica Boyd, picks the best covers for the week of August 21, 2013 in MOM’S COVER WATCH. 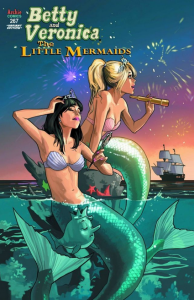 Instead of the harsh warriors or epic sci-fi scenes, Fiona Staples’ style is applied to the whimsical in this variant cover for Betty & Veronica‘s mermaid-themed issue. Her smooth and blending colors pop off the cover and are filled with such interesting detail.

She works to make the faces of each girl unique (something out of the norm for this series) and it can almost make you picture the pair in a real life series. Having Jughead underwater as a fish and everything beneath the waves all a single tone, with occasional highlights helping to create a subtle separation in the image and divide the world above and below the surf. Along with the fading sunset, explorer’s ship and fireworks the combination is enchanting. 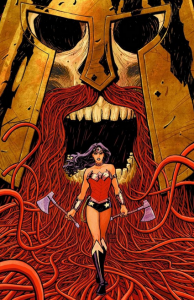 Wonder Woman’s family and past friends continue to collide in her ongoing series. Here Ares’ image is a skeleton homage of death with his beard going out to cover the world. Looks like Wonder Woman is about to give him a much-needed trim with those two hatchets.

The detail with the individual strands of hair and the beaten-up helmet create a stellar background framing the Amazon. The golden tones contrast well with Wonder Woman’s silver tones in her clothing and weapons. 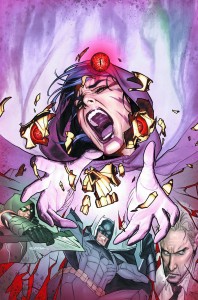 Pandora keeps making things worse in the DC Universe and it looks like this latest issue is no exception.

This month’s cover not only features Green Arrow, Batman and Constantine (one from each of the Justice Leagues) but a great purple tone throughout the piece. There are details buried throughout the broken box, the red eyes and reflective nature of the heroes set below her. With the three blow and her centered above they create a pyramid layout that brings your eye down and across the page to take it all in and wonder what horror awaits leading into September’s big crossover. 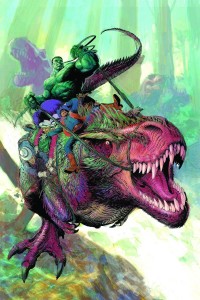 The Hulk, cowboys and dinosaurs create a concoction of amazing details. The level of detail on the Hulk’s new ride is a colorful rainbow and he’s not alone.

There is a slash of negative space that helps the pink and green tones stand out on the page. With the heroes of the book in the upper left corner the eye is drawn across the reigns and the ride. The washed out background creates plenty of space for the masthead so the main image would not be overwhelmed.

This issue does a great job of giving you multiple images to view and see. At first glance you may only see the main character spotlighted in the woods. However on closer view that is not a tree. In fact it’s the other worldly creature that could be a risk once the human is caught with something never seen before.

Spotlight and sunset meet and has this surreal color transition created with purpose and meaning and not just for looks.