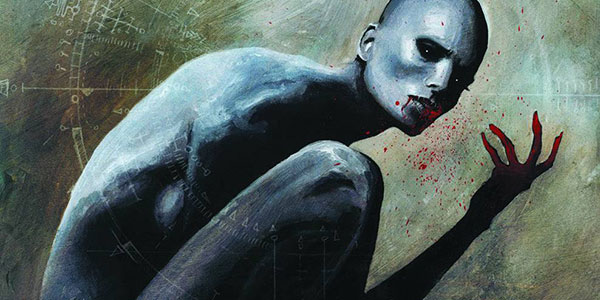 The mother of all comics, Jessica Boyd, gives you the five of the best comic covers for the week of December 19th. Mom’s Cover Watch has a double dose of Marvel, a dash of DC, and plenty of the unexpected. In fact, let’s just start with that.

Menton Matthews III holds a special place on my deviantart watch list for anytime I feel the need to have the living daylights scared out of me. He has some beautiful, yet horrifying looks into his version of Batman on that page. I suggest you have a look.

Tie him to the co-creator of 30 Days of Night and you have a nightmare infused reality of monsters and robots who feed on the blood of humans.

Plus, just look at that cover. I’m not sure, without reading the book, if that is supposed to be one of the monsters or the robots. How deliciously frightening and fun.

I think I’m going to have to read this three issue mini-series just to find out! 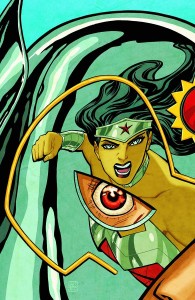 She’s about to punch him in the face.

Needless to say this cover has a multitude of elements that make it work. It seems to colorful, but really works with just a small number. Silver and black create a metallic mix. Red acts as an accent. Yellow on the helmet and tan skin tones add  contrast and it all focuses the eye on the key elements of the eye and Wonder Woman’s hacked off face. 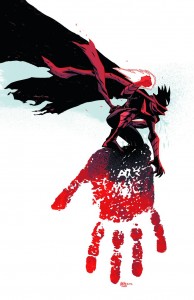 While the previous cover may have used reds as an accent, this cover splashes it all over and throws it in your face.

Up until now, the cover art for this series has had a traditional superhero like feel. Characters splashed across in fight scenes and surreal surroundings.

However, with this cover, author and artist Michael Avon Oeming seems to have embraced the metaphor of his book and has the red hand lifting Faustus from his dark place and put it straight onto the cover. 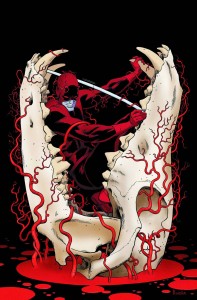 If this cover wasn’t so gorgeous I think I’d laugh at the overt metaphor of the Coyote swallowing Daredevil. Since it’s, “The final showdown with Coyote!”

This is the second time Rivera has made it onto Mom’s Cover Watch. The difference is that before it was all about the subject matter of his cover. Now, it’s despite the subject matter, he has created just a tense and thrilling cover highlighting the Daredevil book’s signature feel.

Between Waid’s writing and Rivera’s covers this run of Daredevil is making a lot of people care for the Hornhead in a way they didn’t know they could. 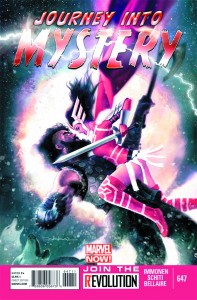 But, look at that cover.

Not too sure about her leg coming up like that. It looks like more like she’s about to wrap her legs around him in a giant hug, or perhaps body slam, than attack him. However, considering her spine is aligned and her body creates a perfect Z visual layout line across the cover, I think I can forgive that.

Add to that the dramatic and Asgardian backdrop along with the frozen tundra of the land at their feet (not to mention the wolves) the cover is breathtaking.

This is one of those covers that makes me sad that Lady Sif’s first arc is only five issues long, and not a guaranteed ongoing series of her own.