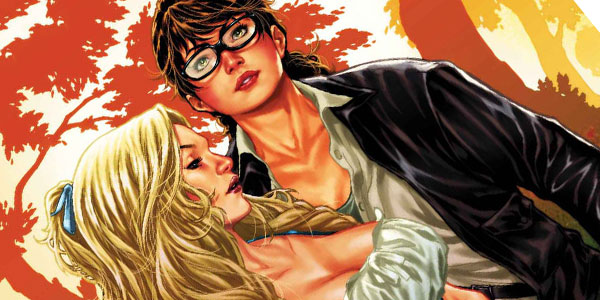 It’s time for the top five covers of comics coming out this week! 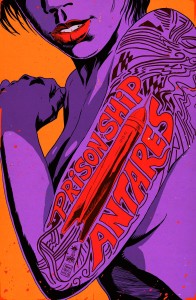 Give you two guesses on who created this cover… but considering you just read the credits you probably need neither! Francavilla’s style and color choice are hard to miss. This Grindhouse cover is no exception.

With just enough tantalization, but not being too provocative, he uses high contrast to sell the arc and the art. “Prison-ship Antares” is the second arc for De Campi’s brutal take on the grindhouse genre that creates strong female characters placed in impossible to choose situations you cannot look away from.  Something as simple as a tattooed beauty would not necessarily represent that. However, with the solid purples against the red of the tattoo title and orange background, there is a stark vibe that comes across. It feeds into the feeling of the book’s mood on the inside, as well. 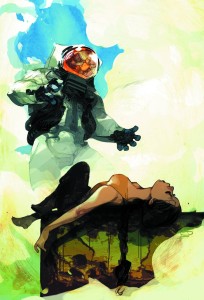 The use of watercolors in fine form.

Tocchini creates the view of a beautiful woman, the space suit looming, and if you look closely, a rather impressive reflected image in the helmet visor. A soft palette of greens and yellows smooth away the background allowing you to focus on the orange on the spacesuit, meaning the reflection as well as the orange of her top.

It’s just a subtle change in color that subtly screams to your subconscious to “LOOK HERE FIRST” grabbing a hold of your attention and not letting go. 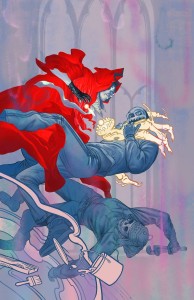 Here is more red to scream for your attention… and purple to create that high contrast.

The melting of the cloak and the figure with the skeletal fight around them creates a vision. If you look closely you’ll notice the arched windows in the background. The paint can and brush are lighter shades along with a pool of paint. The ghostly, magical hand grabbing at the would-be-baddies glows with an almost lack of color and a slight shading of yellow with pink tips… which allows it to meld with the purple background and not be too stark. 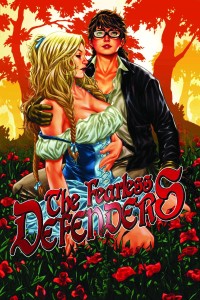 Alright, now it’s time to say good by to an “old” friend.

The Mark Brooks’ covers for Fearless Defenders have paid homage to all sorts of genres and sub-themes. In the concluding issue, Brooks’ gives a tip of the hat to dime-store romance novels everywhere with this classic looking cover.

With Annabelle Riggs and Valkyrie currently sharing a body, and almost a consciousness,  along with Riggs’ new girlfriend, you know the reference here is more homage and metaphor than anything that could be found inside the pages. However, it’s still fun to dream about our two leading ladies and the overtly overly crafted that looks like it could pop up in your grocery store check-out line at any second. 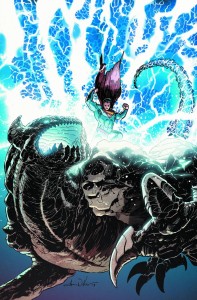 Aaron Kuder has his own take on water… and he does it well.

Aaron Kuder has his own take on lightning, and he does it well.

Aaron Kuder has a great balance of classic Superman looks mixed with classic Superman fights. They come across with lots of energy and action, even with little happening. Notice, despite the red cape, you do not necessarily look at Superman first, but the monster’s open mouth. You then move on to the Man of Steel crashing down upon his back, then whip your eyes around to the tail coming from behind. This constant eye movement is creating a story and the action in your mind, instead of just over-used figure poses leaping toward-out of the page.