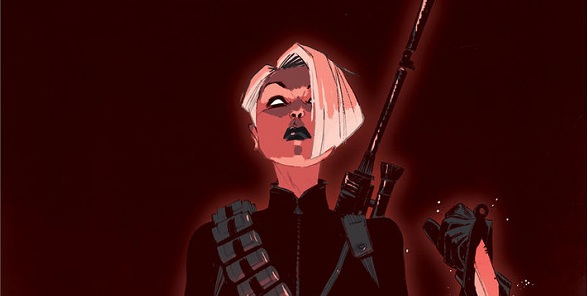 The mother of all comics has been seized by the color printing “primaries.” Find out her choices for the best covers of the week of February 19, 2014. 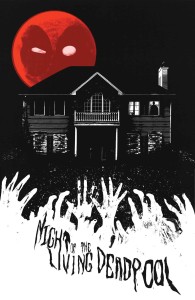 Lots of negative, yet dark space up top, however, the title is melded in perfectly with the white backdrop found below. This series has had the perfect combination of genre appropriate art that almost works into the realm of being a serious zombie book… if it wasn’t for the fact that it’s DEADPOOL… and they even worked in a zombie Michael Jackson into the last issue. You know that this book will poke fun at the theme, and the cover winks, literally, at the Romero movies.

Can Ming Doyle do any wrong? If you attempt to answer that I will officially disown you as a social media friend. With the Cyan, Magenta, Yellow and Black screaming out of the CMYK bracket and grabbing you and saying, “THIS COVER IS BEAUTIFUL.”… even if it is mostly a goat.

Our venture down the CMYK train continues with the latest venture: Undertow. Water has been making a huge splash on covers (I will not apologize for the pun.) This cover emphasizes that with the magenta backdrop and the cyan (O.K. I know it’s darker but deal with me) water below. This is a series that you do not want to miss and the cover just emphasizes that fact.

Do you want to stand up against her? I know I don’t. Scalera has a very over the top style that some can construe as unrealistic. However, when taken with the artistic emphasis intended, this is one bad*** you do not want to contend with, be you alive or dead. The skulls implanted along the pant-line and the red hue and shadow cast along the background do not hurt either.

Is there anything more beautiful than what Jonathan Luna has produced this month? This is the one series where talking heads throughout each panel can be excused because the subject matter is so intoxicating. Even though the majority of the issue is not showing Ada, the subject and focus is solely on her and what she capable of. To have this cover that has her hanging in the balance is both poetic and appropriate for the issue that take the risk factor and amps it up to full scale.