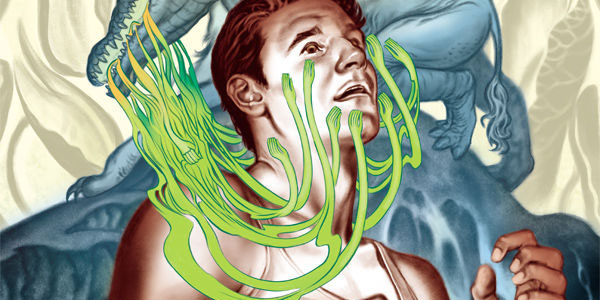 Beauty is in the eye of the beholder, and this holder has her own column to talk about what’s catching her eye. It’s Mom’s Cover Watch for February 27, 2013. 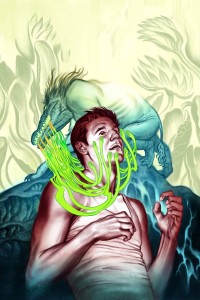 This month’s Angel & Faith provides great contrast, as well as dramatic imagery for the cover.

While the story this month is very emotionally driven, the cover creates a lot of drama, which the Buffy-verse books are known for.

Whether you are happy or annoyed about this slow burn path that could result in Giles returning from the dead, the one thing you can always enjoy are the variant covers. 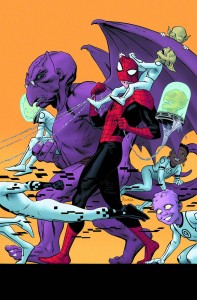 Spider-man dealing with a hardship, yeah, yeah. Been there, done that, have the t-shirt.

I’ll wait for the chuckling to subside.

I was wondering when Spider-man’s relationship with the Future Foundation would rear its head into this unusual storyline playing out in the Marvel Universe. However, I expected it in the pages of FF or Superior Spider-Man before this. It was an amusing surprise to seen the mask askew, the children and play and the fun to play out on Avenging Spider-Man‘s cover.

Once again Rivera coveys the story that is about to play-out with class and fun. 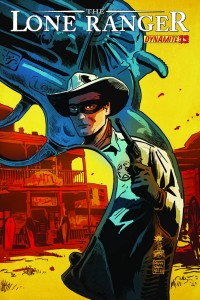 It’s no secret that I’m a die-hard Francavilla-nut.

It’s not just the pulp feel that he brings to any cover that he works on. It’s also the clever layout that is specifically tailored to the story that makes it all the more tasteful and perfect.

This month’s Lone Ranger is a perfect example. Nestled in the handle of a gun the picture is nothing more than a profile picture that could be placed in front of a desert scene, saloon or blistering sun.

Here, Francavilla has the profile laid out in front of all those things, while nestled into the handle of  gun. Brilliant, colorful and mesmerizing. Even if you do not read western comics, you can appreciate the thought that went into this month’s Lone Ranger cover. 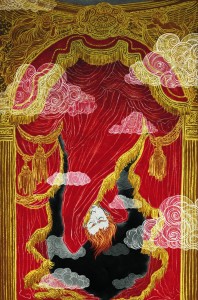 I know nothing about this book – don’t judge me.

I know nothing about this artist – don’t judge me.

Look at it. It’s beautiful. Between the red creased and folded with light white lines, golden trim and the translucent clouds something magical is happening here.

This cover makes me want to crawl under a mound of blankets on a rainy day and just read comics.

Any cover that does that must be doing something right… right? 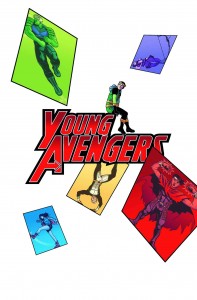 First, we all must recognize the genius that is Jamie McKelvie.

This is, after all, the beautiful mind behind the Captain Marvel uniform.

Now, we have color balance and emotional playful panels that are lighting up the cover of Young Avengers #2. The solicit claiming the title is critically acclaimed before it’s even been released is rather adorable too.

McKelvie technically creates classic superhero looks. However once color is added they always seem to take on an extra dimension that many current art styles lack. This twist on the typical is felt with the stark white background and the playful and moody shades chosen to reflect each member of the team.