It’s Wednesday, and that means a whole new raft of comics are ready for you! Here are a look a the top five covers you’ll find among the January 22, 2014 releases: 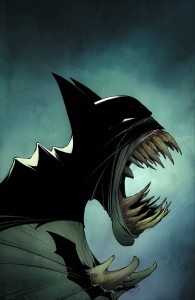 No need to turn up you heater folks… that’s just the cold shiver of terror running down your spine. Every month Greg Capullo has been turning up the creepy factor to the Zero Year issues of Batman. Here they reach their pinnacle.

It is the metaphorical representation of the big bad for this latter section of the Zero Year. I just call it gross, disgusting and perfect.

Once again it is Black Widow looking like she could take you down with a flick of her eyes, especially with a silenced gun in tow.

Once again Marvel knows how to sell me: red, black and hot all over. Doesn’t hurt that the stories within are even more phenominal. 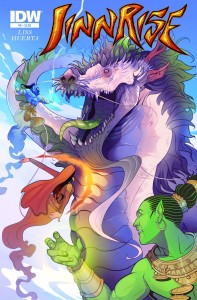 Here is a series that doesn’t exactly make a lot of waves. However each month the covers deliver the most interesting and adventurous takes on jinn.

Bright, almost luminescent, greens stand out against a purple dragon and blue skies. This cavalcade of bright colors grabs your attention with the promise of action within.

These are the covers that David Aja does best. The red outline of Kate Bishop against a real-world outline. In this case it’s the tape record with details such as the writer being the client, Matt Hollingsworth being the engineer, Annie Wu being the artist and Chris Eliopoulos (letterer) being the second engineer. The clever plays and tricks that this series has continued to hold on both the covers and pages will be missed when its final issue comes later this year. 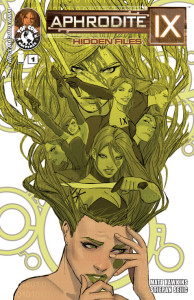 This is digital art at it’s finest. On a consistent basis Stjepan Sejic makes sure that the Aphrodite series is one of the most gorgeously rendered books via computer and always with its signature green hue.

Here that takes over showing us that the focus is not on the action, as it tends to be, but on Aphrodite IX, herself, and what she has witnessed throughout the years and has been forced to forget. It’s a stunning piece to look at as you cannot help to sink deeper into those tinted eyes.