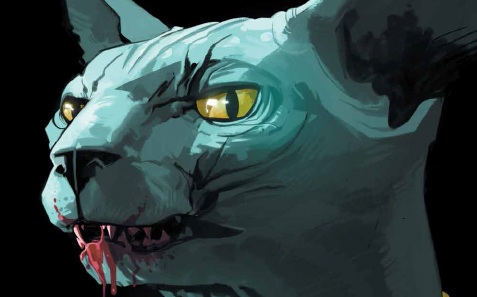 This is the week that Image built, with one ghoulish exception on the horizon. The mother of all comics takes a look at the best covers for the week of January, 29, 2014.

The chilling muted covers of Revival continue, with the classic burst of red. This time one of our leading ladies is draped in a red scarf with a deathly and bloody angel behind her. This gripping series has led readers on an unusual road of twists and turns. The covers do an excellent job of setting the tone for each book.

With the scarf, the shovel and bone hand laid gently on her arm, as if to guide her movements, it looks like more changes may be in store this month.

Has Lying Cat every looked this fierce before?

Blood dripping from Lying Cat’s mouth, glimmering collar, and icy blue skin; Staples once again uses her signature coloring style to create a dynamic image with glowing yellow eyes. The graphic designers do a great job of putting the masthead behind Lying Cat, so as to not compete with the art and create a beautiful yet easy to read focal point. After all, yellow and black are the easiest to read color combinations for text.

Technology, anarchy and beauty come together on this cover.

Like other comics, such as East of West or The Massive, Black Science purposefully combines traditional art used for comics’ covers and graphic design to create a dynamic piece to behold that is also easy to read. Without the band of white along the side the masthead might be lost or cover the art might be covered and art likes this needs to be seen.

Gothic, dark and brooding, Marc Silvestri consistently creates beautiful pieces that can set you on edge.

At this point I’m going to get real: this revealing cover does something I appreciate. Despite the fact that her breasts are massive, their shape is so much more realistic than what most comic art depicts.

Between the gorgeous rendering of her face, and the inventive design of her shoulders and hair, Silvestri shows why he is a master. 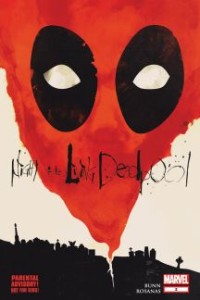 Here we have the exception to Image Comics ruling the week.

In this cover, Shaw creates an unholy and ethereal feeling that is not normally found on the cover of a Deadpool comic. Bunn’s Killology book covers have done a great job of playing with the genre’s the series are lampooning. Here, the ideas are taken more seriously and you see the character of Deadpool if he truly was part of the horror genre. It creates a beautiful image with the classic black and white and red that grabs your attention and doesn’t let go.