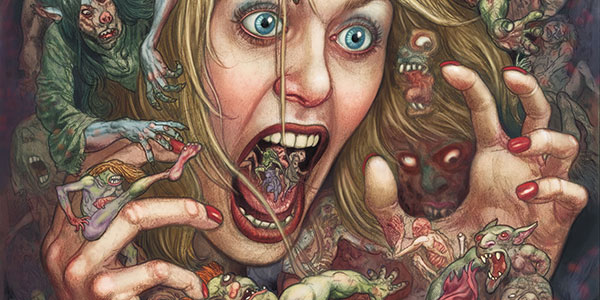 The Mother of All Comics hit a wall this week, because she wanted to pick all the same titles she picked before for the exact same reasons she picked them the first time: Mara, Batman Incorporated, Journey Into Mystery … but if Jessica Boyd did that she wouldn’t be doing her job. That job is to bring you the unique, different and interesting cover art for the week of January 30, 2013 in Mom’s Cover Watch. 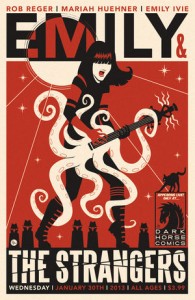 Emily Strange is an entire character built around graphic arts. She started as design used to sell clothing at skate shops and concerts that spread like wildfire and creator Rob Reger has turned into a beloved heroine for girls everywhere. This cover is the first mainstream interpretation of Emily that diverts so far from her original design and yet captures her completely.

If you don’t know, Emily is a goth scientific girl who loves to rock and hang out with her cats. She is a wonderful role model to kids for being yourself. More on that later this week.

For now, enjoy this rock stylized poster used as the variant cover for the new Emily Strange comic. It combines the guitar Emily covets along with her iconic hairstyle and love of cats. 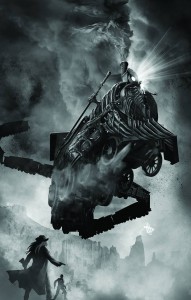 RIPD CITY OF THE DAMNED #3 (of 4)
Written by Peter M. Lenkov and Jeremy Barlow
Art by Dave Wilkins and Michelle Madsen
Published by Dark Horse Comics

IT’S A FLYING TRAIN! I think I’ve just made my case.

Might have to check this out on Dark Horse’s digital comics app to see what this book is about. 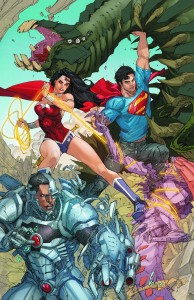 All right, so I broke the rule of not profiling the same book for the same reasons as last month… sort of. True, Rocafort made Cover Watch last month for Superman #15. However, there it was because of the unique perspective between Luthor & Superman.

This month, it’s all beautiful artwork, strong colors and classic Z-layout. You eye is immediately drawn to the red of the page which is the beautiful yet elegant Wonder Woman in action. I could see Hawkeye in this pose and not look absolutely ridiculous.

Next the red melds perfectly into Superman fighting the giant monster. Finally the layout brings you down to Cyborg looking strong, powerful and leader-like… in Superman’s book! Combine that with amazing details that this is a great cover that would look great blown up in a poster. 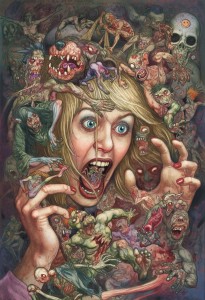 This is disgusting. Don’t believe me? Look in her mouth. Now do you see it?

Lot 13 hasn’t had just a complete heebie-jeebies type of cover, until now. The more you look into the flesh-toned filled page, the more little disgusting creatures you find crawling all over her.

Then, there is the skull with the Watchmen-like smile button to sticker dotting its forehead. With the terror on that woman’s face, I don’t know if anything has the right to be smiling on this cover. Glenn Fabry does an excellent job of keeping your eye constantly hunting for something between every nook and cranny.

Sometimes too much detail can be a covers downfall. This time, it is the cover’s power. 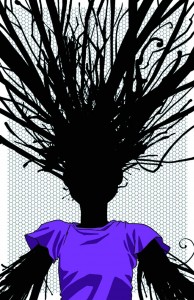 Nowhere Men takes its clean white background covers a step further to the darker side this month (perhaps not only the cover but the story as well). It works having the mesh background and no longer the solid white. The characters were transporting themselves across time and space like no one ever had before, and they were unclear how it would turn out for them.

This cover symbolizes that as well and provides clean contrast with just a dash of the horror-like feel this comic at times delivers within its pages.