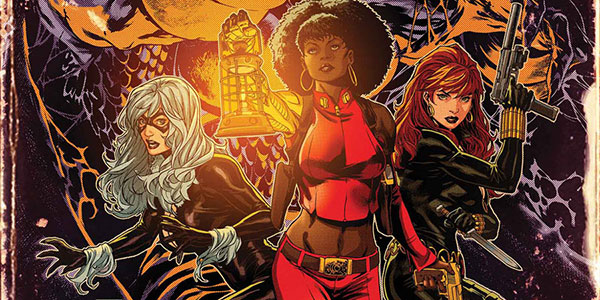 It’s the serious and the fun. The lighthearted and the dark. Contrasts abound as the mother of all comics, Jessica Boyd, takes a look at the best covers for the week of July 10, 2013. 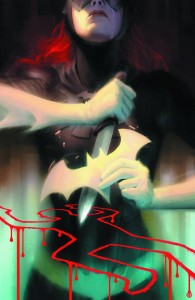 This is not your typical Alex Garner Batgirl… or any female superhero, for that matter. She’s not kicking butt. She’s not in the clutches of a baddie.

Here we see the horrific feelings, the stream of tears and the metaphorical removal of Batgirl from Barbara Gordon’s life.

Her face is in focus on top with the body slowly moving out of focus at the bottom as a background to the representation of what led Barbara to this decision. It’s heartbreaking, soft and emotional all in one picture. Garner is producing the best Batgirl covers since the New 52 began. 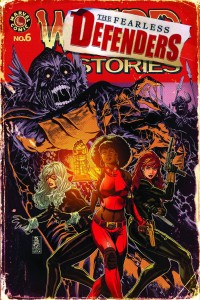 No matter what you think about this series and its outside the box humor, these Mark Brooks covers have been hitting it out of the park every month.

The humorous part is the comic fans out there you who not realize that the covers — while hinting a little at the story within — are homage covers to other culture and media trends. This month, the book takes a pulp horror novel twist with the classic Weird Stories title being covered over by the book’s true name.

The skeletal vikings from the Doommaidens loom largely in the background, reaching out to grasp the more classically covered female superheroes walking in the foreground. Between the faded edges and Misty Knight carrying an oil lantern around, this cover is another spot-on homage that makes you wish the novelization actually existed. 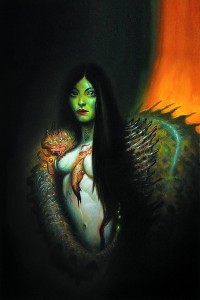 Jim Pavelec creates a cover that just glows and has a life of its own in this rather usual series. It provides plenty of room for the masthead but could hang as a work of art all on its own, with no other explanation needed.  The combination of green, grey and orange also provide a striking contrast of color choices that are not always seen on comics covers and provides a refreshing break for the eyes. 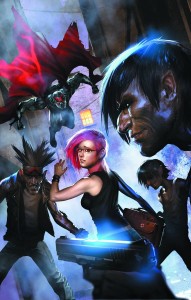 This is a beautifully rendered cover, despite some of the more ominous enemies framing the central figure. Leigh is highlighted well and stands out from the darkness with her bright hair and single spotlight shining down.

X, of course, also stands out from the darkness with a red cloak and signature mask that help the character be spotted without competing too harshly with Leigh — creating a frame of action around her as she attempts to elude her would-be captors. 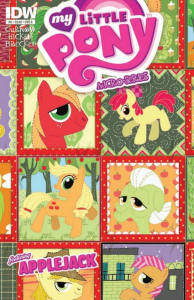 The cover does a great job of capturing the spirit of Applejack.

The quilt block set up shows the country lifestyle she has been raised in on her apple orchard/farm. Each block is filled with her family members that have helped to shape her life. Plus, there are apples EVERYWHERE! In the backgrounds in the patterns, they’re just all over.

Many of the covers for this series have done a good job of incorporating what each of the six ponies from My Little Pony are all about. However, this cover seems to be the most on target of them all.