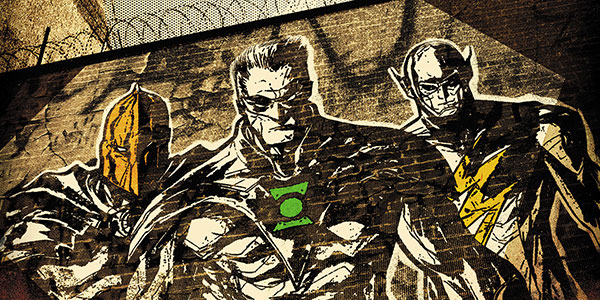 The Big Two have decided that it’s time to paint the town red, in comic book covers, at least. The mother of all comics, Jessica Boyd, takes a look at the best covers for the week of July 3, 2013 in this week’s MOM’S COVER WATCH. 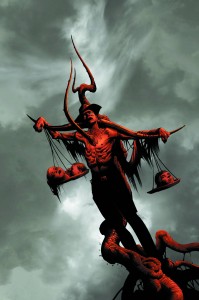 Jae Lee owns the realm of macabre, unusual and unnerving. His covers align straight down the middle of the book and always draw the eye downward.

This is week is no exception, except now the Phantom Stranger is pierced, almost crucified and been given the task of weighing justice for the world. Fitting, perhaps, since this comic is now titled Trinity of Sin (as of last month’s issue). The final decision to have him fully bathed in red light is a beautiful yet horrifying combination. It allows his figure to stand out against the muted grey sky background. However, it just as easily could have been placed against negative space, strong yellow or other combinations which have been utilized in this book’s cover before. The decision to not leave it a solid color creates more depth and an eerie feel about what lies inside. 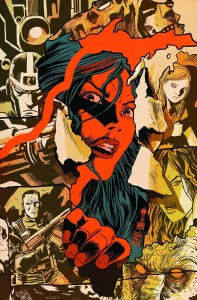 Black and red are Francavilla’s trademark colors. You would think that the public would get tired of it eventually and call for something else. However, I’m not getting anywhere near bored!

This cover takes it to a whole other level, with the Red She-Hulk placed behind the “layers of reality” she is facing. The beige paper, featuring figures throughout her journey, including Machine Man, She-Hulk and Man Thing blend together almost as people in your ordinary life would.

Then, ripping through this potentially apocalyptic brew (after all that is what Betty Ross is trying to do, stop a super soldier-made apocalypse) you have Betty, in her hulking form, making a discovery that does not look all too pleasant. Seems like a fitting cover for a series that’s at an end. 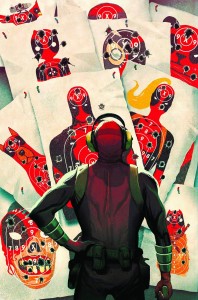 As one door closes, another one opens… even if it’s death, carnage and mayhem! Would you want it any other way for Deadpool Kills Deadpool?

It’s the first book of the new mini-series that the writer himself has been raving (or is it ranting) about. If the title does not make it clear whom Deadpool’s target is, then Michael Del’s cover does: Deadpool. Many incarnations, from human to zombie, canine to his gendered opposite are all in Deadpool’s sights… (is that a cat in the corner?)

This spotted sea of red can’t help but make you giggle. I don’t even like Deadpool, as a character, and yet the Killogy series make me grin from ear to ear. Especially now that he’s after The Merc with a Mouth. 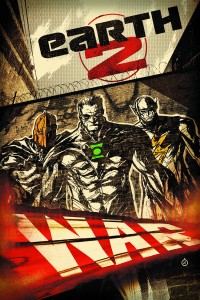 Generally anything that looks like it could be some throwback propaganda poster has me all in (the Uber books offer a propaganda variant with every issue)! If I actually read the series on a regular basis then I just melt.

Here, Juan Doe has a combination of text, setting and characters that all work together in seamless combination. You know at some point an editor has come in and added the masthead for the title. However, the way that Doe created a specific space for it that makes it part of the design is brilliant. The use of colors (specifically red) in both the masthead and the banner below creates an emotional response. Red is a strong color, usually eliciting anger or tension. When combined with the word, “WAR” the whole package is clear. On top of that, the characters are kept neutral with select color choices. By focusing on their main logos (and especially for The Flash, taking out the red) and blending them into the wall, like graffiti, you get a rebellious nature that the entire Earth 2 series has been feeling for the whole of the New 52. 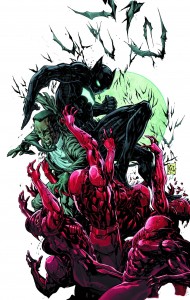 Focal points immediately in the upper left and moving in a back and forth pattern across the page? Check.

This is just a well done cover. Batwing has been gaining speed with every issue. This cover furthers that storyline even more with Lucius Fox front and center, Batwing trying to protect his father, and henchmen that look like they could have crawled out of some sci-fi horror flick.

Plus, the tiny bat details, the highlighting moon and the white background all create a complete picture that makes me want to track down Ken Lashley and give him all my money for the original art.