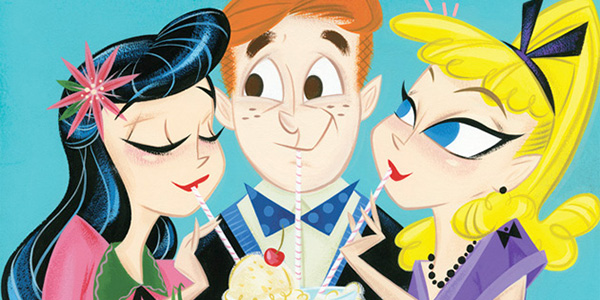 Concepts, spacing and metaphors have the mother of all comics, Jessica Boyd, looking wide-eyed at some of the best covers for the week of July 31, 2013 on MOM’S COVER WATCH. 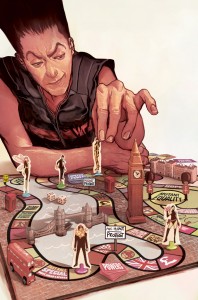 Legion is in control of the game, literally and figuratively on this month’s cover of X-Men Legacy. The board features a few iconic pieces so that those not familiar with the book can instantly recognize the London setting. Key game pieces representing mutants involved also add a whimsical touch to the overall feel.

Most of the books covers, up to now, have mostly been playing off the shape of Legion’s head and hair. While artistic and fun, known that was what was  ahead (pun intended) made it predictable. This breaks that mold and creates a cover you can get lost in reading and discovering every tiny detail. 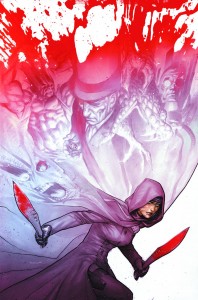 The villains that no one know about are reflecting in blood. Pandora is fighting for the future of the DCU alone. The combination of purple, pink and red flows naturally and gracefully in this cover.  While the eye line does create a natural starting point, the way each of the elements movie into one another (especially Pandora’s cloak) creates a sense of wholeness.

It also works well with the use of negative space. Pandora set against the white background gives a feeling that she’s fighting against the elimination of the DCU heroes and the goodness left in the world. 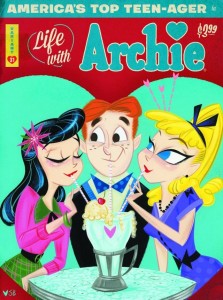 Married life is treating Archie well. At least it is in this variant cover by Stephanie Buscema. The book that takes a look at Archie’s alternate realities with Betty and Veronica is reflected in a combination of old fashion nostalgia and sharp angled characters.

The rockabilly sense makes you almost feel Archie has landed in an episode of Happy Days. It’s a style that can appeal to older collectors because of a sense of longing for the past, and new readers who are drawn in by the colorful combinations and shape combinations. I’m not ashamed to admit, it was my four-year old daughter who talked me into getting this cover. 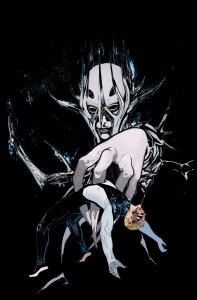 Black, white and horror all over. The DC annuals are stepping up their game on many covers this month. However, Animal Man takes them all with this cover by Travel Foreman.  Foreman’s grotesque attention to detail once again pays off with his interpretation of The Spider Queen.

When combined with the story of Buddy trying to seek help with the son he lost, it creates more heartbreak, with his back-breaking posture. Buddy is arched in her clutches giving a sense of helplessness before the villain he must seek out for help. While most of DC’s covers are very referential and metaphorical, it makes me wonder just how far Buddy is willing to go this time. 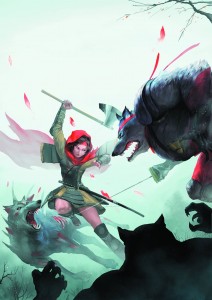 Somehow I do not think the Big Bad Wolf ever had this in mind when trying to gobble up Red Riding Hood.

Akaneiro plays off  the typical story with a bloody fight and a pack that is obviously getting more than what they bargained for on this cover. While Kani holds her own against demonic hordes, she is placed right in the line of immediate sight when looking at the cover. Her position moves naturally into the enemies around her creating a circular movement around the page.

The position in the lower two-thirds and wisp of a tree poking into the corner creates the perfect location for a comic masthead that will not compete in a negative way against such a beautifully rendered piece in neutrals with a splash of red.