The mother of all comics is back! Rested from her comics hiatus (please you know at least 5-10… heck maybe 20 books still got read) Jessica Boyd is ready to look at the best covers for the week of June 11, 2014.

Power streaming from her fists, Carol Danvers’ body language is just scream, “Come at me bitch, if you dare.”

She is quickly becoming the First Lady of the Marvel U, despite the Russian spy with the movies under her belt, and is even featured as the white queen piece in the latest Marvel Collectors Chess Set.  This is so apparent in the latest cover to her ongoing series. The energy streaming from her hands is used to create the flaming and solid background for the masthead. The center star of her uniform glistens like a beacon through the fire. and the red foliage and the bottom helps to make Marvel’s standard All-New Marvel-NOW! logo and red bar down at the bottom more part of the whole package than just an eyesore slapped across the bottom.

I’m considering just giving Kevin Wada a permanent place on the Cover Watch as long as these Shulkie covers keep churning out. Every month there is a new and different perspective from daily to majestic. This month the balancing act of Jennifer Walter’s life is coming to the forefront with a collage of the different face and issues she is having to deal with on a day to day basis. The mysterious contents of the blue file are closer to being revealed and the hunt for those she needs is becoming more clear as well. Take a look at the various characters that are showing up in the photos around the mirror. More than just a few surprises in store. 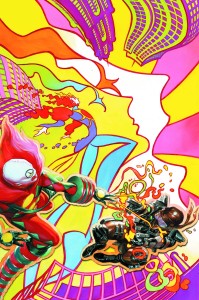 The muted and serious of Kevin Wada is not unheard of by Alex Ross (Kingdom Come.) So this walk on the psychedelic side with the battle raging int he foreground is new and different. While the characters are highly rendered in the traditional Ross style, the multi-layered cityscape could be analyzed by museum goers for hours. The different cutouts of women, one in yellow calm, the other in white screaming… the dash of blue at the bottom could be construed to look like a leg… not too sound too much like Tom Haverford in Parks & Recreation, “There’s just something about these shapes!” 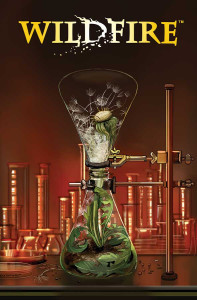 Some of the best designs are the understated ones that just seem to reveal more and more layers as you stare at them.

The cover of Wildfire is one of these images. At first glance it’s just a lab with a beaker and “SCIENCE!” However, look again. The wilting dandelion is more than just growing upward… from the bits and pieces along the outside of the glass, it looks more like it is escaping. With a burnt brown and reddish background, the whites and greens standout. The yellow gradient masthead provides a deep contrast. With what looks like, on the surface, a stale vision there is a feeling of danger and unknown within the pages. 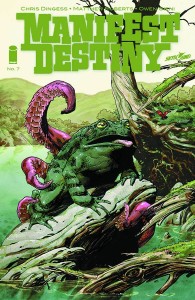 Speaking of danger and unknown within the pages. This historical drama packs a surprising punch every month it hits shelves. Here, instead of the traditional humans, or humanoids, that were are presented with, there is more of a creature lurking from behind feeling. That creeping sensation that something is about to get you is wrapped in brilliant purples and pinks and has it’s claws on a toad. These colors help it stand out among the sea of various greens.

Even when the unknown creatures are out to get something other than humans Roberts still finds a way to make sure you get a fully sinister feeling before you even start the story within.

At this point in the month you’re probably wondering, “I’m surprised the topic of Bombshell covers hasn’t come up yet!” I’ve not hidden my absolute adoration for the variant editions that have been hitting store shelves this week, both from a historical nod representation and just the covers themselves. Never fear, love ’em or hate ’em I’m going to talk all about them in a special edition of Mom’s Cover Watch also out today!