Happy New Comic book day! Today is the day we storm the shops and see what tales await us in our local shop and online. Here are 5 of the best covers you’ll see in stores:

New ride, new body, new look. Tradd Moore is re-imagining not only the new character that will be taking on the vengeful spirit, but the smoking vehicle that tags along with him. With a steep diagonal cutting across the page and an off-center double view of our “leading man” the balance of this page takes you straight into the action before you ever open up to the first page. 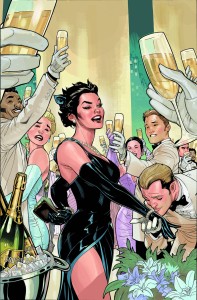 We already know Selina Kyle’s destiny from the pages of Batman #28’s Eternal preview. However, those first steps are stepping out in beautiful color on the cover of Catwoman. Here the Dodson’s have Kyle surrounded in a sea of white while she is decked out in her signature black. It’s a not-so-subtle metaphor that also allows her to leap out on the page. Notice the glasses raised in toast make a concave arc that not only provides room for the masthead but makes sure that no matter where you eye starts it eventually settles on the girl of the hour. 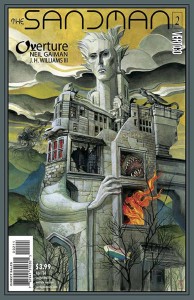 Not getting to see a Williams’ cover on a monthly basis has left a hole in my heart that only this long-awaited cover of Sandman could fill. A house made of dreams, and nightmares, sweeps you away in a combination of Frank Lloyd Wright and Salvador Dali. There is art deco style clouds sweeping in black and white combinations against a mustard sky. With eyes secretly peering out from windows, living monstrous dragon styled gargoyles and an uncharacteristically happy-shaded blimp trapped in a dead tree there must be all sorts of easter-eggs hidden here for die-hard fans. 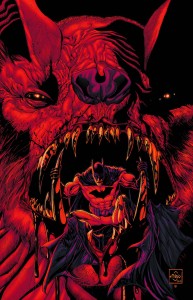 The final cover for BTDK is going out with a blood-chilling edge. Man-Bat is symbolically swallowing Batman who is preparing to fight. There are intricate details in the face. Wrinkles overtake the cover to provide a textured feeling. The red tone over all of Sciver’s finely drawn hairs and skin folds forces the darker blood coming out of his mouth to be shaded in black. There is also a great touch with the glow in the eyes that also seems to create an extra dimension of life.

The Allred touch is back. Let’s face it, never lost it, but now it’s back to being monthly with yet another striking Marvel book. Instead of an ensemble cast set on Earth, we’re given an amazing duo decked in white and silver and his new “companion” being chased by outfit copycat bugs. Black and blue are classic choices for space stories. However, having a striking teal for the lunar surface along with the streak across the cosmos adds to the stylized layout. Instead of being straight across or coming right at you, the Silver Surfer shows an upward motion while the trail of bugs arches from the opposite side creating symmetry.