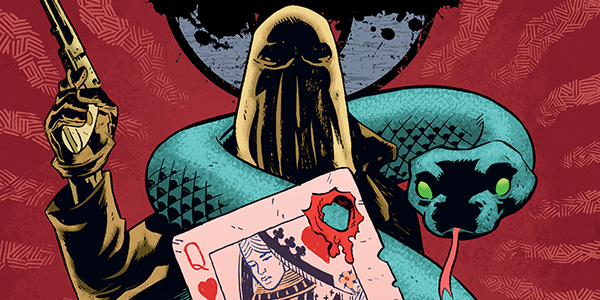 Colors and styles create a rather dramatic tone this week in comic book covers. Jessica Boyd has a rundown of some of the most inspiring covers for the week of March 27, 2013. 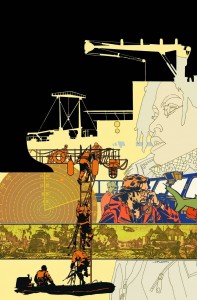 Brian Wood’s dystopian flooded future has many consistencies throughout the book: drama, intrigue, nice pacing. Another thing that is consistent with this book are these beautiful covers. They create a perfect marriage of graphic arts and traditional comic styles.

Dave Stewart is known for clean color work on books such as Umbrella Academy and those types of aesthetics show on the covers as well, even with a black background instead of a white.

On the flip side, John Paul Leon’s characters are interwoven with the different frames and colors creating a real cohesion. Inlaid within the outline of the boat, they continue to add to the lonesome and dramatic feeling Wood’s book continuously conveys, no matter what new clues are revealed. 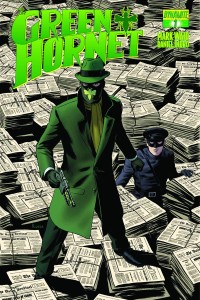 In addition to a long list of Spider-Man covers that Rivera has been tackling lately, he creates an intriguing view with lots of detail in the first issue of Mark Waid’s run on Green Hornet.

Even if not given letters or words, the number of newspapers piled all around that seem to be burying Kato — and that the Green Hornet stands atop of — is amazing to behold. It also provides a great neutral contrast to the all – shall we say shamrock – green suit.

While these are pulp characters you traditionally thinking of seeing in a darker setting, this cover makes the book feel very energetic before you ever open the front cover. 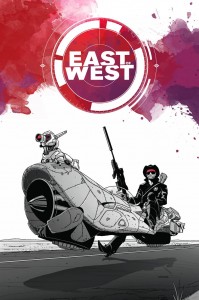 Don’t ask why, because there might not be an answer, but this cover immediately felt like it should be the cover or interior art for The Walking Dead.As many times as Charlie Adlard has been featured on MOM’S COVER WATCH, you know that’s pretty high praise.

However, the lack of wheels immediately sets  you on course for the future that cannot be too pleasant, considering how much heat this rider is carrying. Chances are he’s probably one of the Four Horsemen mentioned in the solicit.

The cover comes across as black and white. However, have you taken a closer look at the reflections? Go on and click on the picture. I’ll wait a second until you zoom and take a look…

That’s right, there’s color in them-there glasses, and other reflective surfaces on the flying bike. It’s a nice touch that sets the mood for western, sci-fi, dystopian, assassins tale. 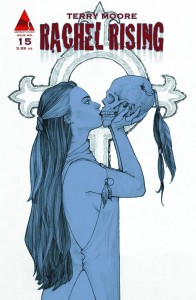 There are very few colors used on this cover, and it is beautiful. Terry Moore has set an ominous tone for this month’s issue of Rachel Rising. With the first woman to walk the Earth making trouble, it’s no wonder.

Blues are usually used to convey feelings of sadness, calm, and peace. However, here they are juxtaposed with the skull. This creates a much more looming feeling or dread; call it a calm before a storm.

Despite the lack of color, there is a great contrast provided with such a stark-white background. It not only causes the figures to stand out, but also adds to the supernatural feeling of the plot. 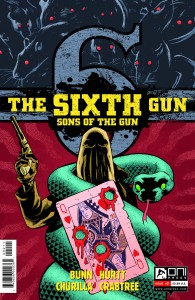 THE SIXTH GUN: SONS OF THE GUN #2
Written by Cullen Bunn and Brian Hurtt
Cover art by Brian Churilla
Published by Oni Press

While our last cover may have been a great example of minimalist coloring to create dramatic effect, this cover is almost 180 degrees in the opposite direction. This is despite the fact that when they’re placed side-by-side, they have a complimentary look.

That’s because Brian Churilla’s cover has lots of tiny details. From the rats on the top that almost look like a wall paper background, to the wavy lines at the bottom, from the snake scale pattern on the reptile to the chipped playing card… details are everywhere on this cover.

However, instead of being realistically or excessively colored in detail, this cover utilizes four main bold choices. By using these darker, bold colors, it not only creates a more ominous feeling, but also is rather delicate which contrasts with the subject matter.