Happy New Comic book day! Shelves are filled with new releases, and the Mom Who Reads Comics has got the 5 best right here….

Instead of being relegated to literature classes that time forgot, Dracula continues to make a tongue-in-cheek profile in the Buffyverse. There are metaphorical layers built into the well rendered image of both Buffy and Dracula popping out of her tomb about the supernatural. These images are combined with the mellow yet glowing color job that takes more from a neutral tonal range.

These covers are not for those who need a literal rendering of human anatomy . Instead loose lines and splashes of paint brush styles are strewn across a black background in what appears to be a single image but provides further exploration of themes introduced in issue one. In one view Elektra is dancing with ribbons swirling around her, until you realize those are knives in her hand. Then, the ribbons become streams of blood. It brings together violence and beauty in one stunning visage.

On the flip side Samnee’s variant is solitary and more reflective of Elektra’s lot in life, both forced upon her and by choice. The mountain is as much a character as she is and fills up the page with uncomfortable beauty and shading. 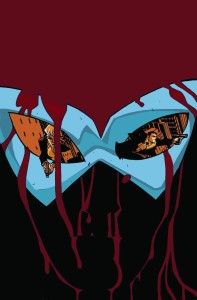 There has been a line of comic books lately who have done an excellent job of chopping a cover in half without destroying the message or keeping your eye from flowing along. We can now add this book to that list. With the characters positioned strategically in the eyes of the mask there is action happening. By not relegating them strictly in the eye sockets but allowing an overlap to occur, there is a bit of flow added, instead of they stopping at the harsh color divisions of the cover.

Another week, another Jenny Frison cover. I can’t control the fact that she keeps turning out wonderfully rendered and dynamic variants.

The red and white combination is used in this geisha portrait. The main character often finds herself wherever her mind can take her or floating through dark memories. No matter what lays on the inside pages, Frison’s cover, with a lost and lonely stare will grab your attention from the comic shelves and have you jumping in.