The subdued, the subliminal, and the sublime take the stage for the best covers for the week of May 28, 2014 in Mom’s Cover Watch.

When René Magritte was 30, he painted a pipe, then wrote below in French, “This is not a pipe” (The Treachery of Images.) For further artistic analysis of that painting, take an art class, or apparently read the YA novel The Fault In Our Stars. In the context of this comic cover, there is a whole new layer… because, she is definitely not a pipe. Mind MGMT is all about agents who operate out in the open and have people see something other than what is really there. So, instead of it being a picture of a pipe, you are being told it is one, while the gun could be pointed straight at your gut and you would never know.

The ominous representation of the unknown landing and rooting evil in our planet comes to life in Jason Howard’s cover. Red and black are a classic combination for giving off sinister feelings. With the roots of these alien trees taking the shape of a skull, you know what lays inside is not sunshine and rainbows. The splatter I. The red background could also double as leaf prints or carnage from blood. Only the story inside can really point to which way things may go. 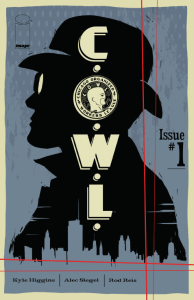 With such a strong hand at shaping Batwoman right now, Trevor McCarthy takes more of a classic graphic design route with this cover. As a representation of a superhero union, there is a great representation of the first half of the 20th century, where labor unions really came to power. The bowler hat and goggles play into this along with the subdued, be it smudged, wallpaper styled background. The Alfred Hitchock styled silloette seems to hint at a bigger conspiracy story that could lay within the pages.

SHELTERED #9
Written by Ed Brisson
Cover art by John Christmas
Published by Image Comics
A fixed point of light in the background of a major player creates beautiful highlights. There are red snowflakes surrounding her as I’d calling on the violence that has befallen and will inevitably seek out our cast again. You eye is drawn right to the “center stage” which battles the eye to look around and forces you to take everything in. It’s a great dramatic feeling. 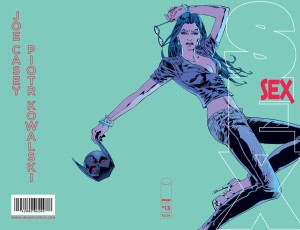 SEX #13
Written by Joe Casey
Cover art By Piotr Kowalski
Published by Image Comics
Falling from left to right your eye easily goes into a simple Z-pattern along the front cover half of the page. The wrap around effect has you take the whole picture in. They say sex sells- but so does simple and sexy.