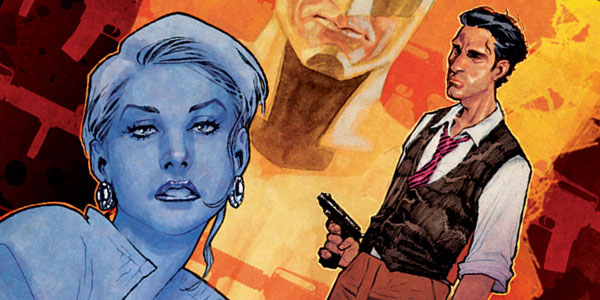 Comic covers have the Mother of All Comics, Jessica Boyd, seeing red this month: literally! These are the covers of the week for May 8, 2013. 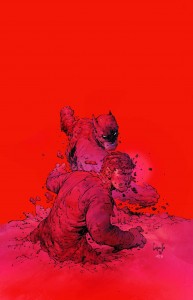 The anger in this cover is written all over it… alright, colored all over it.

Those who know their Batman villains will know instantly whom has been impersonating and ruining the life of Bruce Wayne. The crumbling remains coming off the fist and face, along with the waist-high pit surrounding the real man are very telling.

However it is the color-wash that sets the tone for the two involved. 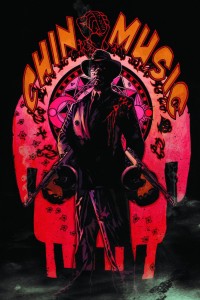 Back-lit in red, Chin cuts an ominous figure. A skull is created with a combination of the window and tommy guns.

Spattering of bullets, symbols and typeface all work in harmony to frame the main figure and create paths for the eye to follow around.

Finally a spattering of red blood on the coat, not necessarily visible at first, completes the image and lets you know how serious things are going to get. 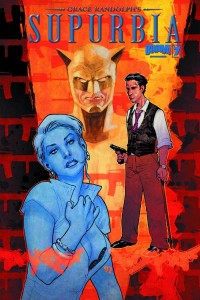 Roux’s cover not only has a red background but a red patterned border laced throughout the image.

The contrast of having Alexis all in blue, the softly detailed and painted Nightfox, along with Alexis’ would-be-love holding a gun creates this feeling.

Pulp covers have been having a field day in the past few months, and it works for this book as well. 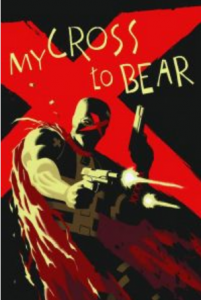 Rivera does a wonderful job with detailed painted characters. He’s often seen using a red and black combination  for Daredevil. However, with X it creates a whole different feeling.

The danger, and mayhem following this character is very evident. Also, the firing bullets and flowing cape create movement and action, before the book even begins! 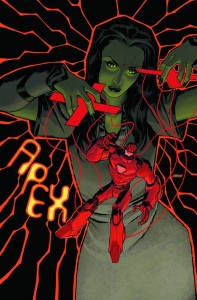 As if things were not already serious for the teens caught in Arcade’s game, they’re set to get more serious this issue with Apex.

Just whom is in charge, pulling the strings and controlling them, is conveyed through this red fractured cover.

The puppeteer tools creating a bright X can only lead you to guess what will be brought in to complicate an already deteriorating situation.

Avengers Arena covers have not always been very topical or about the characters centrally highlighted in that month’s books. This cover almost seems to hold a promise that is not true this month. I hope so.