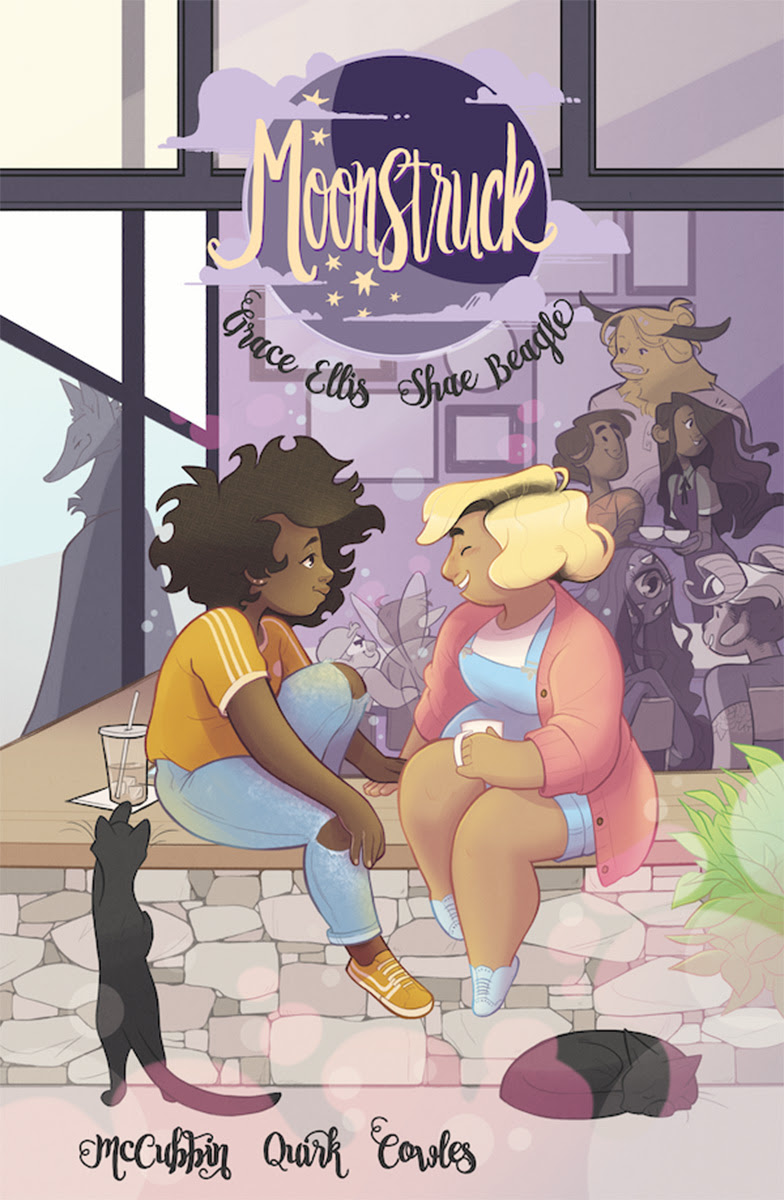 Werewolf barista Julie and her new girlfriend Selena go on a date to a close-up magic show, but all heck breaks loose when the magician casts a terrible spell on their friend Chet. Now it’s up to the team of mythical pals to stop the illicit illusionist—before it’s too late!

MOONSTRUCK, VOL. 1 arrives in bookstores Tuesday, March 27th. It is available for preorder via Amazon, Barnes & Noble, Indiebound, and Indigo.

“MOONSTRUCK makes me happy just thinking about it. I love everything about it. The first issue is a dreamy delight, a slice of life comic infused with queer romance and intersectional diversity.” —Tor.com

“With cute artwork and a fun plot, this is a great read for fantasy fans.” —YALSA’s The Hub

“In a year that often felt dark and dystopian, this delightful series from writer Grace Ellis (Lumberjanes), newcomer artist Shae Beagle, and editor Laurenn McCubbin was a wonderful escape. This world is populated by fantasy creatures who are also comfortable in their diverse identities, from lovestruck werewolves Julie and Selena to the upbeat non-binary centaur Chet.” —EW.com

“One of 2017’s best romantic comedies in comics, and proof we need more of them.” —Uproxx

“I genuinely loved the world Ellis and Beagle created. Their storytelling presents a creative way to talk about ‘otherness’ and self-acceptance. Most importantly, it’s really fun.” —Amy Poehler’s Smart Girls

“In a space where every lycanthropic tale we get is male-dominated and aggressive, it’s a real treat to meet MOONSTRUCK’s protagonist, Julie, a barista in a world full of fantastical creatures that live among humans.” —Nylon

“A light-hearted twist on mythical monsters that is rooted in relatable personal dramedy.” —AV Club

“Finding a fantasy world this compelling and immersive is a rare gift.” —Rogues Portal