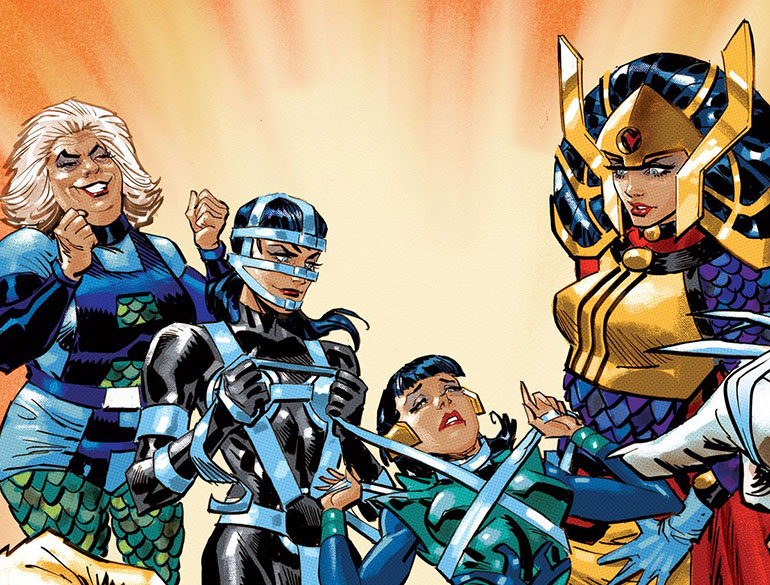 I recently joined a comic book club in my city. During our recent meet we discussed Tom King’s Mister Miracle, so it was inevitable that the new Cecil Castellucci and Adriana Melo’s Female Furies series came up in conversation.

One of the moderators mentioned reading about how the new series was absolutely terrible; that beauty pageants didn’t quite make sense on Apokolips.

I bristled at this statement and immediately jumped to the Female Furies’ defence. I categorically explained that the series was like no other comic book, and that was precisely the point. It wasn’t necessarily our fellow member’s fault for thinking the worst about the series; you read enough poor headlines and you will believe anything. But reviewers should know better. 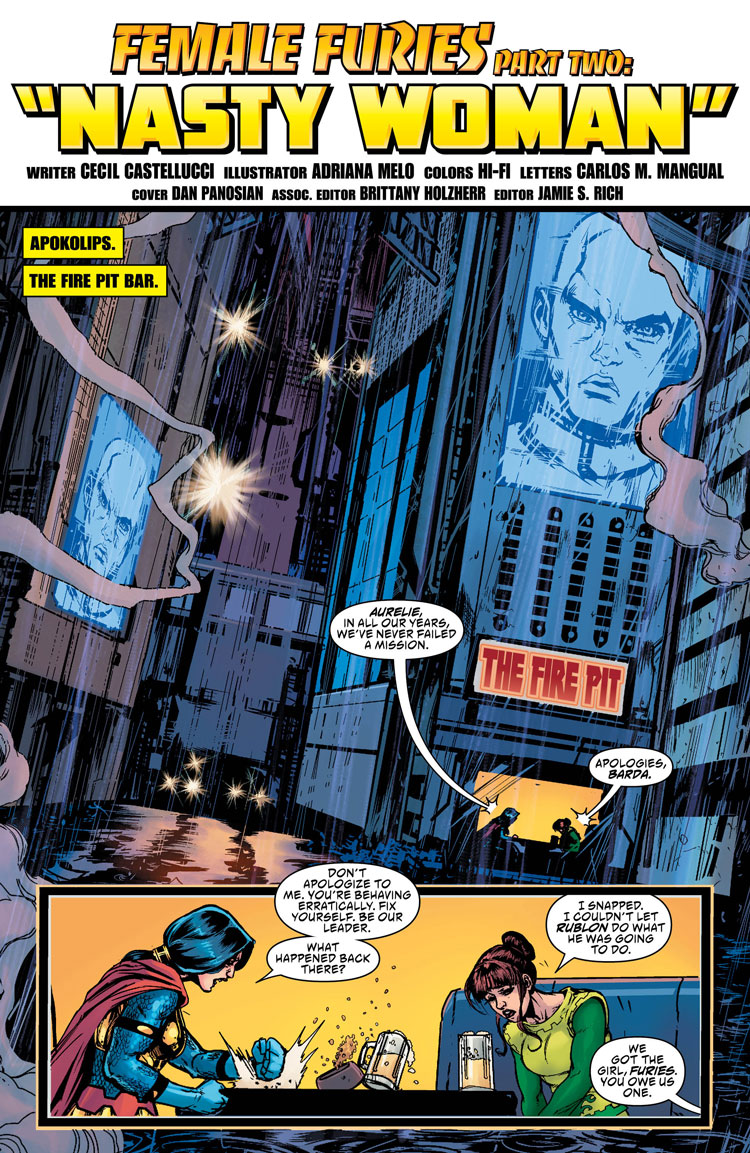 As someone who isn’t a Fourth World reader, Mister Miracle and the Furies are all unknowns to me. I read them with a blank slate. As a result, reading Female Furies #1 was difficult, but the second issue (out last week) felt nigh impossible to get through.

And that is precisely why it needs to be read and written about. The problem is that Female Furies’ examination of real-world patriarchy is still very singular: could Castellucci and Melo attempt to explore more aspects of gender discrimination?

For those not in the know, Female Furies takes place on Apokolips and looks at the gender politics and patriarchy through the eyes of the formidable women warriors and their guardian, Granny Goodness. These women are on par with all the men on the planet, yet Darkseid, ruler of Apokolips, insists on deploying only his male fighting force.

Considering Apokolips is under threat from sister planet New Genesis, Granny Goodness would rather see the planet at full force with Darkseid’s men and the Furies at the front. Unfortunately, nothing the girls do can convince the misogynists of their might. 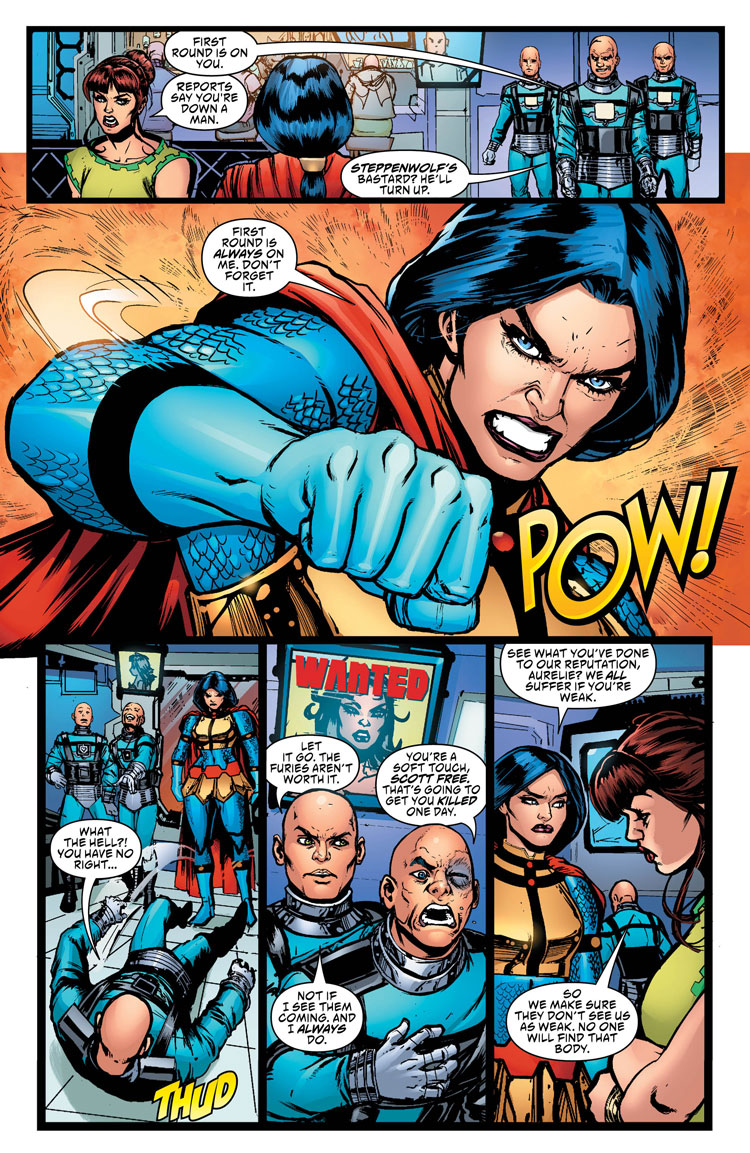 What’s worse, Furies leader Aurelie is constantly taken advantage of by one of Darkseid’s counsellors. Protector Wiliks is the epitome of a chauvinistic pig, who can’t (and doesn’t) keep his hands of the unwilling Fury during their ‘training’ sessions. Despite Aurelie’s vehement attempts to avoid Willick, Granny Goodness insists she do his bidding.

In the second issue, just how far Protector Wiliks pushes his luck with Aurelie becomes abundantly clear, as does the divide between Aurelie and the rest of the Furies. They see her as being lucky to get special attention and believe it’s because Aurelie is conventionally attractive, hence the interest. They don’t see how Aurelie is suffering, because the rest of the Furies feel like they’re being denied an opportunity because of their looks.

None of this is easy to read. If you’re like me, your blood pressure is likely to hit the roof and you will see red. The majority of the panels with Wiliks and Aurelie are devoid of text and Melo does not hold back in presenting the assault(s) to the reader. The scenes were not designed for enjoyment, but certainly were made for effect. 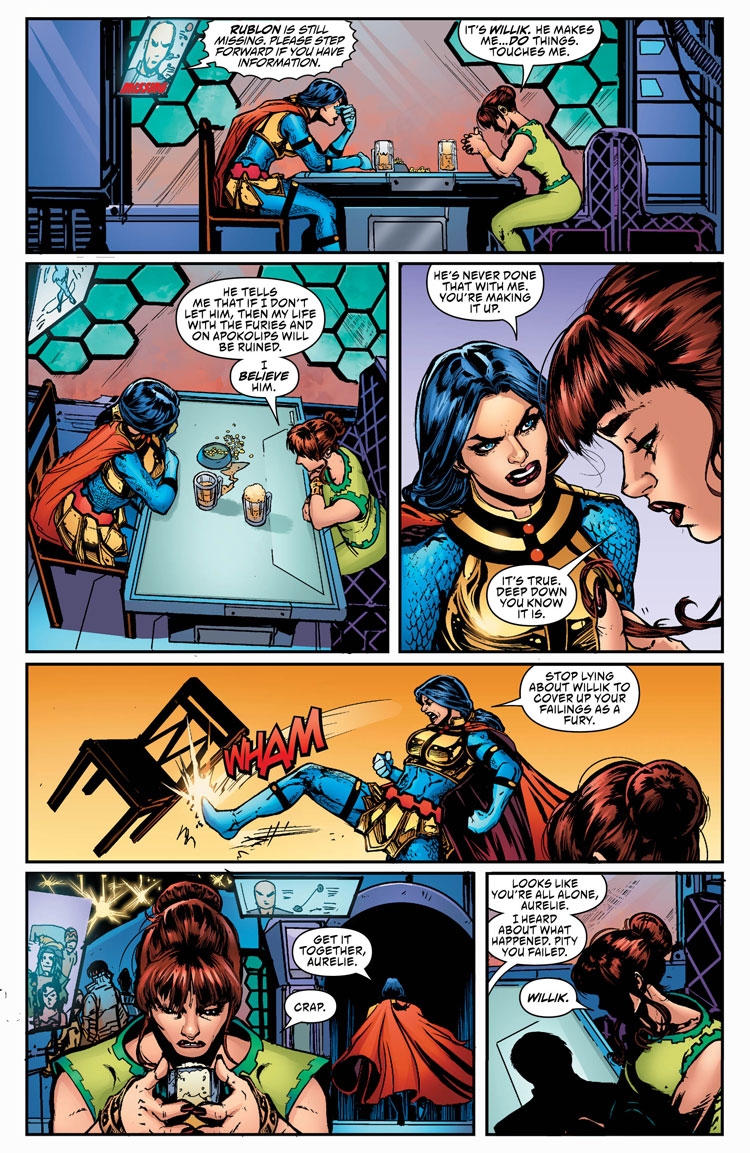 As Female Furies stands now, the focus is primarily on the chauvinism rampant in every level on Apokolips, as well as Aurelie’s suffering and isolation. The rest of the Furies come across as petulant mean girls unable to support their sister.

This is a very singular view of how the patriarchy discriminates against women (for the purposes of this piece, I’m leaving out race and non-conforming gender identities since the series has delineated the same).

Virtually every person presenting as a woman in the real world has faced harassment and/or assault. This goes beyond sexual harassment and rape – the degrees of how the harassment affects the victim is personal. Without a doubt, the rest of the Furies have been at the receiving end of microaggressions that hamper their daily life as well.

For one, most of them are conventionally sized, which means they would have attracted the attention of the men irrespective of how attractive Aurelie is. Despite this, Barda may have been mocked for being too manly because of her height; Mad Harriet and Bernadeth belittled for their looks. Worse still, Stompa would no doubt have been taunted for her weight. 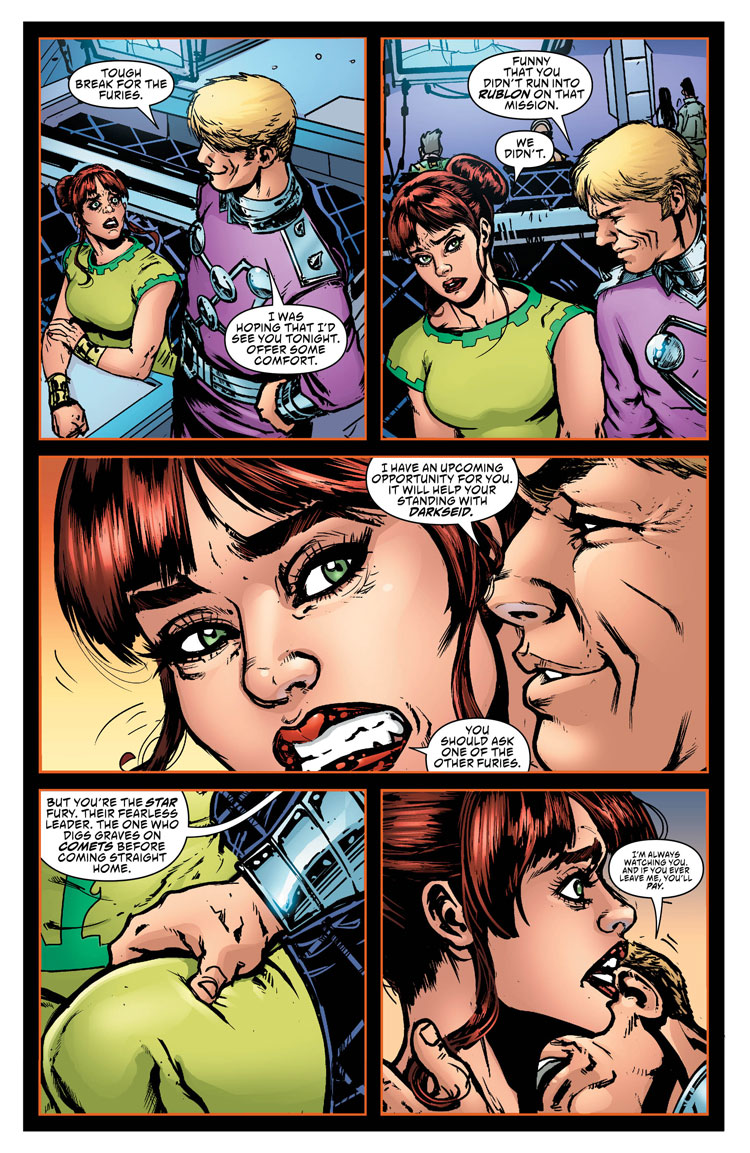 These are all unfortunate aspects of identifying as female in a world run by men, many of whom believe they are entitled to women’s attention. By that analogy, all the women surrounding them must be appealing to them; if women are not, then they must be derided at every turn.

For this reason, entertainment media is almost always exclusively populated by slender women even when they’re extras in a scene. Men, on the other hand, get to be all shapes and sizes, and be entitled to ‘get the hot girl’ at the end. That’s why I wonder if Castellucci and the creative team behind Female Furies will be delving deeper into this part of the female experience more than they currently are as the series goes on.

Women have to face derision from all corners because of this kind of thinking – from everyone including families and strangers on the street – and, there are blatant and latent messages being absorbed every moment of the day of what makes a ‘perfect woman’. Could Female Furies include these elements into its storyline?

By making the ‘hot’ girl the unfortunate victim of her team’s jealousy is to deny the involuntary privilege that comes with being perceived as the norm. Aurelie’s story must be told, but alongside it so should the possible stories of the rest of the Furies. 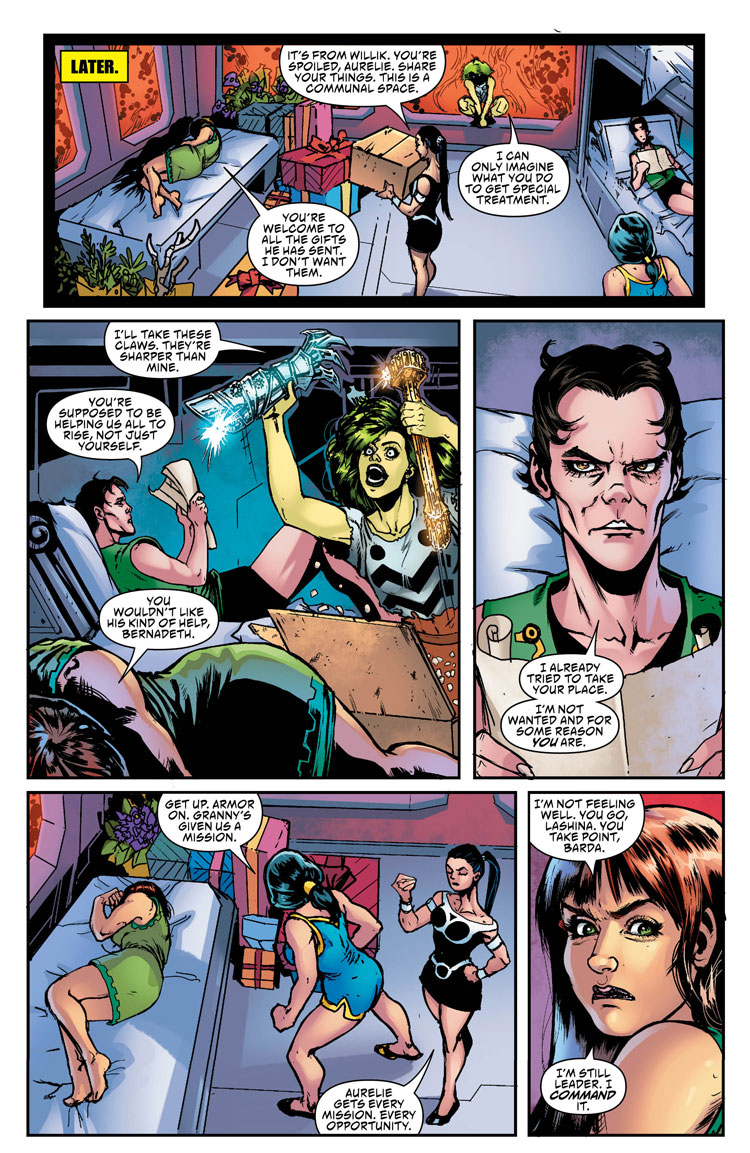 Admittedly, this could be asking too much of one series. I already feel like Female Furies is preaching to the converted, because how many men are going to pick up this series since its all about women and their perspective on patriarchal standards?

The bigger question is: shouldn’t these themes be absorbed into ongoing titles? They should be part of Batman, Superman and every other DC Comics title, because that’s the only way the message will reach the intended target. For now, we have Female Furies, and hopefully, this and other series can do so much more, if DC executives are willing.