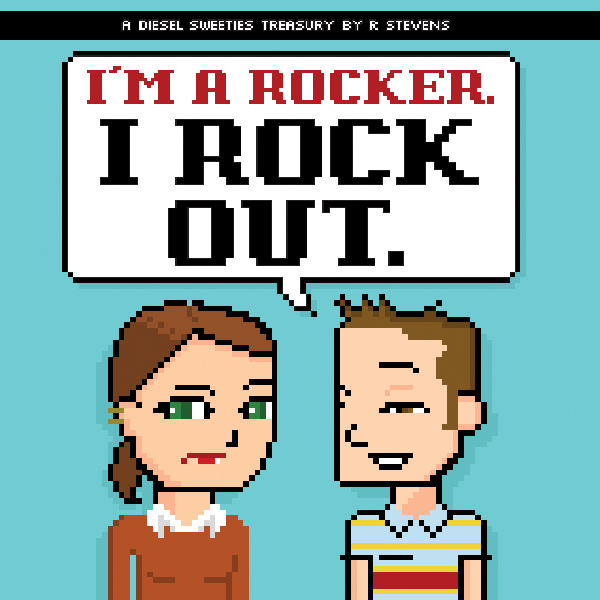 Oni Press has announced the hardcover & softcover editions of Diesel Sweeties will hit stores this Wednesday, September 11, 2013. In other news, R. Stevens has become the Internet. 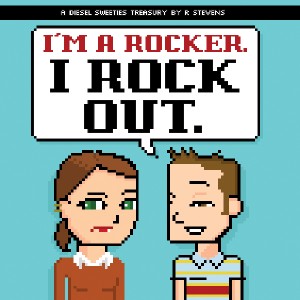 September 10, 2013 (Portland, OR) – Shocking fans, battery wholesalers, and his many cats, pioneering web cartoonist R. Stevens disappeared last Monday from the art-deco mineshaft he famously confined himself to since starting the world’s most popular webcomic DIESEL SWEETIES in 2000.

Neighbors began to worry when Stevens’ daily shipments of live goats began to pile up undevoured outside his door, prompting a call to the police and the discovery that the enigmatic genius had simply vanished. Those on the scene described the smell as “copperish” and “vaguely heavenly.”

The first clue of Stevens’ transhumanist folk heroics reaching their zenith came from a suitably esoteric origin. The valiant hordes that still maintain Nintendo Virtual Boys were alerted to their red-soaked migraine generators having picked up a strange LTE signal last week. Representatives from Nintendo of America indicated that under no circumstances were Virtual Boys equipped with even the most rudimentary technology capable of interpreting such a signal, but alas.

Through the blinding electronic din, those steadfast and lucky few were met by an image of their new pixilated messiah, cradling a cat in each arm and beckoning them forth.

Usenets across the globe reported seeing a similar image, followed by a mysterious message: “Awesome. I AM ALL. RS3.”

The reaction from the public was remorseful and swift. Coffee stocks plummeted, cats gathered from around the world at Stevens’ favorite donut shop to hold a round-the-clock vigil, and many of the world’s record store owners simply set their shops ablaze and moved back in with their parents.

Vice President Joe Biden attempted to soothe a grieving planet Monday night, but was overtaken by his emotions, saying “I’m gonna need a few weeks, you guys. This is really messed up. I know it’s silly, but in my heart of hearts, I really hope this is some kind of bizarre stunt. I just don’t know what I’m gonna do without Indie Rock Pete.”

Stevens was remembered as a beautiful enigma. Many claimed he was a time traveler trapped in our unsophisticated time and that his comics were coded attempts to dispatch an S.O.S. to his time traveling brethren. Multiple universities across the globe began graduate programs to try and unravel these theories, but most that undertook the course of study were simply driven mad by the caffeine prerequisites.

Many people have come forward over the years to try and shed some light on Stevens’ life before DIESEL SWEETIES. A number of bears across Canada and parts of Alaska had reached out to the public in 2003, claiming that on a backpacking trip, Stevens had faced them all in mortal combat, besting them with minimal damage to himself and hitting them all so hard they were granted the power of speech. True to form, whatStevens began as a primal ritual resulted in a thunderous gift of knowledge.

It’s a record that is at best, unbelievable, and at worst, calls into question nearly everything modern civilization has come to believe about its origins. An unidentified researcher at CERN recently claimed to have seen Stevens’ family crest after successfully colliding two subatomic particles at the speed of light. The researcher claimed that after considerable buffering time, the particles yielded the story of a long lineage of curious travelers hailing from a distant, long-dead world, seeking their place among the stars.

At press time, there’s no way to be certain what’s true and what isn’t. Though he seems to be a benevolent digital deity, Stevens has assumed control of all digital sources of knowledge. A representative from the NSA was quoted as saying “It’s like Wikipedia, IMDB, or the Fed. There’s no way to be sure some guy didn’t just make that all up.”

Seeing no viable long-term solution, global agencies are urging citizens to simply comply, act as if nothing has changed, and ignore the roving bands of red robots being spotted worldwide. “Hey, those robots could be cool. We don’t know. I’m just gonna post up for a high five and see what happens,” Vice President Biden said through hopeful tears in a later interview.

“All we can do now, is hope that Stevens uses his infinite power to remake this turd of a planet in his own image, ya know?” Biden continued. “More donuts and cats. Stuff like that. I don’t know, man. That sounds pretty awesome to me. We could all use a little more DIESEL SWEETIES in our lives as far as I’m concerned.”

In response to this global maybe-crisis, Oni Press is pleased to announce the peaceful, possibly mandatory offering of DIESEL SWEETIES: I’M A ROCKER. I ROCK OUT,the first in a series of now-sacred tomes chronicling the firing neurons of our new God. “It may only be a book, but I’m sure some doucher said that about The Bible, too,” saidBiden.

DIESEL SWEETIES: I’M A ROCKER, I ROCK OUT will be in stores September 11, 2013 in a full-color softcover and available as a deluxe, clothbound hardcover from OniPress.com.