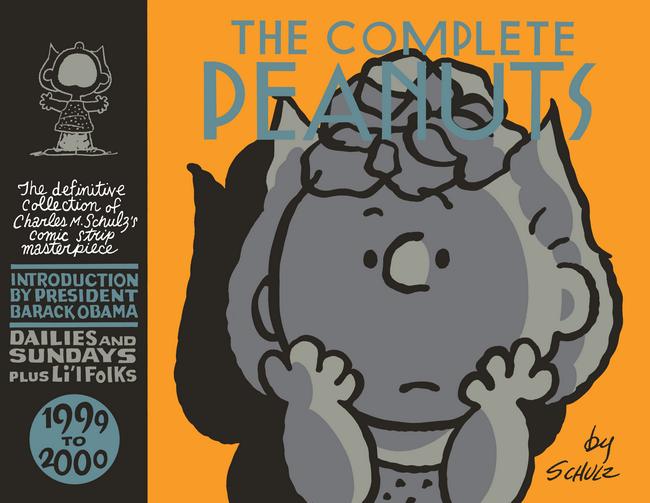 MARCH 7, 2016: SEATTLE, WA — Fantagraphics Books is proud to announce that President Barack Obama has penned the introduction to the long-awaited 25th volume of the award-winning Complete Peanuts series! As announced in Monday’s New York Times business section (link), “Obama pays tribute to Charlie Brown, Snoopy and the Peanuts gang” in the latest volume of Fantagraphics’ beloved series, which began in 2004 and wraps up this year.

“In his final strip, Charles Schulz wondered how he could ever forget the Peanuts gang,” President Obama writes in The Complete Peanuts 1999–2000 (Vol. 25), which covers Jan. 1, 1999, through Feb. 13, 2000, when the final Peanuts strip was published the day after Schulz’s death. “Thanks to this groundbreaking series of books collecting all of Charles Schulz’s Peanuts strips, the rest of us never will…”

This volume features another big surprise: the complete Li’l Folks, the weekly one-panel comic that Charles Schulz produced between June 22, 1947, and January 22, 1950 the creative precursor to Peanuts and its inclusion in volume 25 brings The Complete Peanuts full circle.

The surprises do not end with the President, or with Li’l Folks. Although Fantagraphics collects the final Peanuts strips in Vol. 25, it is not the end of The Complete Peanuts. A surprise 26th volume is announced for October 2016, collecting all of Schulz’s non-strip related Peanuts art: storybooks, comic book stories, single-panel gags, advertising art, book illustrations, photographs, and even a recipe.

Schulz’s widow Jean Schulz will write the Afterword to volume 26, capping the final volume in a star-studded lineup of contributors to the series with a personal reminiscence of her life with Charles Schulz. The Complete Peanuts is the definitive collection of the most critically and commercially successful comic strip of the 20th century, reprinting every single one of the almost 18,000 strips created by Schulz between 1950 and 2000. The New York Times best-selling series that launched in 1994 has over a half-million copies in print and continues to bring joy to readers of all ages all over the world.