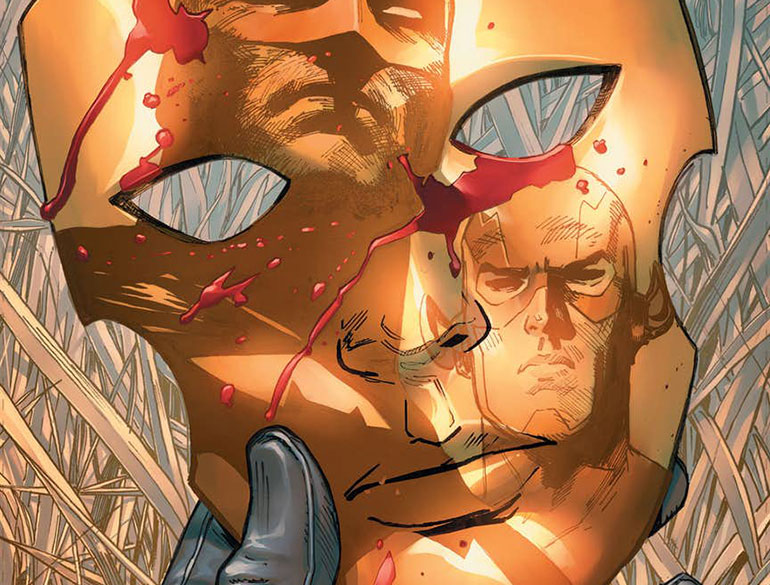 Comics like the currently on-going Heroes in Crisis story by Tom King are probably the hardest to critique. I feel like something is wrong with it, yet the subjects around which the story revolves, therapy and trauma, are things about which I know little outside of anecdotal evidence and experience.

Or, to re-state the premise here, I am not sure how to critique a therapy story with just the perspective of my own (very human, non-super-being) pain.

I’ll start this by saying that I feel the premise of Heroes in Crisis is exactly the kind of story DC (and other companies) should be examining. Nothing against comic which showcase action and sheer entertainment-for-the-sake-of-it, but examining characters and gaining empathy for their lives is one of the most important roles literature serves. The subject of mental health, almost by its very nature, demands that readers begin the process of investing emotionally in the characters said narrative focuses on. 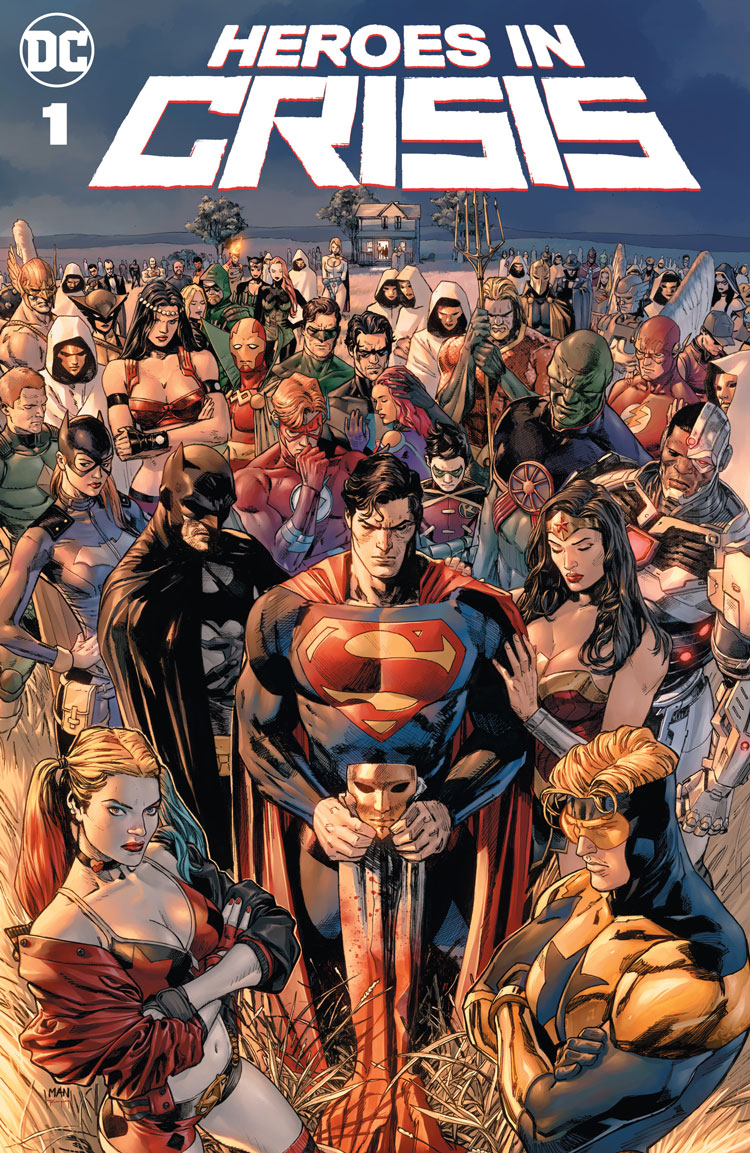 Having addressed that, it is unfortunate then that I have to now say that Heroes in Crisis is becoming a showcase for exactly how companies should not handle their characters.

If I have to pick a way to phrase this — and I am sure I’ll be messing things up here — I have to say Heroes in Crisis is manifesting as a sort of a cerebral version of the Saw franchise.

Anybody who went into the theater to see any of the Saw films knew the premise, right? Weird traps + spooky atmosphere = horror. It was lightning in a bottle. It is important to remember then that those films were honest about what they were. As disgusted as somebody could have been by them, their creators were genuine about “what” they were. Heroes in Crisis, and my comparing it to the Saw franchise, is something I want to write through here and dig into because, again, this comic is becoming a showcase for something I might have to say is a little dangerous (on the hyperbolic side) or at the very least in poor taste (on the simplistic side). I am aware that my reading and perspective on this could be way off, and I am prepared to acknowledge any shortcomings my reading of this obviously unfinished series has.

I can get behind heroes being and doing heroic things. I have long been a fan of superheroes as a set-piece for all kinds of stories, from the lighthearted to the super-serious varieties. Heroes in Crisis began, or rather seemed to have been pitched, as a murder mystery involving Sanctuary, the superhero recovery clinic which was established by Wonder Woman, Superman and Batman. What we have seen thus far of the Sanctuary space has been extremely limiting, but I think one sequence stands out the most as one of the most distressing things: Lagoon Boy being killed, in a sense killing himself, over and over again. 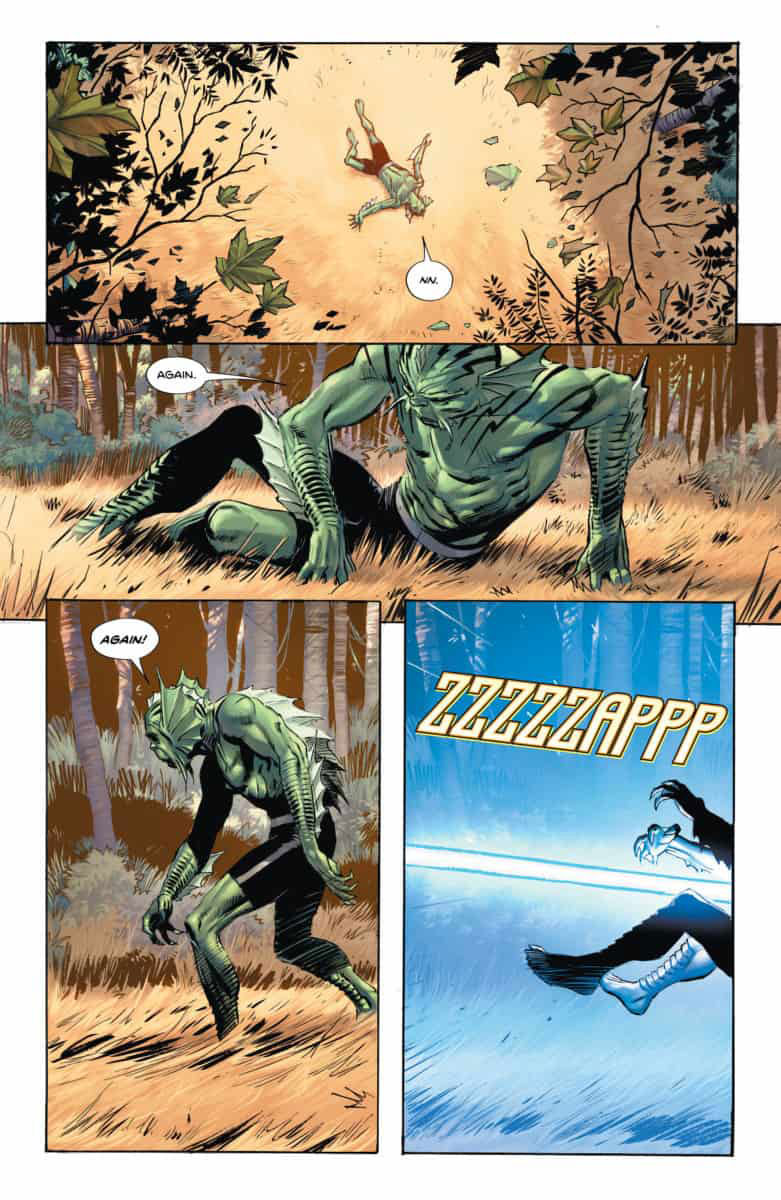 This sequence is one of the many things which sort of makes me think about Saw, but not just because of the physical violence alone. What was impactful (and obviously stressful) about Saw as a franchise was that it focused on a villain who forced people to push through some manner personal pain they were holding onto as a means of helping them affirm that life was worth living. His methods, alas, involved grizzly traps. Viewers would never consider the tortures inflicted upon the characters in that series to be worthwhile as therapy because they were being forced into it unwillingly.

So, having said that, what is different, exactly, about a place where the “therapy” provided allows for anything, seemingly without guidance? The A.I. of Sanctuary asks some questions of those it “helps,” but it seems to provide no measure of discernible control, or even concern, over what is being asked of it. For a building constructed from the “compassion of Wonder Woman,” among other things, the therapy provided to some of these characters is torture.

Although there could be countless scenarios where characters are counseled through their pain, the premise appears to show Sanctuary having characters push through their emotional pain … with more pain? Why would a character who is traumatized about the absence of his family be allowed to re-visit them, again and again? Why would a character be allowed to re-enact their own evisceration again and again? Hundreds of times, no less? 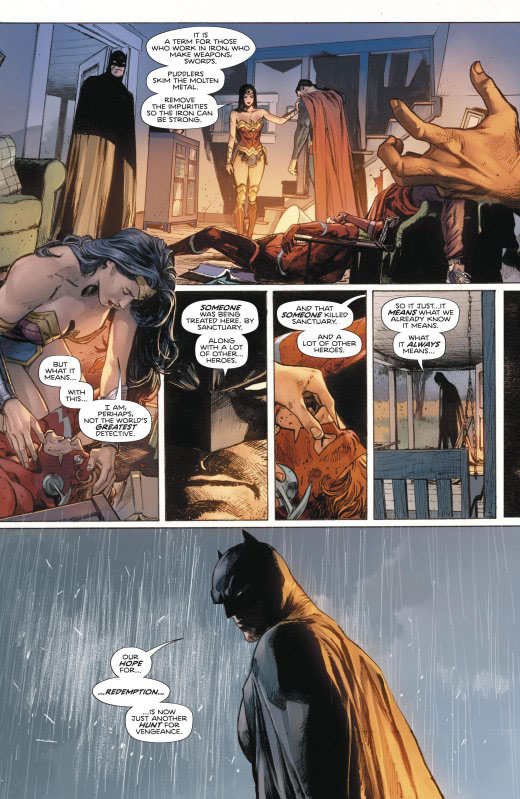 Batman explains how this entire set-up is anonymous, meaning characters come and go to and from Sanctuary with, apparently, no manner of oversight into 1) who is coming in and out, 2) what is being asked of the A.I., and 3) if any progress is being made on some kind of observable method or plan.

I am disturbed by the notion of what King is trying to imply about therapy and heroics, and I am making this premise as a feeling based on a lack of knowledge about how the story ends. I am also making this judgement based on a lack of awareness concerning any trauma King has gone through himself or has helped others through.

Still, at this moment, as the story stands now, I feel like I was lured into seeing heroes getting better only to see them be painfully hurt. I always knew a murder mystery was involved, but I was unaware that the idea of Sancutary now seems like bait, a great idea put on the end of a marketing hook. I cannot revel in the plot as “entertainment” because it is steeped in death with, presently, nothing hopeful at all to focus on. 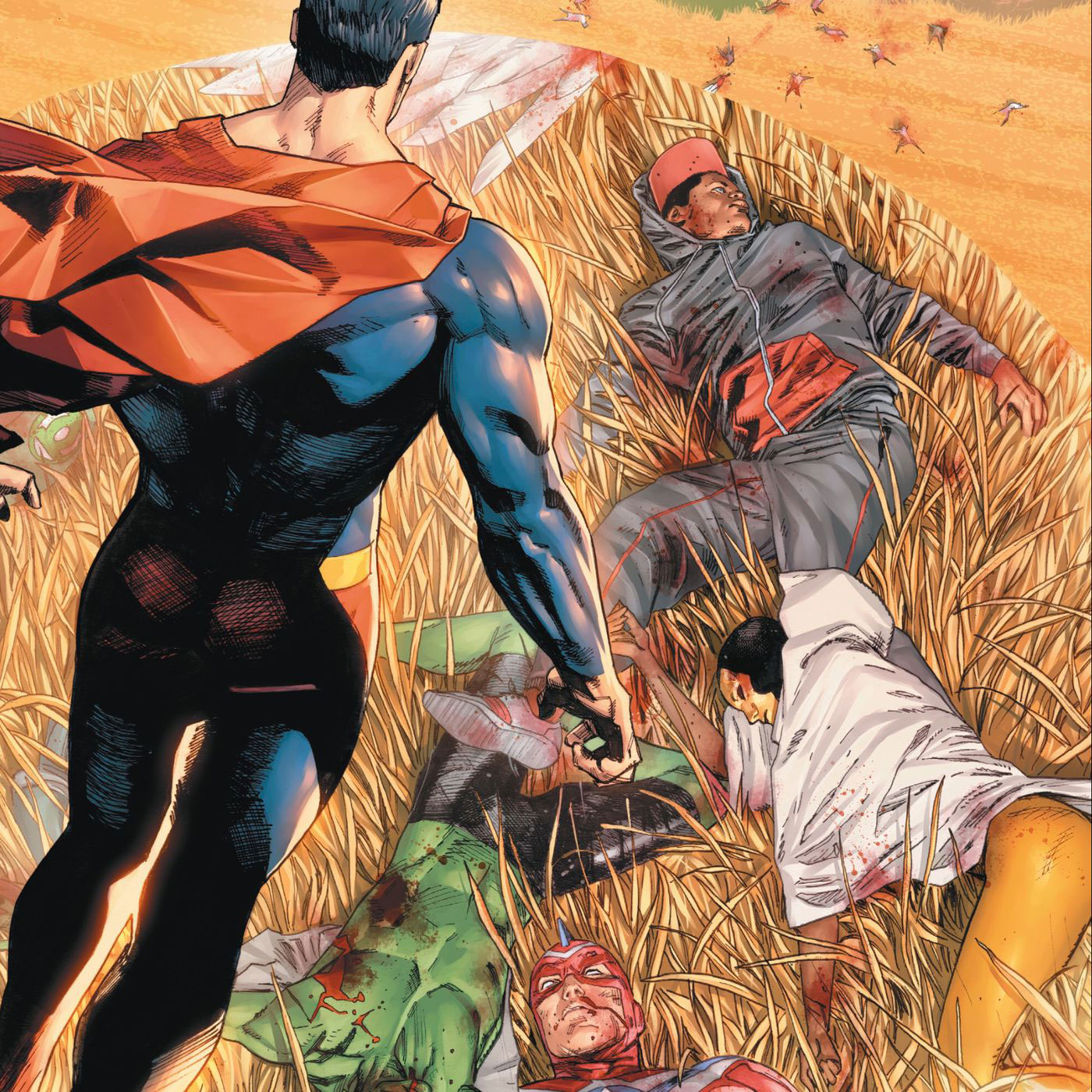 I have read plenty of violence/action-focused comics, but, as I have been trying to establish here, those comics are open about “what” I’ll be reading. What is the message that King is going for, that heroism and its traumas are things these characters will inflict on themselves if they’re allowed to? If so, why are they at Sanctuary at all? The “therapy” narrative device seems to be exacerbating the recovery of the people who are seeking aid.

I know what I wish could have happened: I wish Sanctuary had been allowed to be a part of the DC canon for a time, possibly even just a year at minimum. I wish I would have seen heroes and even some villains get help. I wish I could have seen this place functioning and to get the sense it was meant to be before it was tainted by a massacre.

The opening of Heroes in Crisis has poisoned me to the whole idea of what this place is before I am even allowed to see inside. Still, things are what they are now. Sanctuary is shaping up to be a dark take on therapy and I feel nauseous about that. I feel nauseous about Lagoon Boy, a character I don’t even especially like, being allowed to torture himself and be told it “helps.” 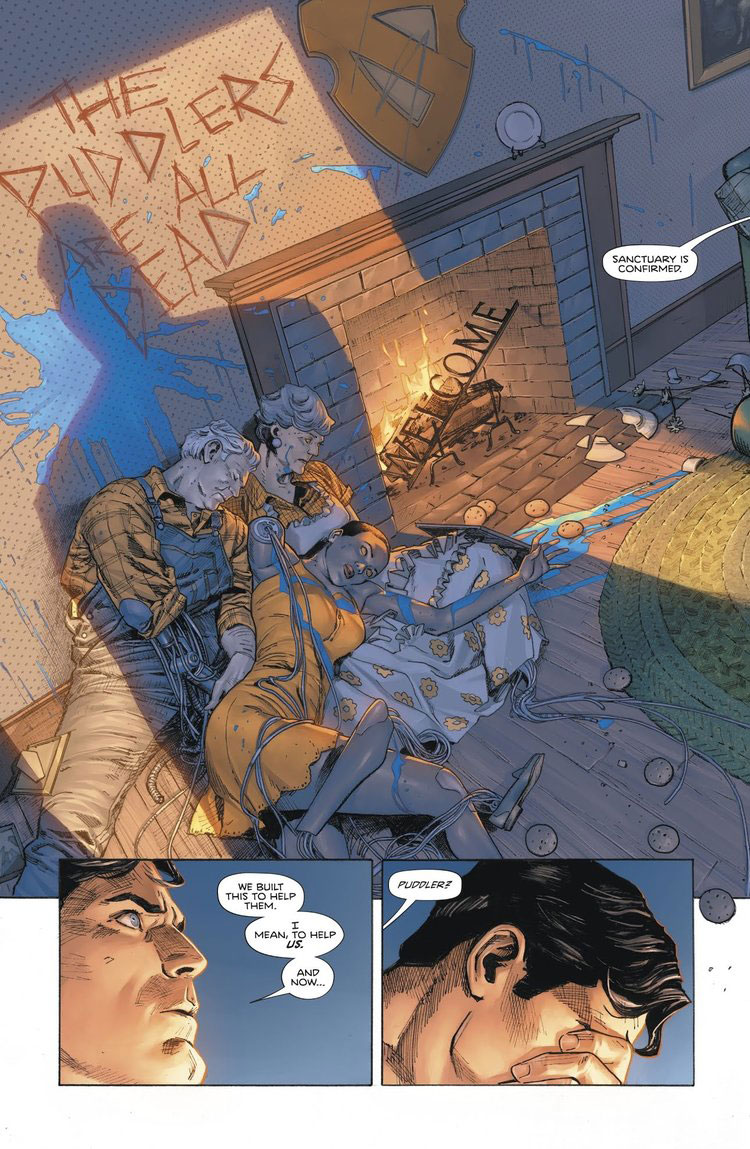 I am not sure if this work is, in a very real sense, therapy for King himself and I am not sure how to address that beyond simply raising that concern. I know what hurts me, as an abuse victim, so it is hard to watch heroes be subjected to pain and have it them presented in a context where I am to ever believe it was “helpful.”

I want to help the characters I am reading about, and I can’t. Empathy is the act of caring for others and their concerns or values, it is getting to know somebody and to inquire as to what makes them who they are. This comic establishes a premise of empathy, but what is really seems to be morphing into is a work which is eliciting apathy, or perhaps a kind of emotional numbness? I am perhaps not finding the right word here, but Lagoon Boy’s “response” to his “treatment” seems to be how I fear I’ll feel by the end of the story and all the death.

I am afraid I’ll ultimately just feel nothing for these characters once the shock of their murder and/or therapeutic torture wears off. Remember how I wrote earlier in this piece that Lagoon Boy wasn’t really a character I exactly felt anything about? Well, unfortunately, I do now and it’s a mixture of grief and horror. But, this connection is not genuine, it’s rooted in shock-value concepts. It’s a (to keep with my horror theme) a “jump scare” version of empathy, a quick burst of trauma punctuated by the queasy feeling of stillness once it passes. 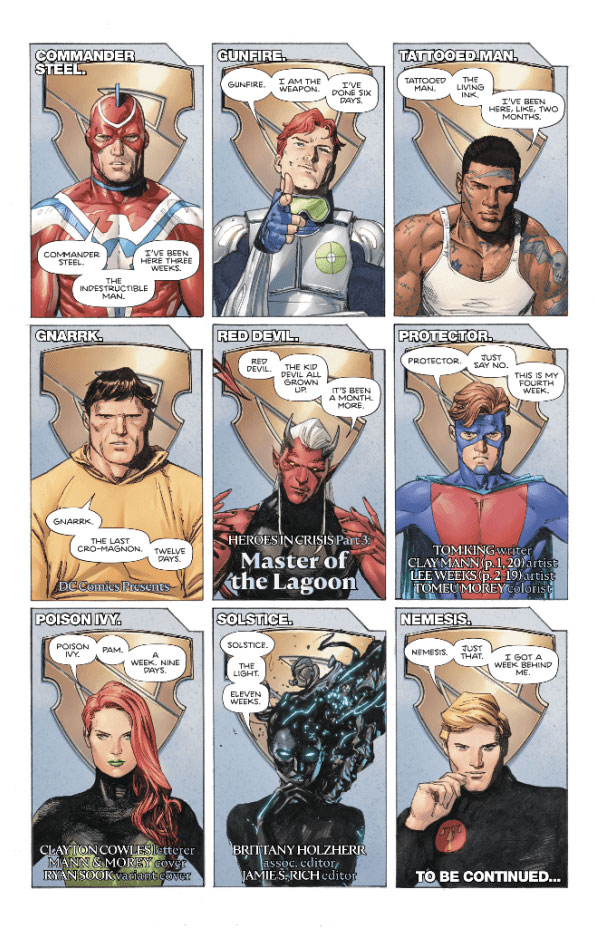 I feel sort of unclean about how this event has been marketed and presented and that, now, I feel obligated to read to the end of this story to see if I am wrong, that the whole story is an elaborate “V.R. simulation” or some other manner of comic contraption. I want to be wrong about Heroes in Crisis, but I don’t think I am. I know King can write wonderful work because the Mister Miracle series is beautiful and life-affirming, it is a glimpse into how family and love serves as the best salve to our worst pains.

Heroes in Crisis is the dark opposite of that fantastic series.