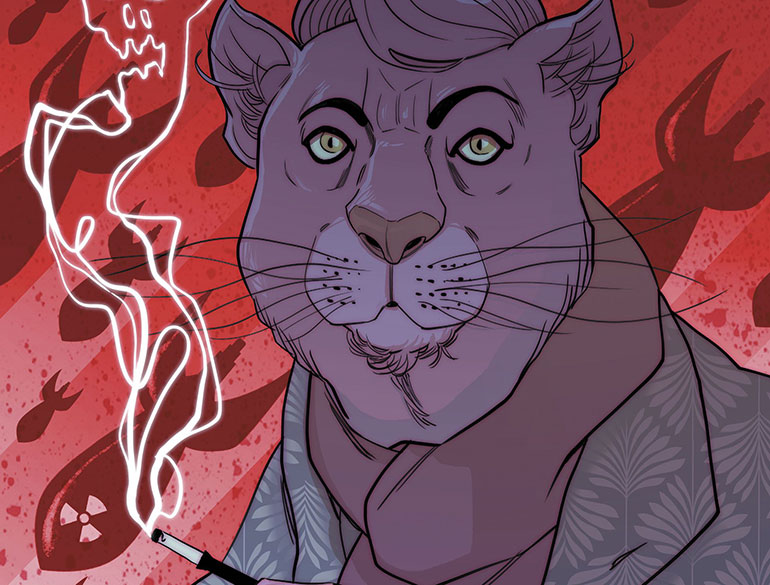 There will always be enemies. Time to stop being your own.

I don’t remember how old I was the first time I was called a faggot.

It was certainly many many years before coming out. And I think it’s fair to say I’ve been called it far more in the years since, although heard it uttered in my direct presence far less.

It’s a cowardly word, “faggot.” It wields power, of course. If it didn’t, no one would say it. But like other slurs, it reflects more on the speaker than it does the object, although invariably, it is always the object of the speech that bears its ontological burden. Always.

I’ve seen it scrawled on my school locker. I’ve heard it spat in a locker room. I’ve heard it from behind the nozzle of a pepper-spray canister and I’ve seen it fly into my Twitter mentions more times than any reasonable person would bother counting.

That said, I don’t have that complicated a relationship with the word. It doesn’t crush me to bits or send me spiraling back to middle school. I understand its usage. I understand the people who use it. More than they understand themselves, I’d barter. I am what they seek to describe, after all, however offensive the term is.

I daresay it’s not a word, like “queer,” that’s been robustly reclaimed and accepted in academic circles for a quarter century easily or more. Nor is it comparable to the n-word, which has deep institutional history tied to literal human enslavement and is not in any way my place to opine upon.

No. “Faggot” hovers in this in-between space of largely remaining a deeply hurtful term, particularly for more effeminate gay men, when uttered by either straight or queer persons, and a catty retort by queer people alone toward other queer people.

But it is a word that has history. A word that, for some, is indelibly engraved into our queer cultural history, annals which I believe strongly matter. It’s cliche to say, “Those who do not understand history shall be doomed to repeat it,” but the reality is, we may not have the choice but to repeat what are terribly dark times in American history. And an even darker reality is that many still live it whether we want to acknowledge it or not.

“Faggot” means being kicked out of your apartment or community because a man was seen leaving in the early hours.

“Faggot” means getting arrested for disturbing the peace, for solicitation, or for resisting arrest when standing outside a gay bar.

The word doesn’t just have history. It is history. And our present. It represents every fear, every danger, and frankly, every death, among gay men from the early 20th century until today. 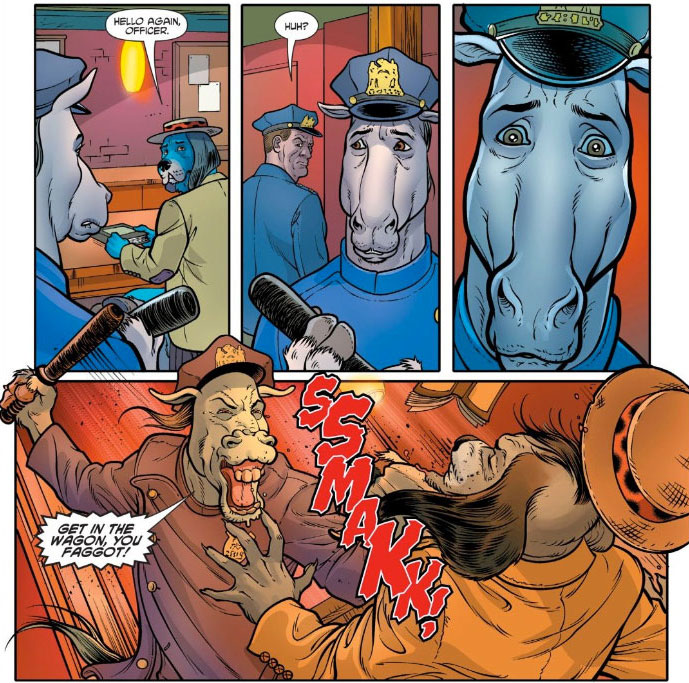 So, to see it grace the page in last week’s Exit Stage Left: the Snagglepuss Chronicles — DC Comics’ reinvention of the classic Hanna Barbera character as a McCarthy-era, closeted gay playwright — is apt. I would say important, even.

As the book has endeavored to replicate much of the fear and psychological weight of the gay male closet that suffocated queer culture in the 1950s in America, and remains a not-inconsequential factor in queer development today, writer Mark Russell developed the ramp-up to its utterance in possibly the most painful manner possible: through the betrayal of a gay man (dog) by his closeted gay lover (a police horse).

Hucklberry Hound’s journey to the confrontation had already been punctuated by violence, carefully laid out in the narrative by Russell and artist Mike Feehan, as they illustrated Huck’s arrival on the New York cruising scene.

Huck’s naïveté as a small-town closeted dog, is itself a particularly important piece of queer history, as men have migrated from rural to metropolitan areas for decades (still do) looking for sexual and emotional freedom. The resulting backlash from a propositioned man, while physically dangerous to Huck, was remarked upon with banality by Snagglepuss and other onlookers — a violence which was both life-threatening and envisioned with a terrible normalcy.

If the word “faggot” disrupts that sense of normalcy for the reader in issue #4 — never mind the crack across the face of a police baton — then it is only because of one fact: you are not a gay man living in America in 2018, much less in New York of the 1950s. 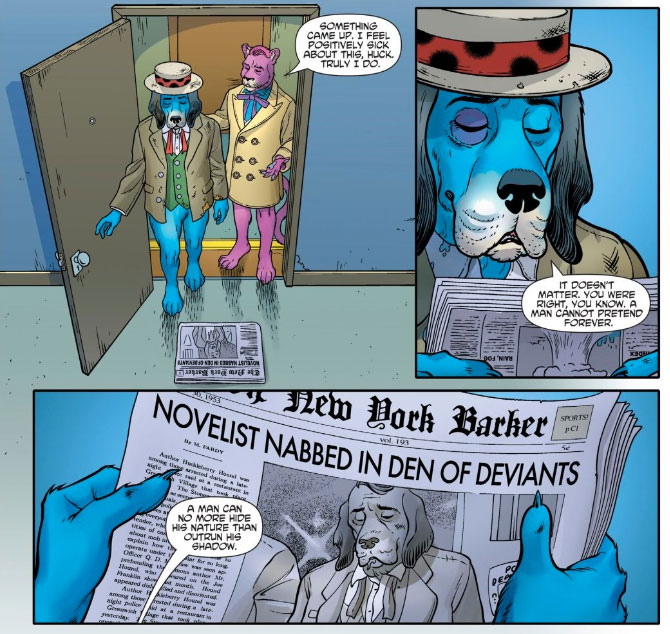 And so it surprises me to see critics — albeit straight men — decry the use of “faggot” in this scene, and in fact, not seem to even be able to utter the word itself, simply remarking in one case, “the use of one particular word is entirely uncalled for.”

It ignores a key question of “Who benefits?”

Who benefits when a straight writer uses the word “faggot” to shock and awe in a largely straight narrative? Who benefits when critics dismiss outcry by queer people as uniformed or “unsatisfied,” as if we’re asking too much not to be used as the brunt of a joke in a narrative we aren’t even allowed access to?

Who benefits when the word is then considered verboten in a story of our own history, treated as unnecessary or over-the-top or trite?

It’s not those of us being called faggots. I promise you that. 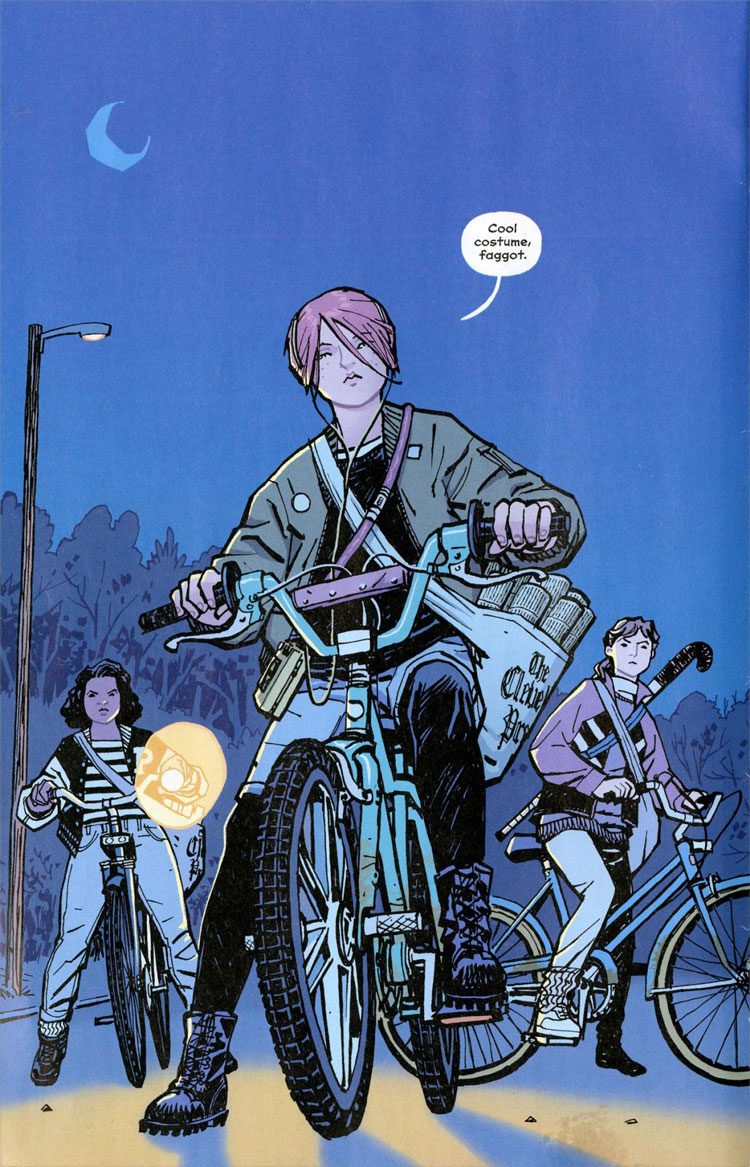 The reality is, if you do not feel comfortable saying the word out loud, you probably should be close to realizing that it’s not your place to decide when and where it’s acceptable to use. And if you’ve never been at risk of being called it and have it actually hit the target, it’s time to sit down.

Not that erasure of the abused or feminized gay man is exclusive to straight interlopers. In fact, gay culture (and I make this distinction specifically, as it doesn’t seem to carry through nearly as much in the lesbian, bi, trans, or growing non-binary subsets of queer culture) frequently exhibits its own backlash against any representation that would supposedly lean into stereotypes we’ve been exposed to for decades: the effeminate homosexual male.

It’s a pattern in comics that repeats itself, from outcry over the depiction of gay Mexican teenager Bunker in DC Comics’ Teen Titans, to more recently, in online backlash against writer Joe Glass’s creator-owned series The Pride, and one of its protagonists, Fab Man.

The idea that, in a large crowd of queer characters diversity should mean including an effeminate gay man, seems utterly inhospitable to a number of gay male readers. Posters on Facebook expressed that, “These kinda of stereotypical ideas of gay men should be stamped out.”

Except, we exist. Effeminate gay men exist. We’re not every one. But we’re not no one. 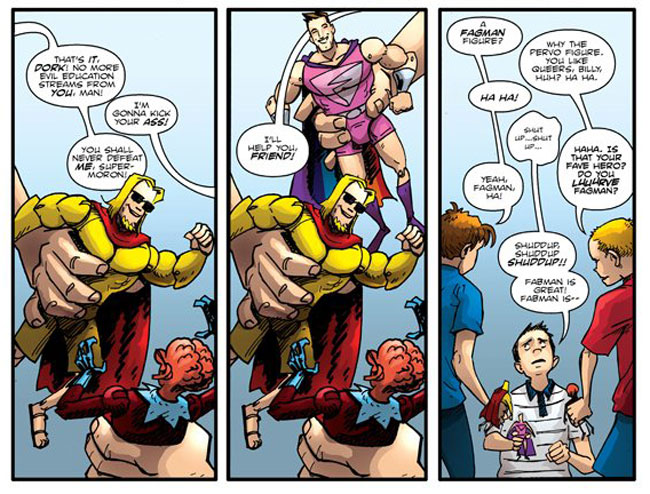 It’s startlingly close to recent (although not particularly novel) rhetoric surrounding the difference between a “normal” gay man and a faggot, an endorsement of hierarchy within our community I’ve been hearing since my first pride parade (damn those skimpy, rainbow-colored speedos) and throughout the fight for marriage rights, where the road to civil rights seemed fraught with the need to stamp out any social acceptability of non-monogamous or simply non-marital choices.

To make a distinction between a gay man and a faggot is, on one hand, assimilationist bullshit when uttered by a queer individual, and on the other, puerile from the mouth of a straight individual — a pathetic smokescreen attempt to legitimize deeply held homophobia in the guise of some faux agreement from inside queer culture. It is a ruse, and not a very convincing one, on either end of the spectrum.

Damaging is ostracizing the very image of an entire group of gay men who wear their sexuality on their sleeve, who have fought and died for the right to be open and honest about who they are — not simply who you imagine or want them to be.

Damaging is the sense that we went through the pain and struggle of coming out only be told by those who should embrace us that we are still not good enough, on top of having our stories policed by straight people as well.

This is our story, dammit. 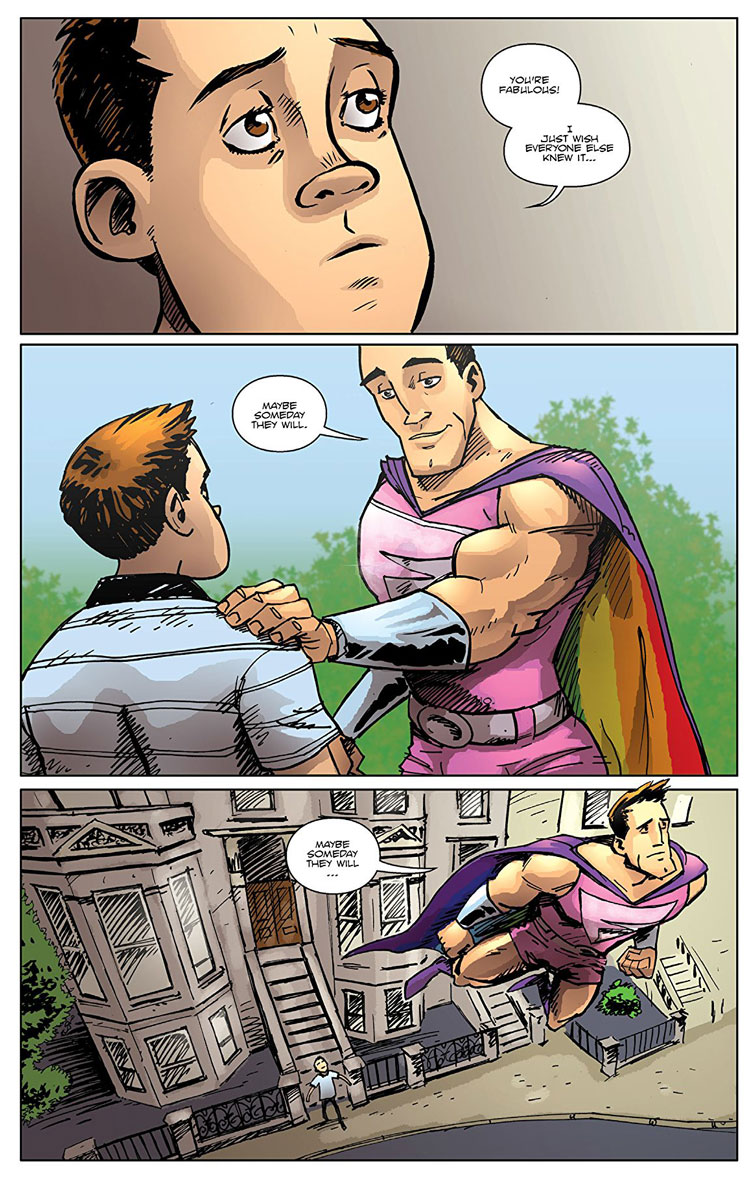