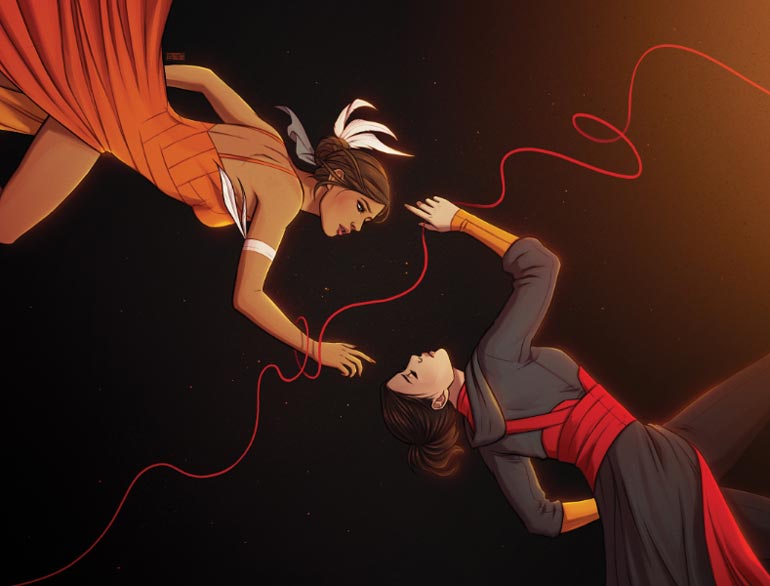 Queer comics and webcomics are booming these days, and very few places are seeing the excitement of this growth like Kickstarter. In fact, creators like Jennifer Dugan have recognized something powerful in going directly to the source with their narratives — reaching out directly to the readers looking for representation.

With her current (100% funded and growing) Kickstarter campaign, Dugan isn’t just bringing her vision into the world. She’s welcoming in queer women and non-binary artists to tell a very particular story in Circadia — a fantasy comic about a bisexual ballerina and a non-binary assassin falling in love while trying to save the world. She chats here with Comicosity about the project and what bi and non-binary fans especially can expect! 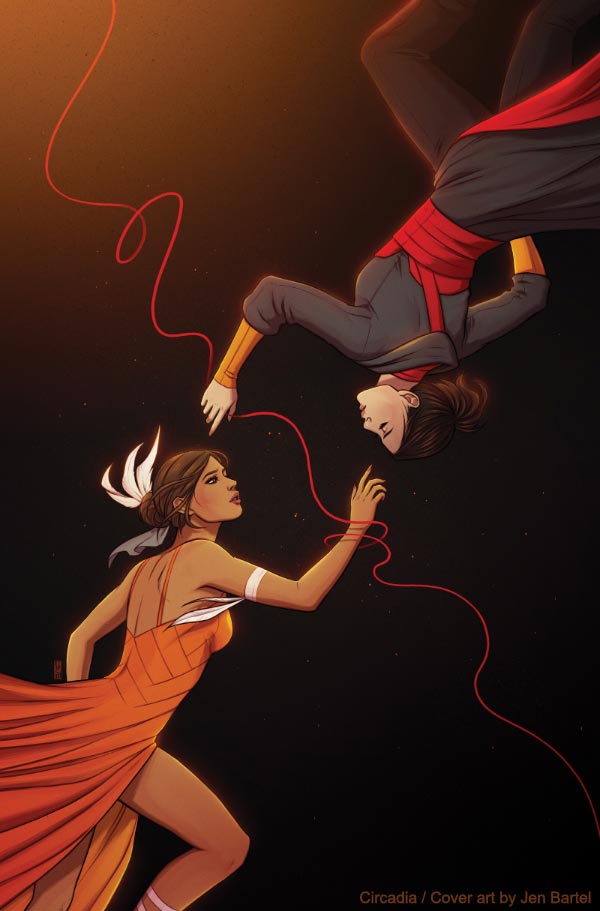 Matt Santori: Congrats on the funding so far on Circadia. Why did you want to bring this particular project to Kickstarter and why did you feel that was a good place to reach your target audience?

Kickstarter can be a great platform for getting new ideas out in the world. I’ve seen some amazing comics, especially within the queer community, that are finding a lot of success there.

We’re seeing some growing pains in the industry, where many people are starting to recognize a need for more diverse voices, but aren’t always going about it the right way. Kickstarter can be a great avenue to circumvent all that and directly support the projects that speak to them.

I know personally I get a lot of satisfaction in backing projects that interest me, so I was hopeful that people would feel that way about Circadia as well.

I also knew from the start that I would find myself in a bit of a gray zone in terms of traditional publishing with this project. It wasn’t technically an anthology since it tells one cohesive story across all five issues, but with so many artists rotating through, it also wasn’t what one would generally expect out of a comic either.

Knowing it would be tricky to place, I went into it with the mindset that I’d be going the indie route from the start; using a combination of self-funding and crowdsourcing to get it done. Kickstarter was particularly appealing because of the “all or nothing” funding model. While every little bit helps, there is a certain amount of funding I need to produce the book at the level of quality I’m striving for. While getting less than that would help get me closer, it wouldn’t get it delivered to my readers in the way I had intended.

So for me, I felt like Kickstarter’s funding method made the most sense.

MS: Your background includes a previous ongoing horror comic Gnaw, as well as a debut novel, Hot Dog Girl, slated for publication in 2019. Tell me a little about what you’re bringing forward from those projects into this new one?

JD: Hot Dog Girl and Gnaw are both very different from Circadia on the surface.

Hot Dog Girl is a contemporary Young Adult novel and Gnaw is an ongoing apocalyptic horror comic, but they all share themes of family, love, and especially the struggle to find one’s place in the world — whether that means working in a hot dog costume at a crumbling amusement park like in Hot Dog Girl or having to dance and fight your way through alternate realities like in Circadia.

Things like love, identity, family, and how it all ties together, are part of the human experience that really transcend genre and medium, and are something I explore in all of my work.

I try to push myself hard to improve with every project I work on, and I’m lucky to have a wonderful team of professionals and peers that have been helping me find the tools to do so. I consider everything I write an opportunity for growth, so Circadia is really the culmination of everything I have learned up to this point. 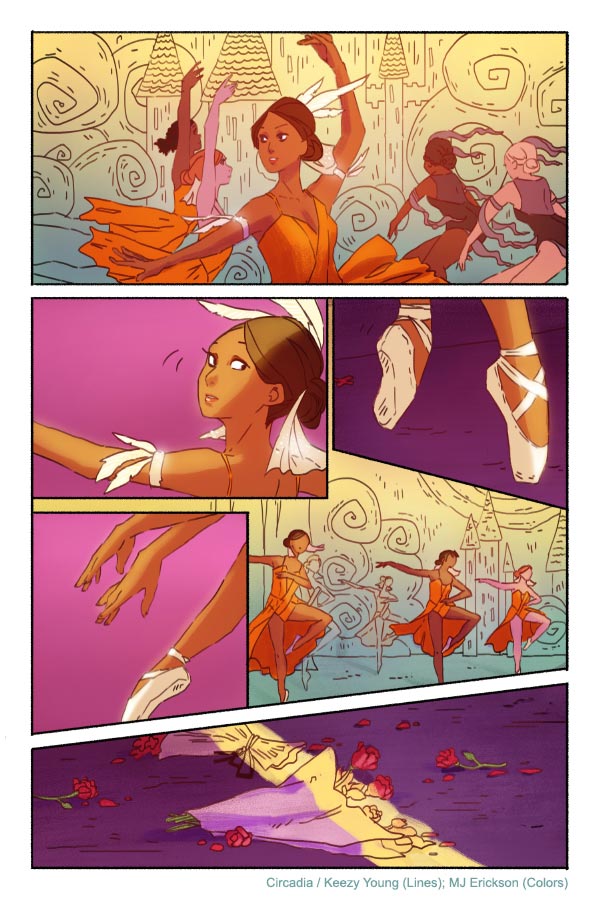 MS: The premise of Circadia is described as Stranger Things meets Black Swan. Can you expand on that?

JD: Circadia follows Zara, a young ballerina trying to hold onto her spot in a ballet company, and Aderes, a reckless assassin in the Circadian army, as they try to separate dreams from reality while battling monsters on both fronts.

The problem is, Zara is pretty sure Aderes and Circadia are both a dream, and Aderes is confident that the opposite is true, so there’s a real push and pull dynamic between them as they try to sort out which version of their lives is the real one before they both get destroyed.

While Circadia was already in process before Stranger Things became a cultural phenomenon, it really resonated with me as I went into revisions.

One of the things I really loved in Stranger Things was the mystery surrounding the Upside Down, and all the creepy crawlies lurking around in it. I loved watching the characters alternating between trying to get other people to believe what was happening and sometimes trying to convince themselves that things aren’t happening just to stay sane. There’s a lot of that going on in Circadia, especially as the worlds start to bleed together the way we see them do in Stranger Things.

Black Swan depicts this intense ballet experience where we’re sort of trapped with this unreliable narrator as her life is spiraling out of control, which is very similar to what Zara is dealing with. She’s trying to hold the scraps of her life and her ambition together while they’re coming apart at the seams. It’s a very delicate and terrifying place to be, and I felt that the film really captured that in a way that I hope to throughout the run of Circadia. 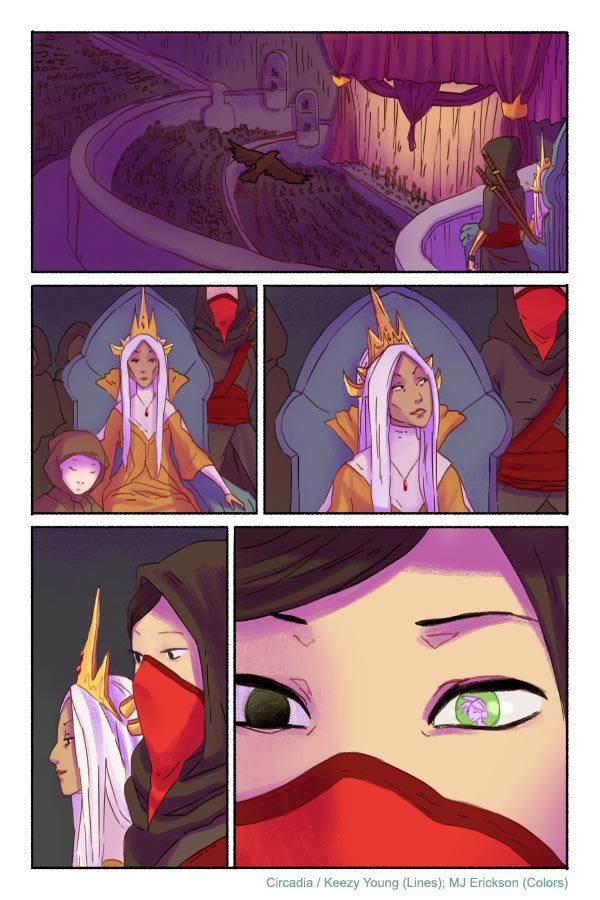 MS: You’re working with a huge slate of artists, rotating every issue. Can you share a little of your thought process on that structure and how each team reflects the narrative as it grows?

JD: When the opportunity presented itself to expand the roster of artists on Circadia, I was really excited by it. Comics are such a collaborative art form, I was thrilled by the idea of threading in as many artists as possible from the queer community. I’ve been met with a lot of support throughout the years, so I’m always looking for ways to pay it forward.

When I put the call out that I was looking for artists, the response was overwhelming. I’m still pinching myself over the caliber of people that have signed on to be a part of this. Throughout the issues, there is a blend of new and established artists, and everyone has just been so fantastic to work with.

In terms of how each artist reflects the narrative, I definitely put a lot of thought into which artist I wanted to place where.

For instance, my artist on issue #1, Keezy Young, has a more playful style that fits perfectly with the tone of their script, while my artist on issue #2, MJ Erickson, has this intense, urgent, vibe to her work that compliments the turn things take next.

Each artist was selected because I was confident their style would take my words to the next level, which is really every writer’s dream. 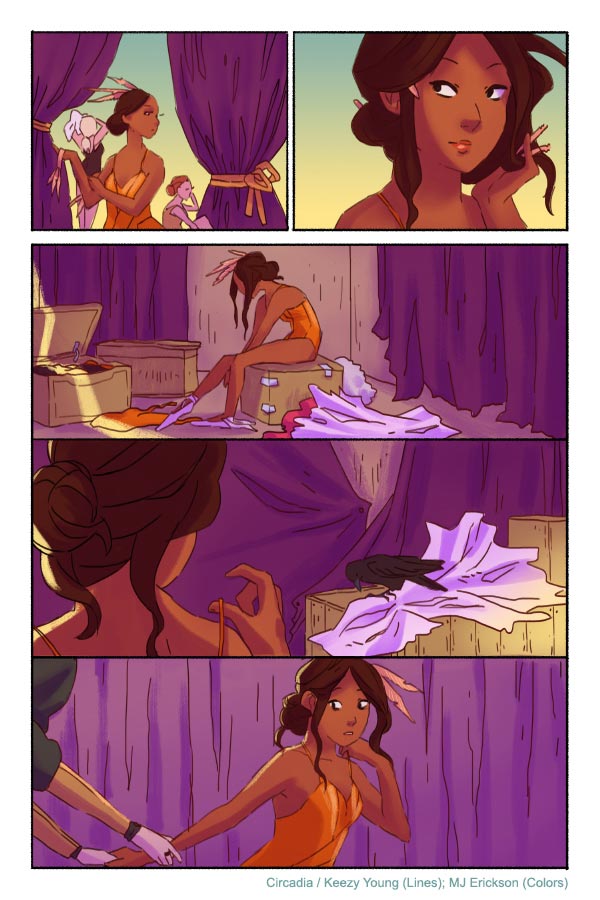 MS: It’s noteworthy that you’re working (exclusively?) with queer women and non-binary artists on the project. What kind of energy do you think that infuses into Circadia and why was that important to you?

I’m a big proponent of the #ownvoices movement in young adult literature, which is about getting diverse stories out in the world by writers who share those identities. It was something that I was specifically looking for when I sought out artists for this project.

In addition to telling a compelling story, I wanted it to be a celebration of sorts of all the great work coming out of the queer art community right now.

The artists that reached out to me about the project, whether they ultimately joined the team or not, were overjoyed about the idea of working with such a large, diverse group of women and non-binary creators.

That energy has definitely carried over into the work! 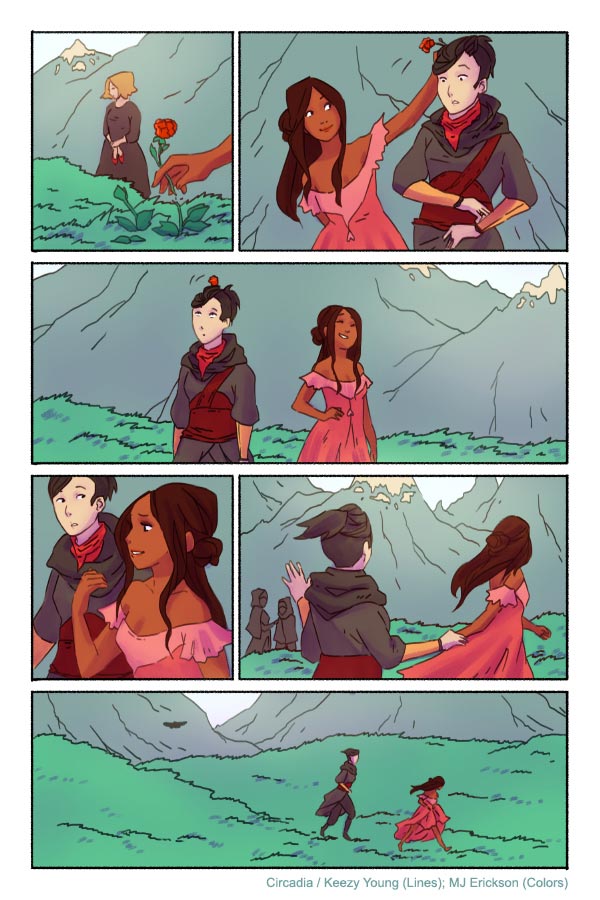 MS: What state is the project in overall and do you have any reward levels you think would be compelling to readers?

JD: Circadia #1 and all of the print rewards are completely finished and ready to be sent to the printers, so this is a very low risk project to back. In fact, issue #2 is nearly complete as well. The funds from this Kickstarter are just to pay for the print run for issue #1 and for the art on issue #3!

Five of the artists involved have created mini-print rewards in their own unique styles and we also have an exclusive print by Eisner-nominated artist Sara DuVall. Those are available starting at the $25 level.

Sara is also slated to do a mini-comic for us that will be sent free to every backer if we’re able to hit our stretch goal. As we close in on funding that’s quickly becoming more of a reality, so I’ll also be revealing a second stretch goal reward from Eli Baumgartner when the time comes.

I’m also offering limited spots for people to have themselves drawn as dancers in Zara’s ballet company. These are small background roles, but will reoccur throughout the issues whenever Zara is in the studio. This level includes an advance pdf of issue #2, which will be delivered at the same time as issue #1 — months before it’s official release.

JD: This is the story of two queer characters unapologetically living their lives, falling in love, and taking on the evils of the world, which is definitely the type of narrative I think we could use more of.

Ultimately, the stories I’m writing today are the stories I needed when I was growing up. I’ve gotten so many messages already across social media — particularly from teenagers — saying that this is the first time they are seeing themselves in a story as a love interest or a hero and how much that means to them. Being able to put that out into the world, even on this small level, is so important to me.

I hope that by releasing stories like Circadia and Hot Dog Girl, it helps in some small way to give other artists the opportunity to keep telling these stories, while also giving people the chance to see themselves represented in a way that maybe hasn’t been so readily available in the past.

Check out and contribute to the Circadia Kickstarter now before it’s too late!