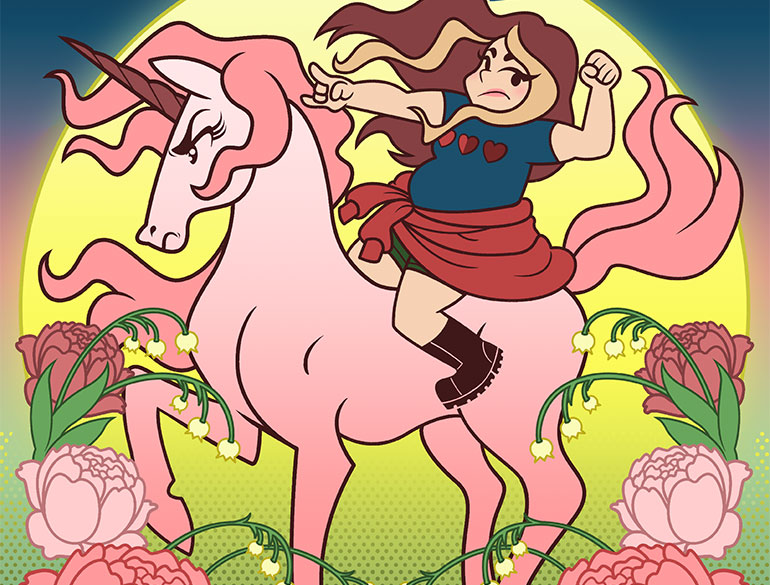 The last few weeks, Comicosity has been featuring a number of new Queer Visibility interviews focusing on #ownvoices in the LGBTA community, with chats with creators focused on non-binary, queer, and bisexual representations.

Today, we’re talking with writer Katie Schenkel and editor JD Boucher about today’s issue of Moonlighters — a book already featuring bisexual, gay, and lesbian characters — about the revelation of character Sue’s asexuality. The two talk with Comicosity about how an ace character was at the center of the original pitch, how the writer and artist handled the queer reveal, and what’s next for the crew as a whole. 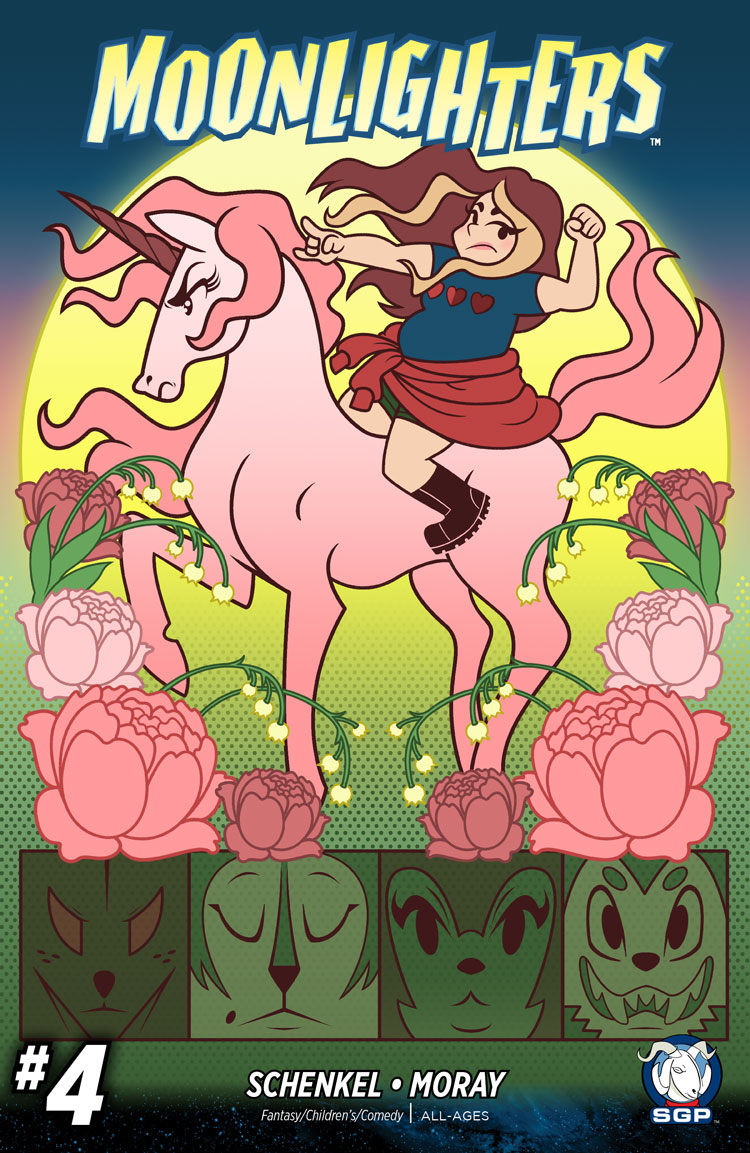 Matt Santori: Since I have you both here, can you tell me how this project developed out of Space Goat and what was envisioned for Moonlighters at the start?

JD Boucher: We were starting to build out our Backpack Editions line, a concept we had in mind of small, easy-to-carry books that would be great for kids and libraries — Millennial-friendly as my boss would put it. On top of that, we wanted to get some new titles in there, beyond Mage, Inc. and Big Game Hunters. We wanted some new ideas!

We started pitching with the roughest of ideas in the office, and I was like, “Broke werewolves! Who go to college! And do odd jobs to pay the rent! They’re the MOONLIGHTERS!” [laughs]

But I had seen all of Katie’s writing and I knew she was the one to bring on board, so I reached out to her. She had a great pitch off the basic skeleton we gave her — just a few names and concepts. We just told her we wanted a beautiful slice of life — characters of color, queer characters, and at least one ace character. That’s all we gave Katie and Cal [Moray] and they just blew it out of the water. It was fantastic!

Katie Schenkel: I just realized it’s been about a year since I got JD’s email about the project! I was nervous pitching at first because it was a very new concept. But when I got the very basic pitch request along with a very of the things they wanted — when I saw it was not only an LGBT cast, but also specifically asking for at least one ace character — I immediately thought, “This is the kind of company I want to work with. And these are the kind of projects I want to do.”

It made me really enthusiastic, going into it knowing Space Goat was looking for the kind of story I want to write. I kept thinking, “I REALLY want this gig now!” [laughs] 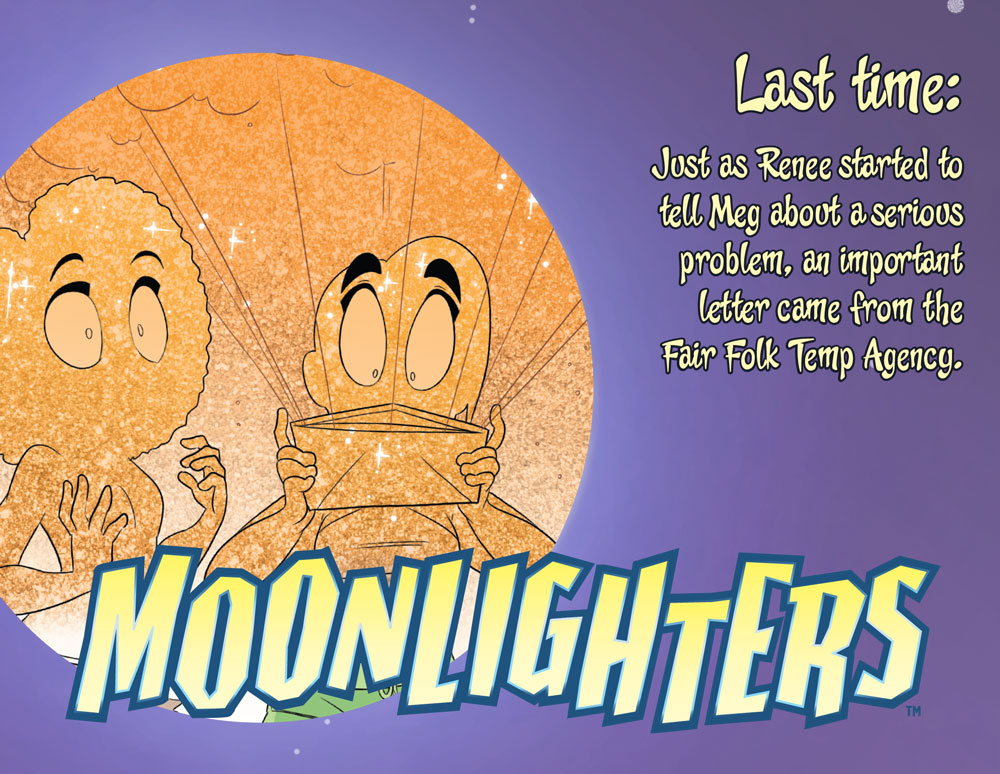 MS: So, issue #4, which hit Comixology this morning, reveals Sue to be asexual. And it’s a representation we haven’t seen very much in comics yet. Talk to me a little about the importance of that in relation to the hole you may have seen in the comics market for asexual characters.

KS: As a bisexual woman, I often empathize with asexual people, because we’re both groups that don’t often get represented — or get really poorly represented — especially in comics. One of the ways JD had found me as writer was because I had written about the ace representation in Jughead. I thought it was so lacking in so many comics, and it was great to see it handled so well by Chip Zdarsky and Erica Henderson.

One of the things I wanted to do immediately with Sue was make her a really fun character. I really wanted someone who was marginalized in different ways, because most of the time, when we do see an ace character, they’re usually white. It was important to me to have a Mexican-American, plus-sized woman, who is also ace. And in issue #4, she gets some moments to shine and be, in her own words, a bad ass. I was really over the moon to be able to bring that into the world.

JDB: I am an ace man, myself. And of all my friends in the comic book club where I live — half are ace and half are bi. We all just love comic books! [laughs]

There’s such a lack of representation in general, on TV, movies, anywhere. I’m just glad we’ve been able to make it happen in comics, because it helps make it more acceptable. I can only think of four other ace comic characters — Jughead, Monkey D. Luffy from One Piece, Tremor from The Movement, and Judge Dredd (although he’s canonically ace, it’s not really talked about).

I just want to see more and more representations of all queer identities. There isn’t an ace stereotype yet, but I hope we can get enough representation so we don’t build one. 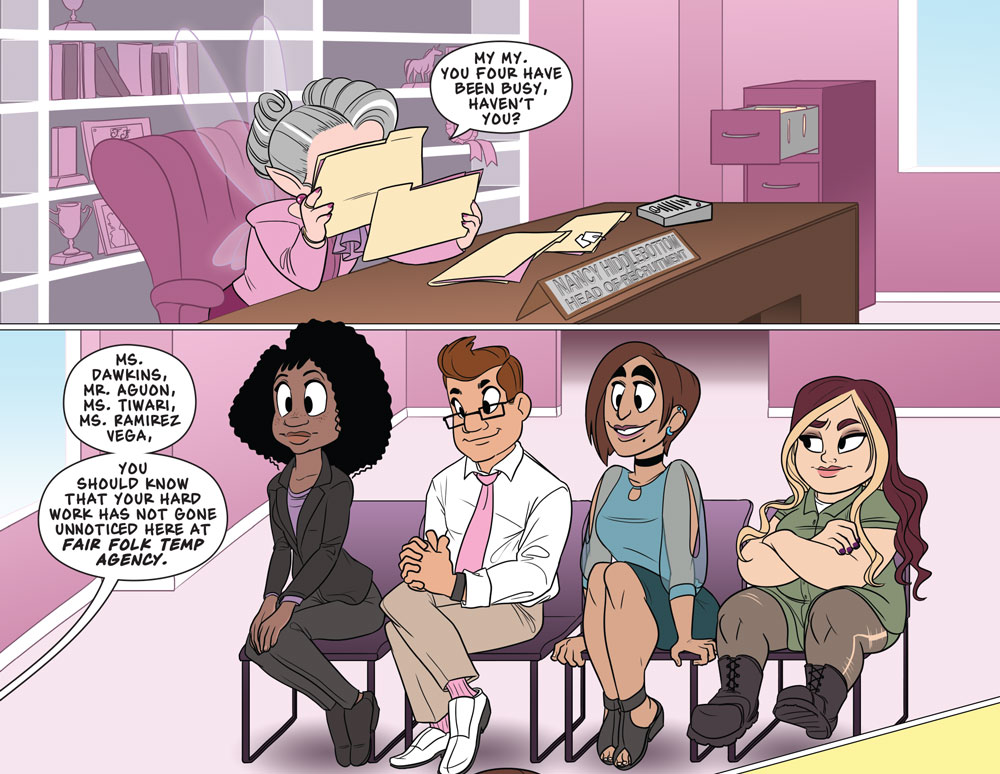 KS: It really meant a lot to me, because we’re aiming this at younger readers. I think we tried to really highlight their representation on the page, and it doesn’t escape me that for some of the younger readers of Moonlighters, this might be the first time they hear about the word “ace” or know about the representation.

I took it very seriously, because it could be the first time a reader sees these kinds of marginalizations, or the first time they’re seeing themselves on the page. I wanted to do right by ace readers.

JDB: Katie and Cal did a really good job of not making it “A Very Special Issue,” you know? Because that’s something I see a lot in comics. There may be a marginalized character, but it’s not them having adventures or doing cool stuff. It’s more like, “Hey kids, did you know…”

This issue is really just a great, fun adventure that I would have loved as a kid.

MS: That’s something I spoke to writer Andrew Wheeler about recently: how do you handle the big queer reveal? You handled it sort of offhandedly revealed with Felipe and Renee.

With Sue in Moonlighters, you actually made her asexuality critical to moving the plot forward.

KS: With Sue, it was tricky. I get why some people can get nervous writing ace characters, because how do you make it explicit on the page? There isn’t always a romance to say they’re not interested in — and that’s a trope in and of itself that’s an issue. 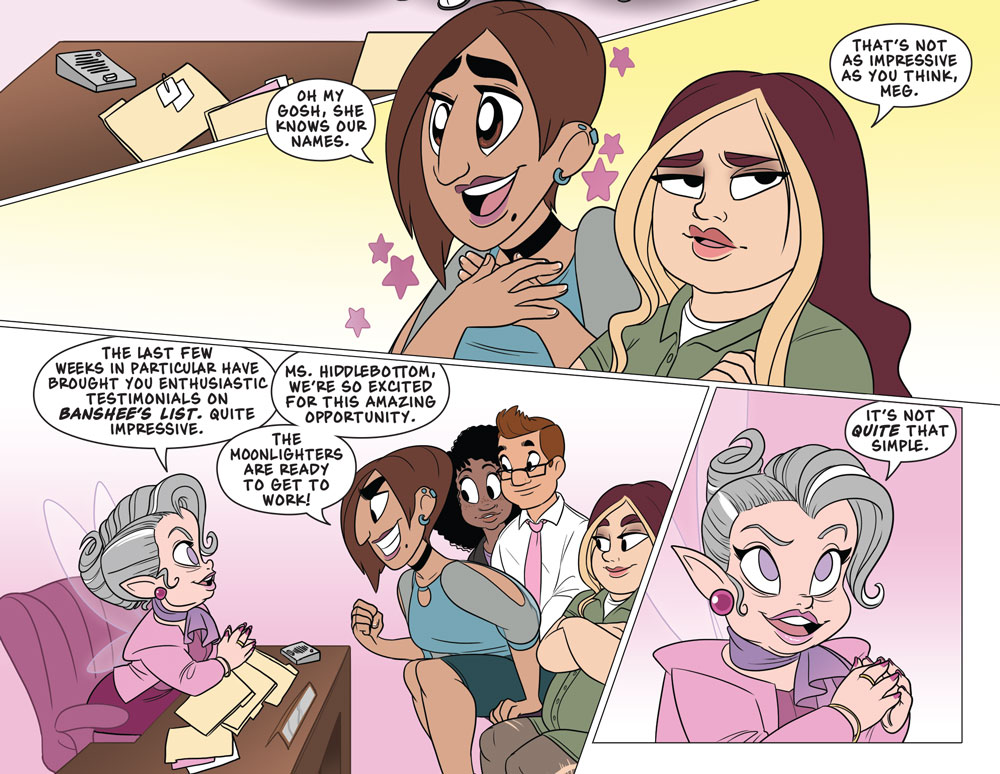 With Felipe in issue #3, it was someone having a minor crisis, and him relaying his experience. It wasn’t someone having a crisis of queer identity; it was just him empathizing with someone going through a big change. With Sue, we did make it a plot point, mostly trying to bring in these other magical elements. It was doing some world-building and deciding how different magical quantities work in our universe. Pulling in Sue and some of her skill set was part of that.

MS: It’s interesting to talk about world-building in this case, because Moonlighters seems to operate in a world much like DC Comics Bombshells, where queerness is the presumed default — which also is rare in comics. Most of the characters are queer, even the support characters, and the ones that aren’t are simply unrevealed.

JDB: Well, for me, I really like werewolves. One thing Katie just nailed is that we wanted to do a fun werewolf story because 90% of werewolf fiction is about the alpha male in the pack. It’s a very masculine and heteronormative genre. I’m really glad we were able to offer an alternative with this comic.

KS: There’s definitely a lot of queer people who really enjoy telling stories about monsters, and that’s becoming more prevalent with webcomics and other ways to get comics out there. I know that Kel MacDonald just did a successful Kickstarter for Can I Pet Your Werewolf? that I’m super excited to be getting. It’s very female focused takes on werewolves, which we don’t get to see very often. Also, just last month, artist Lucie Ebrey was doing a werewolf-themed Inktober, with a lot of them queer.

I also think there’s a lot to be said for taking monsters that most people have seen as the bad guys and turning that on its head, making them empathetic. It’s not a new idea in queer stories. I’m glad to be adding my little part to that. 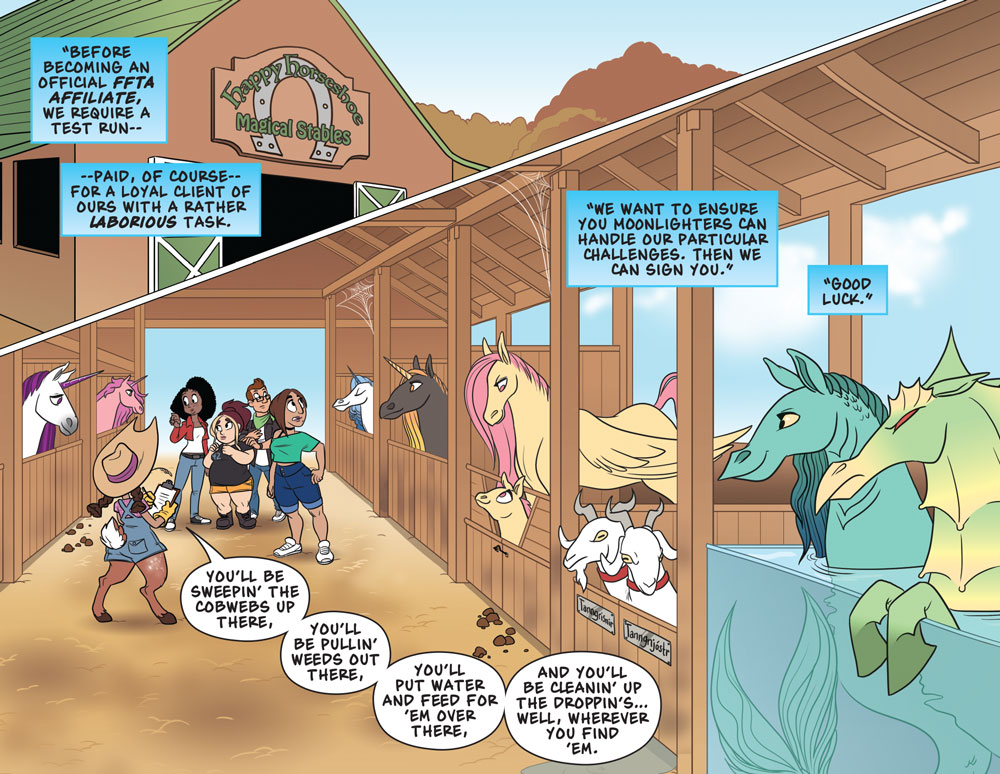 MS: Any final thoughts or special teases for the upcoming last two issues?

KS: Things are going to get real.

Also, there’s an amazing cover coming from artist DJ Kirkland that you’re going to see soon. He’s the guy doing Black Mage for Oni Press coming up. I can’t wait for you all to see it!

KS: You know, issue #3 and #4 were the very fun issues, where they get to have funny adventures. Issues #5 and #6 are where things get a little more serious. What I’m really hoping is that the whole arc reads as really satisfying. Especially for Sue, I’ve actually been surprised by her character growth in the series, which is something I wasn’t expecting.

Check out the latest issue of Moonlighters at Comixology now!