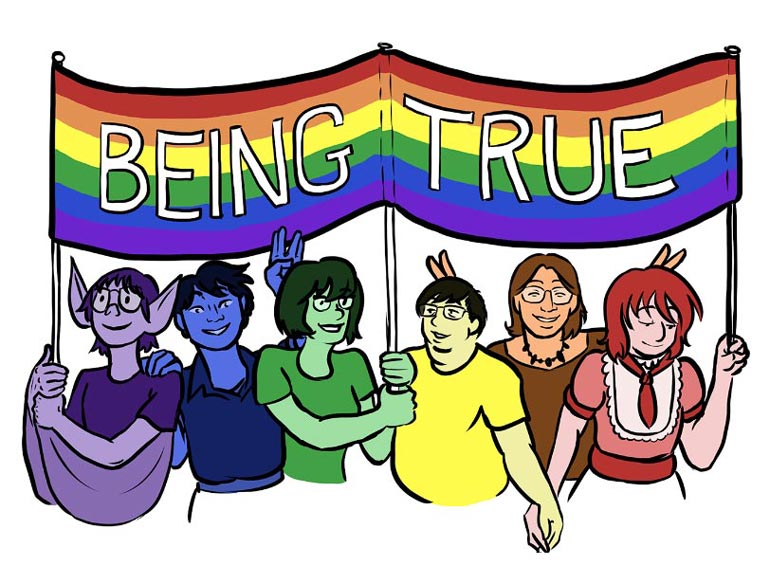 The Boston Comics Roundtable is a group of LGBTQ comic lovers that have come together to release an uplifting celebration of LGBTQ life and identity — Being True, an anthology blending fiction and nonfiction, from fantasy and superhero comics to real and touching stories from the artists’ lives — stories that have happy endings.

A number of the editors, writers, artists, and contributors came together to share their thoughts on this very special collection. The Kickstarter campaign is funded, but there are still 13 days to add your pledge and be a part of this unique phenomenon for the LGBTQ community. 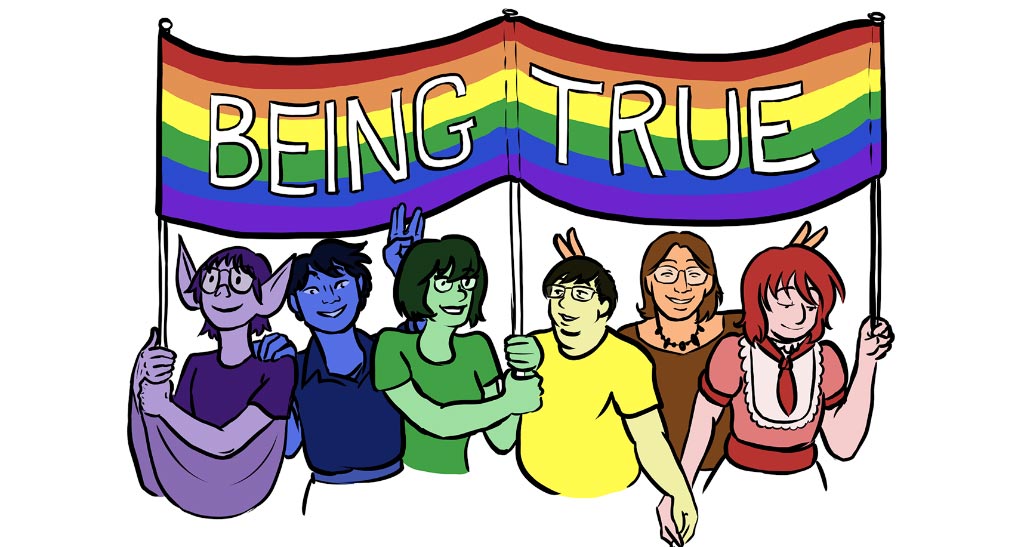 Matt Santori: Hey Being True team! If you would, please introduce yourself to our readers.

Steph Glass: Hi! I’m a Boston-native lesbian and have been pretty heavily involved in the LGBTQ community since I elected myself president of my high school Gay-Straight Alliance by a one-vote landslide.

I do a lot of the media outreach and event-planning type stuff for Being True, as well as writing and drawing my own contribution.

Renie Jesanis: I am a Boston-based water/wastewater engineer by day and a queer trans-woman comic writer, artist, and editor by night.

Kyri Lorenz: Hey! I’m a disabled queer transmasculine person from Northern Colorado and transplant in the Boston area for three years now. Currently I’m surviving on art commissions and freelance. Take a peek at my stuff on my website: kyrianne.com.

Patricia Loupee: HI! I’m a bi-romantic, demi-sexual and currently gender questioning comic creator from Brazil. In our team, I am the writer. Noah Graham takes over the pencils and an awesome trio of editors — Logan Schell, Tee LaFrance Todd and James L. Sarandis — completes the roll call.

Beth Barnett: Hello! I live in Cambridge, MA, with my husband and our fantastic comics library. As a cartoonist, I make autobiographical comics about mental health, medicine, music, and relationships; and historical comics often with a medical or military bent. When I’m not making comics, I’m probably weightlifting, listening to David Bowie, or cooking.

My favorite dinosaur is the compsognathus.

Maura McGonagle: And I’m an illustrator currently based in Boston.  I’m best known for my narrative works, but also make theological prints and work with occult themes. 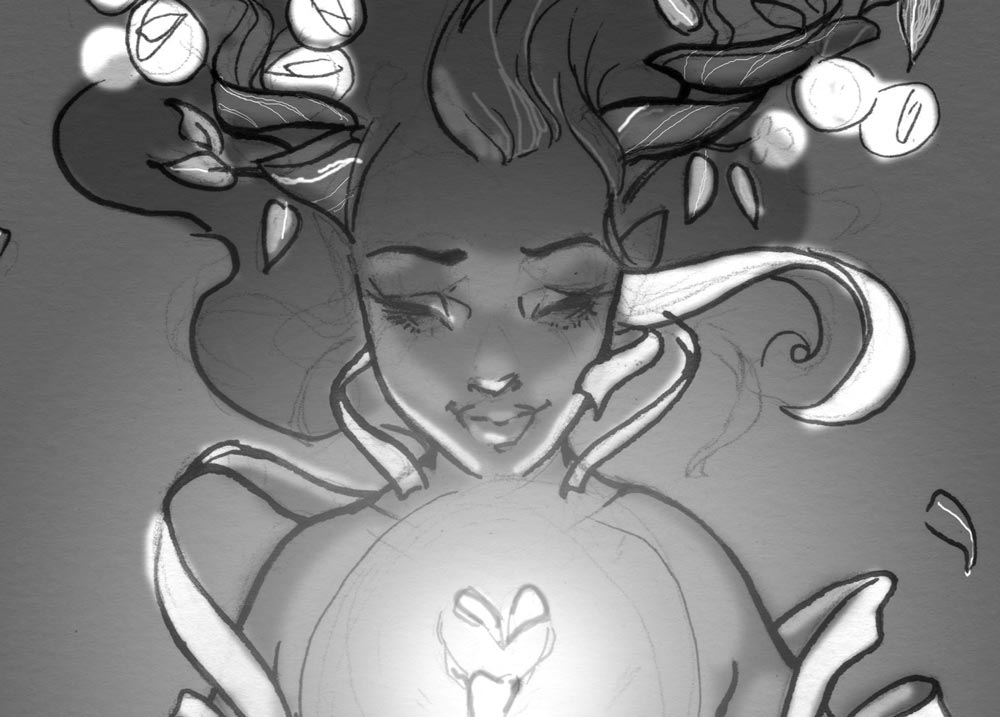 MS: What brought each of you to this anthology?

SG: Even in current comics, there’s a pretty serious dearth of non-tragic gay stories. Personally, I know I would rather read a lesbian romance than a heterosexual one (and I’m sure many straight people feel the opposite way!).

So, when Renie brought up the idea of making our own LGBTQ comics anthology, I totally jumped at the chance.

RJ: The idea for this anthology came to me after I went to FlameCon, the all-LGBTQ comics convention, last year and felt that the Boston Comics Roundtable really should do an all LGBTQ Anthology, as many of our members happen to identify as such.

When we put out the call for submissions, not only were we pleasantly surprised to receive pitches from across the globe, more or less all of the pitches were positive and uplifting stories about queer and trans identity ranging from slice of life all the way to fantasy and sci-fi.

KL: My involvement in the anthology happened almost as soon as it was conceptualized, because I was “in the room where it happened” so to speak. Ha ha.

Renie suggested it at a BCR meeting and everyone encouraged her to organize it. I immediately offered myself as the book designer because I have almost ten years of experience with InDesign and I also designed a previous BCR anthology (Spellbound Volume II).

Initially I had just intended to stay strictly designer, but Renie is a force of inspiration and this is a project idea that’s near and dear to my heart. So I’ve been pretty fully consumed.

PL: My story was actually more than halfway to being completed when I first took notice of the anthology through an advertisement in a forum. The idea of a positive portrayal of LGBTQ+ characters felt like a perfect fit for it. It just had to go through some minor adjustments to jive with the anthology theme a little better.

BB: The anthology felt like a safe place to explore my identity. I knew my piece would be incredibly personal and I wanted it in a good home, with editors who would respect my work — and understand that there is no right (or wrong) way to be queer.

MM: I was attracted to this anthology for a lot of reasons.  I’m always looking for more ways to support our local scene, especially in a city where the arts aren’t always appreciated in ways they should be.

It’s also rare to get a chance to fully express yourself, so how could I not be interested? It really was just such an amazing opportunity. I’m touched to be a part of the anthology. 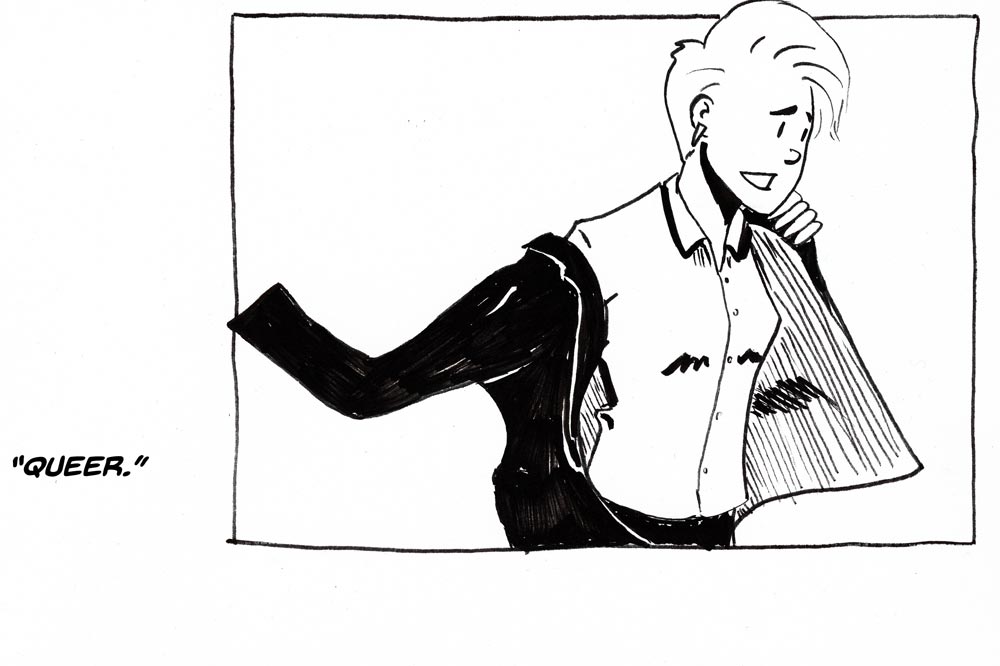 MS: What style of story are you telling in this volume and why is that meaningful to you?

SG: My story is, not to give away too much, about a superhero and an Ancient-Greece-style witch travelling together in interdimensional space. I will be totally astonished if I manage to fit it in four pages, I’ll tell you that.

When we all decided to make our own contributions to the anthology, I immediately knew I wanted to write the kind of 90s-Vertigo-weirdo story that got me back into comics as a teenager. And while I love Vertigo, it’s pretty uncommon to have female protags in those kinds of stories.

I’m happy to be able to fit wacky comic book sci-fi with lesbian leading ladies into a PG-13 book that younger lesbians and bi girls will be able to read and see themselves in.

KL: My story is using existing characters I have for a webcomic that’s on semi-hiatus, Bitchcraft, so I’m excited to get to play with them again. They’re sarcastic goth witches, but my story is actually super mundane and happens at a bar (which is not a normal bar, but any strange and magical features to it are merely background noise).

The joke is pulled out into four pages, which is an adjustment from my usual format for this comic, being one-pagers with clear jokes outlined and the final panel being the punchline. It’ll give me an opportunity to really focus in on each main character and draw more background, though, so I’m pumped to see where it goes and how it might change Bitchcraft itself.

PL: We’re telling a super-hero story called “Facades.” Set in the 1950s, the short tells a story about mourning, love, prejudice, and how unexpected kindness and respect can change someone’s life.

The story is very dear to my heart because I love superheroes, and I love using them — since they’re supposed to be the examples we look up to — as a means to tell pertinent stories on a level that’s very personal to me. They are basically my way of coping with the world.

BB: My piece, “Suits Me,” explores my search for a label that fits by using off-the-rack suits as a metaphor for my identity as a queer person. For now, I use “queer” to describe myself. It fits pretty well, but someday I’ll find a term that is tailored for me.

I enjoy the meditative, insightful process of writing memoir comics. I inevitably come away from a story having learned something about myself. Over the course of creating this comic, I had many moments of clarity, both about myself and how the narrative should progress. These made “Suits Me” more personal, more relatable, and stronger over all.

MM: A good story is one grounded in personal truths, so all my works include truth at the core.  Even though my story has fantastical elements, it’s really about facing your inner fears and turning them into a source of strength. 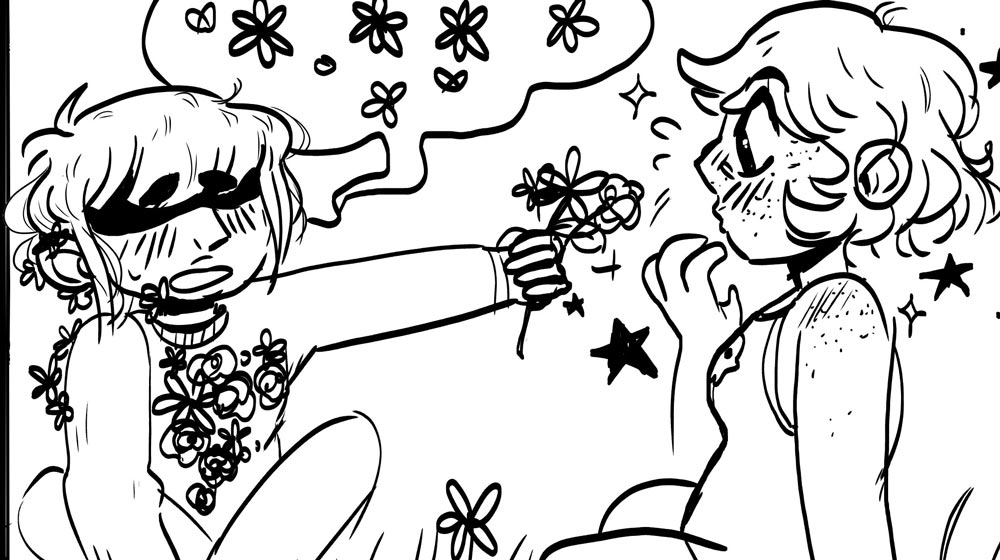 MS: What do you think Being True is adding to the overall queer narrative that is missing and NECESSARY?

SG: I mean, there’s a lot of pretty uncommon stuff going on here: a shot at being published and paid for relatively unknown creators. An anthology spanning genres instead of being restricted to one or two. LGBTQ rep written by actual LGBTQ people.

But I think the most valuable thing we’re adding to the current dialogue is stories without a tragic ending. For lots of reasons, including flat-out censorship, there’s a tradition in literature that same-sex couples and transgender people end up dying or going to jail or being cosmically punished in some other way at the end of the book.

And while that’s no longer explicitly encoded, the trope is absolutely still around. That kind of stuff can be incredibly depressing and discouraging as a young kid, so we want to be able to counteract that.

RJ: There is such a lack of good representation in media about queer people, so it’s not a surprise that all of our contributors wanted to change the narrative.

Additionally, there is a large gap in pay for queer creators across the board, making it especially hard for even seasoned veterans, let alone newcomers looking to break into the industry. This anthology provides an opportunity for these creators to get what they honestly deserve everywhere.

KL: Being True is important because it doesn’t divorce the creator from their work, and it offers so many different stories of queer expression and experience for young teenagers and adults alike to relate to.

I feel like a lot of YA LGBTQ+ material follows the same basic storyline (kid coming to terms with their queerness, the gay coming of age) that really only applies to a certain subset of us. I didn’t figure out I was queer until I was 16, and then didn’t figure out I was trans until I was in my early twenties, so having access to these kinds of stories may have really helped me find myself sooner.

I hope we can do that for our younger readers, and maybe even some of the adult readers as well.

PL: Being True is one more way of strengthening the good trend of portraying LGBTQ+ people under a positive light, and going through positive things — instead of the usual narrative of suffering and shame and managing to be happy despite being gay. Having a right to happiness because they are people.

Kids, either straight or queer, need to see good examples of LGBTQ+ world in fiction.

BB: We’re focused on creating and telling positive queer stories for a middle school audience. There’s no ‘Bury Your Gays’ trope, or tragic ending. The characters are people who discover and love themselves.

These are the stories I wish I heard when I was a teenager. It’s okay to be different, to embrace who you are, and to find the joy in being you.

MM: This is a great question that might be too big for me to answer.

I guess Being True supplies more queer voices, which is always necessary, and more inclusion.  It’s such an important, but subtle, need that I think it goes overlooked.  Things don’t always have to be groundbreaking to be essential, and I hope this anthology can be a friend for people in a confusing place.

Check out the Kickstarter NOW!