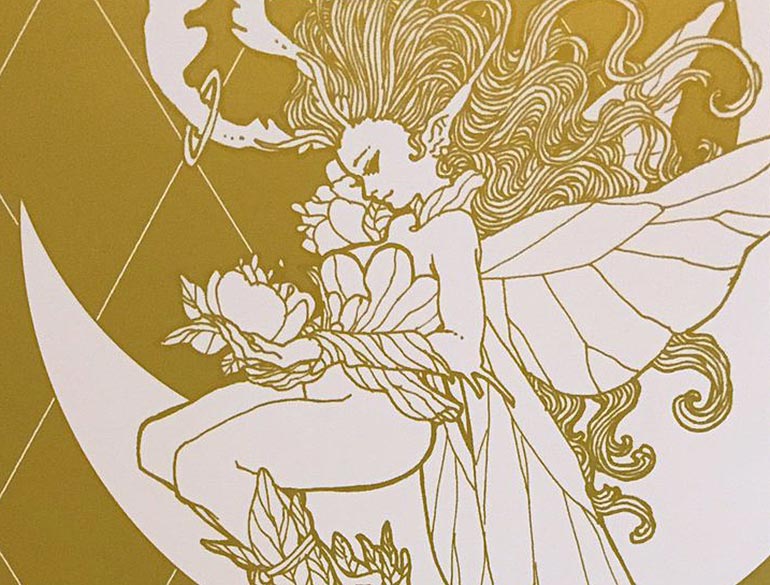 After getting to chat with Meredith McClaren about her upcoming graphic novel Super Fun Sexy Times recently, I was left with an itch to find more creators to discuss sex and queer themes in comics from a positive, personal perspective digging into how their queerness impacts their work.

Luckily, I was able to catch up with Trungles to discuss his adult coloring book Fauns and Fairies arriving next month from Oni Press’ Limerence imprint. What resulted is a conversation that goes beyond examining the thought behind Trungles’ intricate artwork to capture notions of queer aesthetics and their politics that never quite make it into mainstream comics discourse, yet another reason why he’s a cartoonist who demands close attention.

Véronique Emma Houxbois: Fauns & Fairies seems like one of those projects that once it emerges, it feels like the most obvious thing in the world you never thought to ask for. To me, the amount of space you leave open in your figures and precise inks really lend themselves to a coloring book format, but what inspired you to pursue this presentation instead of a more conventional series of pin ups?

They take a long time to make and hardly any time to consume, but I think graphic media uniquely lends itself to easy re-reading. I like to think people get a lot more out of images and the stories they tell if they find ways to spend more time with them. A coloring book is a perfect way to encourage someone to slow down and take a little time with an image. 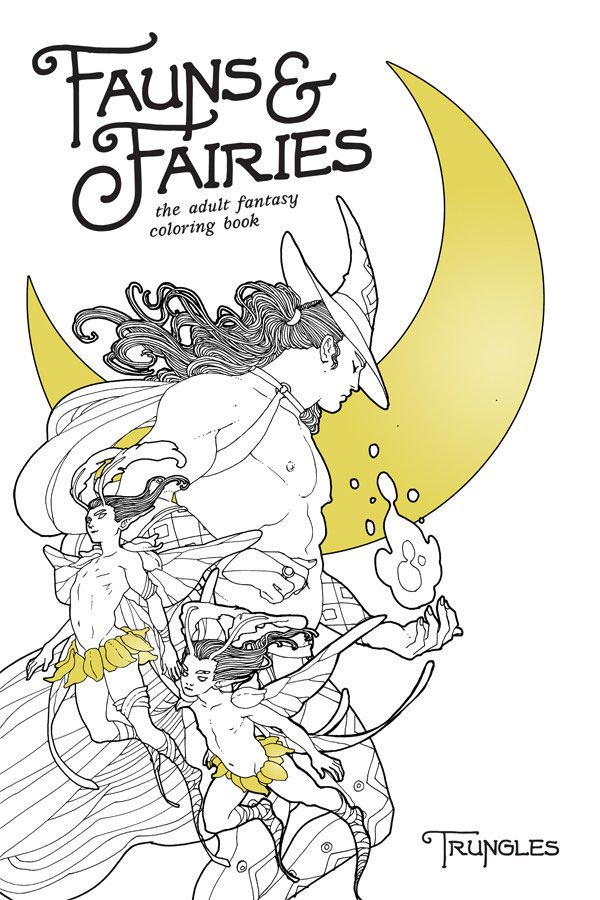 VEH: There’s a fascinating and ongoing dialogue about genitals throughout the book that I really wasn’t expecting to see. There’s a wonderful display of body diversity in general, but it seems to me like the way you step out of cisnormativity in very bold and upfront ways in some illustrations creates a head space in which the viewer can’t take for granted what genitals the figure might have in the cases where they aren’t visible.

Is that something you intended to cultivate? What role does the relationship between sex and gender play in creating a book like this?

Originally, I prepared for this project by spending time looking through a lot of gay pornographic cartoons, typically by and for cis gay men. It’s got a long and interesting history, and you get a lot of same-y muscle-bound men with distressingly large penises. That kind of Tom of Finland aesthetic becomes the working precedent for so much contemporary gay erotica, and after a while I was really worn out on it. I tried to draw what I’d seen because I thought that’s what people were expecting from me — a cis gay man making erotic art will yield images of broad-shouldered, square-jawed men with engorged penises.

At a glance, the reader is supposed to know, “This is a sexy woman, and this is a sexy man,” because of those common visual cues that accentuate idealized physical characteristics of gender essentialist parodies of manhood and womanhood, and gay male erotica mostly conforms to that standard. I wanted to find a different precedent. 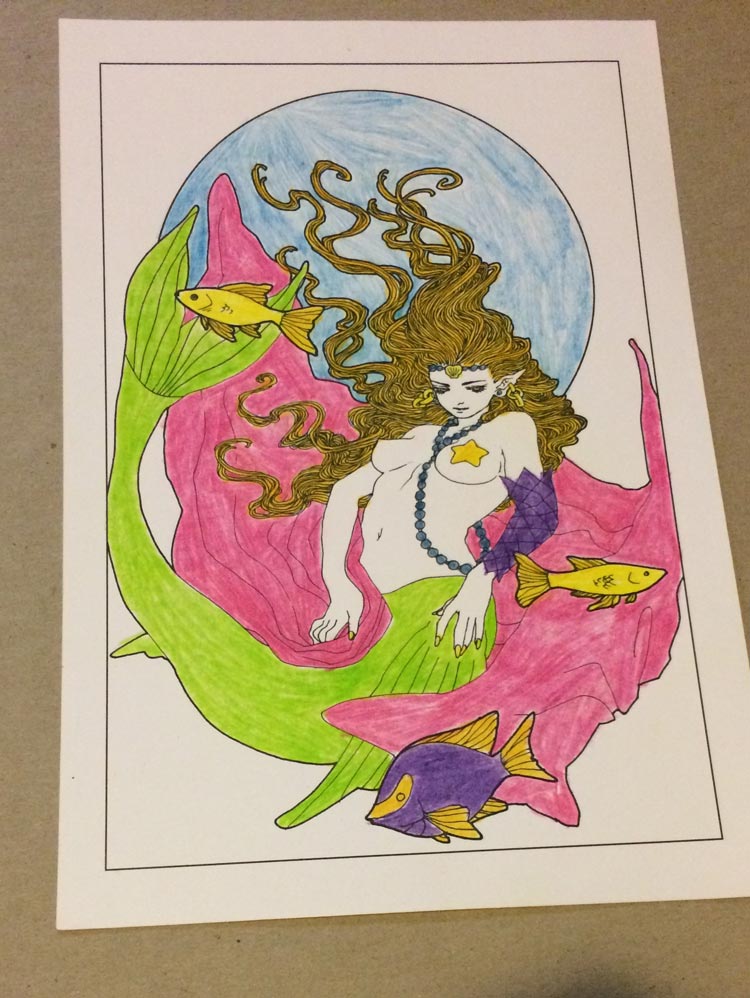 VEH: I’ve just been reading up on Touko Laaksonen’s (Tom of Finland) career recently for something else, which I guess isn’t much of a coincidence because his legacy is completely unavoidable in queer aesthetics in or out of comics. Given that kind of omnipresence his work has now, it was surreal to read about how his appropriation of outlaw biker culture was very radical at the time.

Any gay male representation that made it into the mainstream at the time was fixated on the kind of emasculated image you’d expect from a rigidly patriarchal era. It’s fascinating to see how what was once a radical body of work become the norm that necessitates disruption.

The fairy tale imagery and aesthetic you use to soften those literal and figurative hard edges are also prominent parts of your body of work in general. What is it about those elements that keeps you coming back to them?

T: That’s really cool! I didn’t know that about his work. I always wonder if reclaiming masculinity in response to conflating weakness with femininity is a necessary step. The idea of emasculating a thing within the popular imagination of a prevailing culture is a parallel conversation in Asian American circles, as well, so now I’m thinking about how that informs my relationship to femininity as a queer Asian American artist. It’s a lot!

As far as fairy tales go, they’re the first stories I encountered when I was a kid. I read fairy tales because I liked the pictures. As an adult, I love them because they subtly change place to place and from time to time. Grimm stories are great because they’re nonsense. They’re the ones that are often astonishing and cruel without resolution. 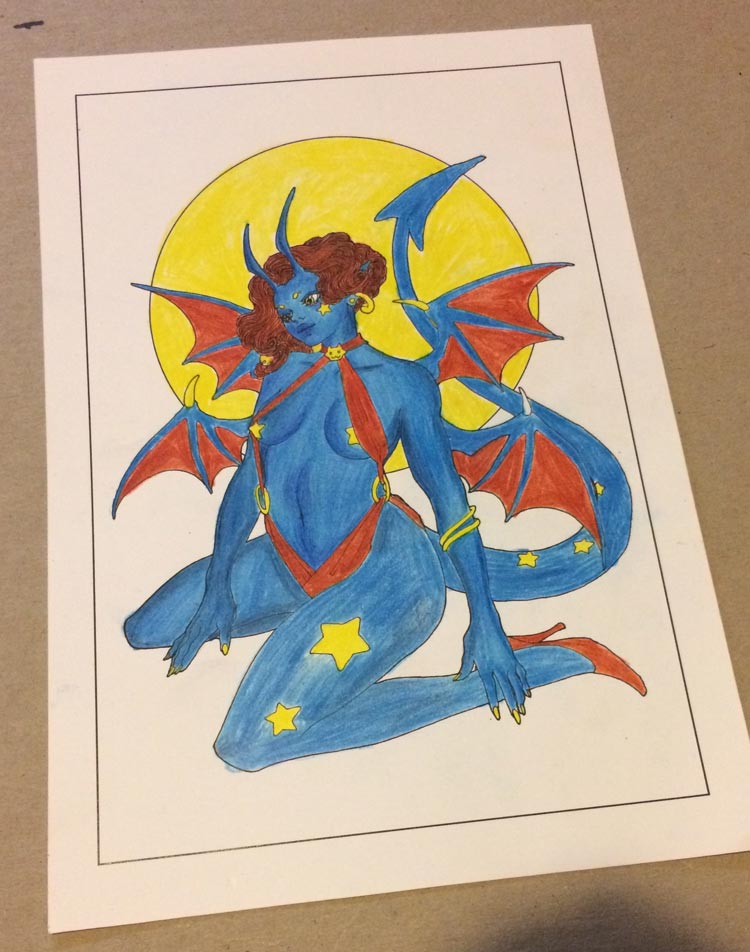 I really love Hans Christian Andersen’s stories because you can kind of read a lot of his stories as a makeshift queer language within the context of a very conservative environment. As a person who lives between languages and between cultures, that was special because Andersen’s being very creative about expressing personal struggles for which there wasn’t really a broadly communicable vocabulary at the time. It reminds me of having to construct the notion of queerness to my parents, for example. There wasn’t much in the way of language to describe queerness in Vietnamese, and so storytelling becomes a part of the process in coming out to them.

I think, ultimately, fairy tales feel so far away that I never felt bad for being unable to relate to them, which sounds really strange. I’m a first-gen immigrant, so there was a lot of pressure to assimilate and relate to all these things for which my parents had no context and couldn’t guide me through. Fairy tales were ridiculous and bore no expectations of me.

VEH: That’s really beautiful, using them to finding a way to navigate that liminal space. I couldn’t really unlock fairy tales and relate to them on a level like that until I found Angela Carter’s The Bloody Chamber a couple years ago, but I definitely get the power of reshaping those narratives and the imagery associated with them.

Another thing that’s really entranced me about your work since I first encountered it is how kinetic it always is. The first few drawings of yours that left a big impression on me were fan art of magical girls, Cardcaptor Sakura, Sailor Moon, stuff like that, and it always seemed so fitting and in character to have swirling hair and billowing skirts, but there’s always some kind of movement in your work.

Even figures at rest in Fauns and Faeries have hair that seems to be floating in a gentle breeze or will have similarly suspended clothing. Is there a specific origin or intent behind that habit?

T: Thank you! I super appreciate that you’ve noted that my drawings have a lot of movement in them. A lot of folks read the images as pretty static, which is fair. My central figures tend to be pretty anchored, but I’m pretty meticulous about showing fluid movement washing over an otherwise relatively static figure.

I think it’s a technical necessity that informs that aesthetic. Most artists and cartoonists are taught to vary their line quality to help show weight or space. I didn’t go to art school, so I never quite took to that. My preferred method of conveying gravity, weight, and movement is by dialing up the expressiveness of loose fabric and hair. It lends itself to a sense of magic, that notion of an invisible force moving about you when you’re still. 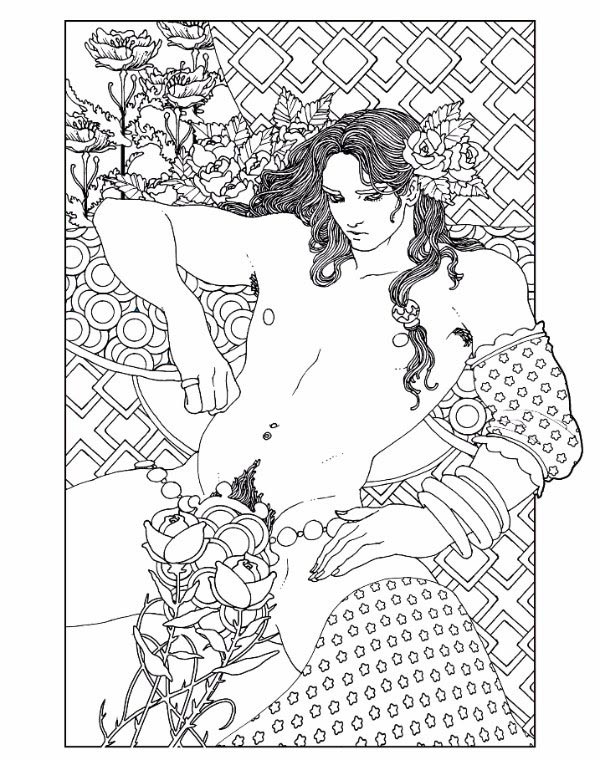 VEH: The different ways that artists in and around comics convey those things is one of my favourite things. I delved into it in a bit more depth talking about Elizabeth Beals’ work and how she seems to create the illusion of her figures being suspended by employing a fairly similar dynamic. It’s rad.

T: I love Elizabeth’s work! She definitely does a pretty fantastic job conveying just that.

VEH: What’s next for you? Do you see yourself expanding on the themes and ideas in Fauns and Fairies or moving in a completely new direction?

VEH: Vampire Buddy! I love the energy and 80s influence in it. Do you have any closing thoughts to impart?