I remember reading Jughead #10 and one page into the issue, tweeting this:

It hurts how much I relate to Jughead sometimes. It’s too real #thatacespectrumlife pic.twitter.com/KCwr5KKXPb

I have a little open secret. It’s weird for me to say “secret”, because it’s not exactly like I’ve been trying to hide it — but it’s something that not many people know about me. It has rarely come up in conversation since I learned about what it was and that I am one of them.

I am a person on the Ace spectrum. Demisexual panromantic, to be exact. If you don’t understand those two words, let me start your exciting adventure into the world of sexual and romantic orientations through links here and here.

I am within a range of asexuality, and as such, I usually feel a superficial — what other people have taught me is the correct answer — understanding towards how characters react to romantic situations. I understand the components of romantic scenes well. Hell, if you ask my friends, I have a weird knack of subconsciously adding thirstiness into works I’ve written. But as I read this latest issue of Jughead, it struck me how hurtfully close his date has been to other “dates” I’ve been on, and it’s painful to see how the reality of the situation is to the other person on the date. 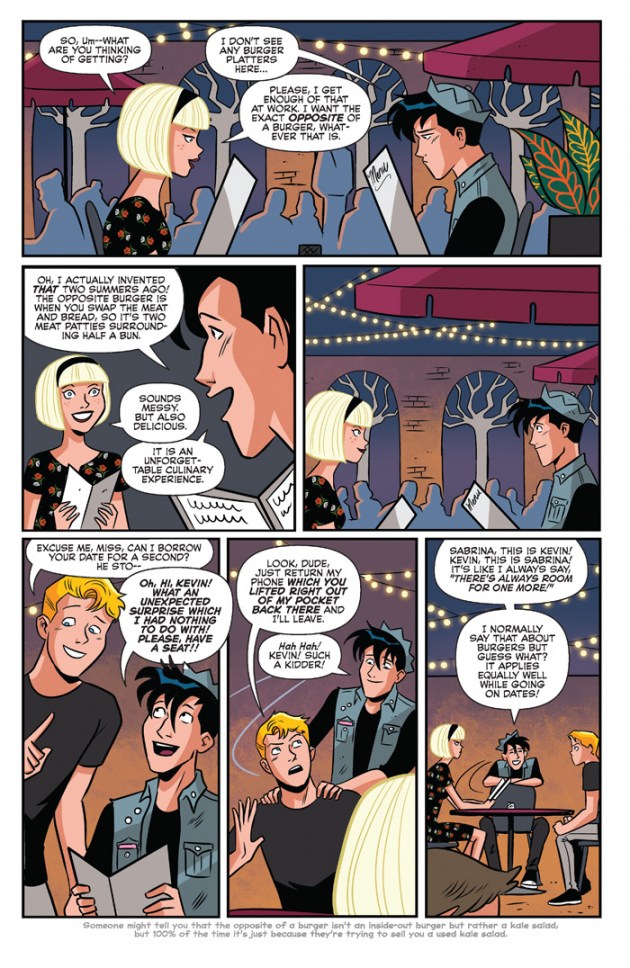 Jughead, seemingly as a joke, says at one point “Nobody cares about my expectations. Nobody cared that on a primal level I just wanted to hang out with a giant burger”. It’s immediately obvious to me that something I’ve felt — and Jughead feels — is definitely a punch line to everyone else. Something that sounds very goofy to the average reader feels like a sad clown line to me. It feels like everyone assumes you have to be looking for someone you’re sexually attracted to, not just romantically interested in.

Even Kevin, someone who is part of the LGBTQA+ community, dismisses Jughead’s problems as normal heteronormative things. And it stuns me that I’ve done that to myself many times. That I sometimes internalize Kevin’s thoughts here. That I dismiss feelings that I’ve had that are similar to Jughead, because I have a sense that people wouldn’t care.

And that’s what this issue established thoroughly for me. Similar to Jughead, I’ve never been a part of a LGBTQA+ club or community, partially because I have heard about how people may do this. I fear that other people in an inclusive community like the LGBTQA+ community would wave off problems I have like that sometimes.

The fact that it happens so casually in this comic confirms those fears. 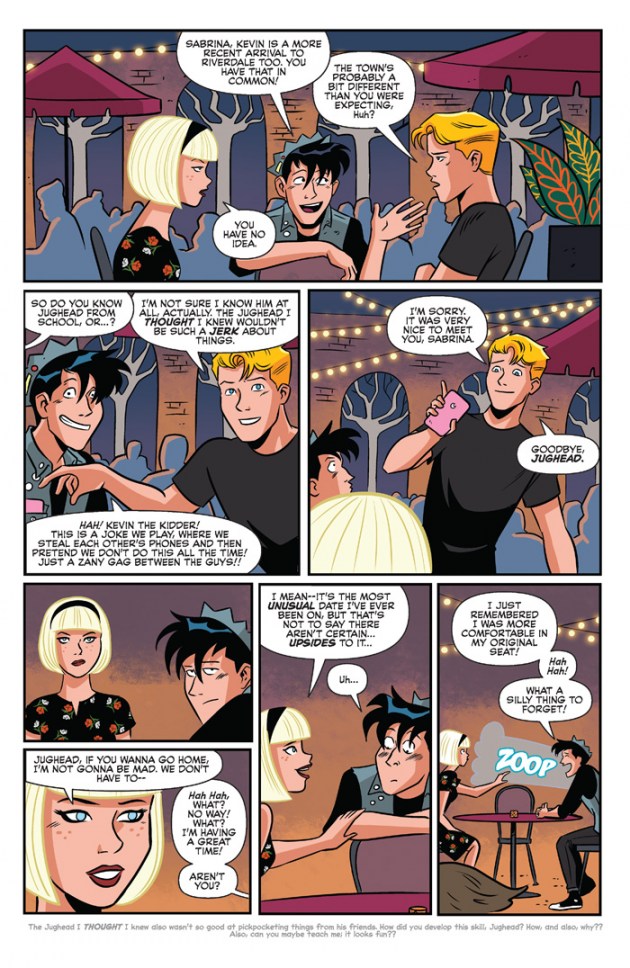 I’m not here to say asexuals necessarily have it rough or anything. I can’t complain too much about my life, I don’t know, it feels weird to do so. It’s not like I’ve ever had a target on me, it’s pretty easy to get by with no one pointing at you and thinking you’re a problem, that you’re some Other.

But it’s scenes like the date scene that remind me that, yes, asexual people aren’t talked about enough and it shows. We’re not understood to the extent to where their sexuality isn’t played as consecutive punch lines, even in a comic like Jughead, which is one of the best portrayals of an asexual person I’ve ever read.

Like I said in the tweet, it hurts how much I relate to Jughead sometimes. It really does. And it’s even more painful when I read it and learn what I’ve heard in rumors could be true — that asexual people aren’t necessarily taken seriously within the LGBTQA+ community or by anyone, really. None of Jughead’s friends care about how he feels.

Jughead is fantastic because Jughead’s character is deep and well developed; his asexuality isn’t his most prominent characteristic, it is often a side note in his stories. Scenes like this, however, where his asexuality comes to the forefront, remind me that this comic only scratches the surface of asexuality for the most part. It doesn’t ask questions about the Ace spectrum. 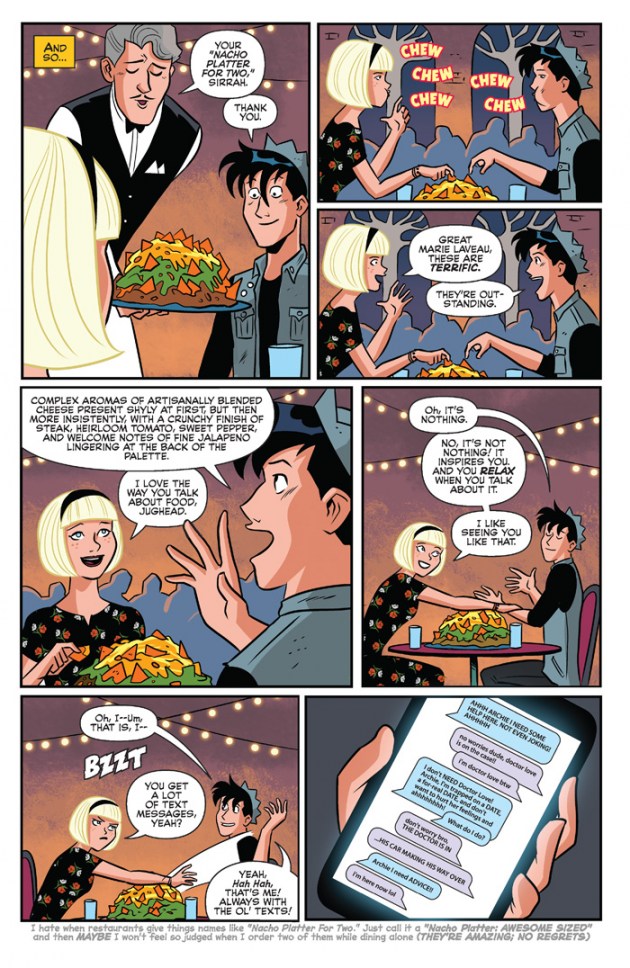 It doesn’t even go into romantic orientation, which can be integral to someone’s identity within the Ace community. Jughead, for instance, had one of the best days ever with Reggie in a friendship montage. Who’s to say that Jughead may not realize he’s asexual and homoromantic? If anything, throughout the series, Jughead has shown that he’s both asexual and aromantic, which would be an important distinction to point out.

Something that terrifies me about the date scene is also the implication that Jughead’s asexuality is what ruined everything, not the fact that they went on a date that just wouldn’t have worked with Jughead as a character in the first place. Asexual people date. They date successfully. It bothers me that a series that generally doesn’t make a big deal about Jughead’s sexuality has made it the problem this time around and specifically the reason the date didn’t work out.

The biggest problem here is that it’s treated in a way where the joke is: if he was just normal, his date would have gone great. What if you replaced an asexual person with a homosexual person here? Would that feel as funny or would it feel incredibly awkward to you? Because this scene just reminds me that, as an asexual person, Jughead is Other. I am Other. Not normal, Other. 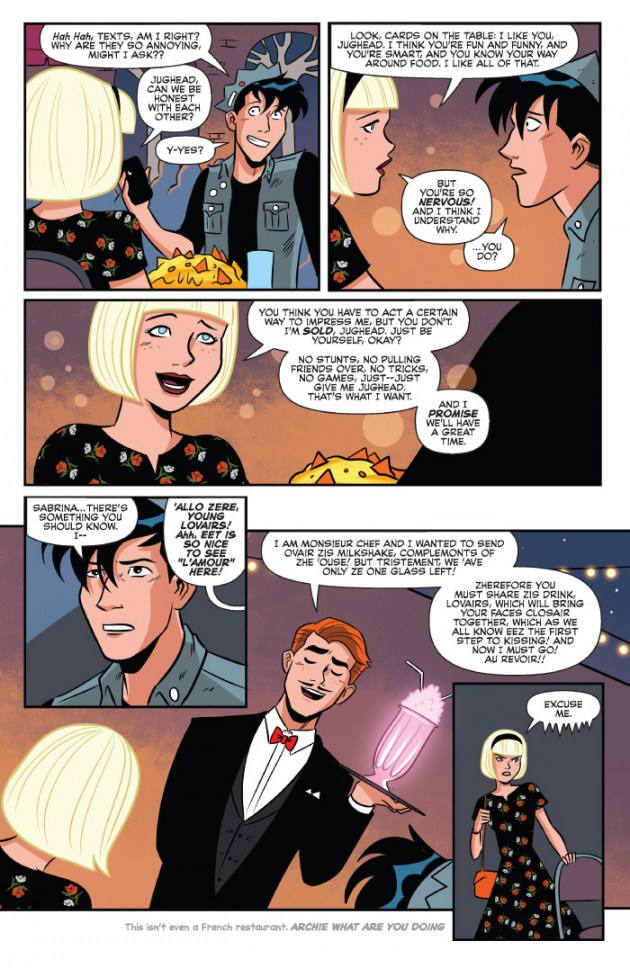 I highly recommend reading Jughead. Yes, the dating scene hurts me, but for the most part, it represents leaps and bounds for asexual people. It’s a hilarious comic. It deserves all the attention. The writers and artists who have worked on it have done wonderfully. It’s just times like the date scene that remind me that storylines dealing specifically with a person’s asexuality, in general, seem to be strangely hard for writers to wrap their heads around.

And perhaps this is building to something awesome. I wouldn’t put it past the team working on Jughead to pull out a complex and heartwarming ending to this new arc. It just bums me out when I see this and feel how little people with good intentions understand asexuality.