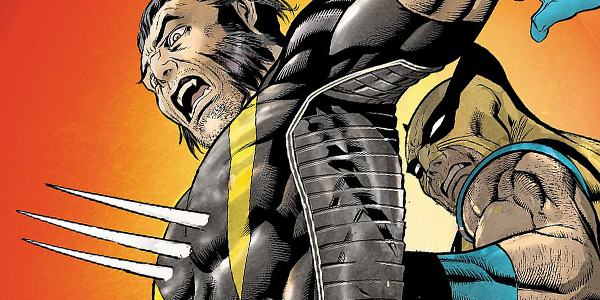 Age of Ultron ends not with a bang, but with complete nonsense.

Once again the double standard of Marvel fan rage compared to DC fan rage has left me flumoxed. Marvel has essentially done Flashpoint, integrating the Ultimate Universe and Angela into the Marvel Universe and no one seems to have noticed.

Age of Ultron is a 10-issue shaggy dog story, a wandering tale that goes on and on and ultimately fails to provide any conclusion that justifies the journey. Aside from that. I was left with the need to reread the 10th issue over and over trying to sort out a nagging question –

What I’m about to do is a painful reminder of why I hate time travel stories. Let’s check the scorecard first.

All four Logans experience the battle with Ultron. Logan 1 loses the fight and the world is destroyed. He then travels back in time, kills Hank Pym and enters the timeline where Morgan Le Fey is at war with the Defenders. Here he meets and beats up Logan 2.

Having accepted that his plan failed, Logan 1 again travels back to Ultron’s creation and talks his past self, Logan 3, out of killing Pym. After sorting out a new plan, both Logan 1 and 3 time travel to the revised present.

Logan 1, for reasons that will become even less clear, decides that only one of them can live. Since the X-universe is full of alternate dimensional versions and paradoxical characters (Rachael Summers, Bishop, X-Man, Blink, Age of Apocalypse Beast, etc), it is completely lost to me why this has to happen at all. Other than the author had an excess of Wolverines and was trying to tidy things up in the most exploitive way possible.

Logan 1 says “we don’t want to live with” what he saw in the magic war – despite them both having lived through the much more disturbing Age of Ultron. Logan 3 kills Logan 1 and sets off with Sue (I’m not even getting into the 3 Sue Storms) to find out if the plan worked.

Meanwhile we have Logan 4 who has lived his whole life up to and including the battle with Ultron. The plan works and Logan 4 and the Avengers defeat Ultron.

Logan 3 and Sue return to New York and Sue heads off in the flying car to see her children. Forgetting of course that they will be terrified by the second version of their mother who just turned up.

Then things go all shaky as a time quake causes an advertising feature on up-coming storylines to replace any sensible ending.

Some read this moment as eliminating Logan 3 (and presumably the superfluous Sue Storm) but he is shown on the following two pages.

And if those shakey panels were supposed to indicate that the remaining two Logans and two Sues were merging somehow (though how I have no idea), what was the purpose of killing the 3rd Logan in #9? Cheap shock value?

If he killed him because they thought they would merge and have all of the memories (this is a reach), why bother sending Sue off to see her kids? She would be disappearing in a moment anyway.

Please for the love of gods, tell me I’m wrong in the comments and offer an alternate reading. None of which should be about taking it too seriously or “it’s comics!” because Bendis has never been put forward as a writer of mindless fluff.

Keith is the co-host of the We Talk Comics podcast and is currently working on his pitch for “Nick Fury and the Adamantium Skeleton He Found Laying Outside His Hideout That Has Made Him A Bazillionaire.”