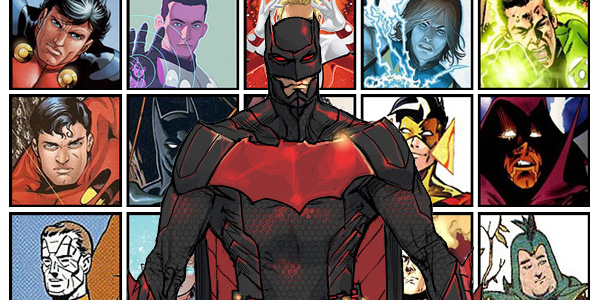 With the recent cancellation of the Legion of Super-Heroes title and the announcement that Justice League 3000 would be joining DC Comics’ New 52 this October, fans of both super-hero teams have been atwitter about the identities of the previewed characters. With little to no information to go on, speculation has run wild as to the cast writers Keith Giffen and J.M. DeMatteis, and artist Kevin Maguire, would be establishing for the new series, definitively set in the 31st Century. Best known for revitalizing the Justice League franchise in the late 1980s, the creative team is remaining mostly mum for now, but it’s certainly not too early to place your bets as far as we’re concerned!

Special thanks to Keith Callbeck, our intrepid CubReporterK, for letting me take over his column temporarily. I promise to leave it in the same condition I found it in, more or less. 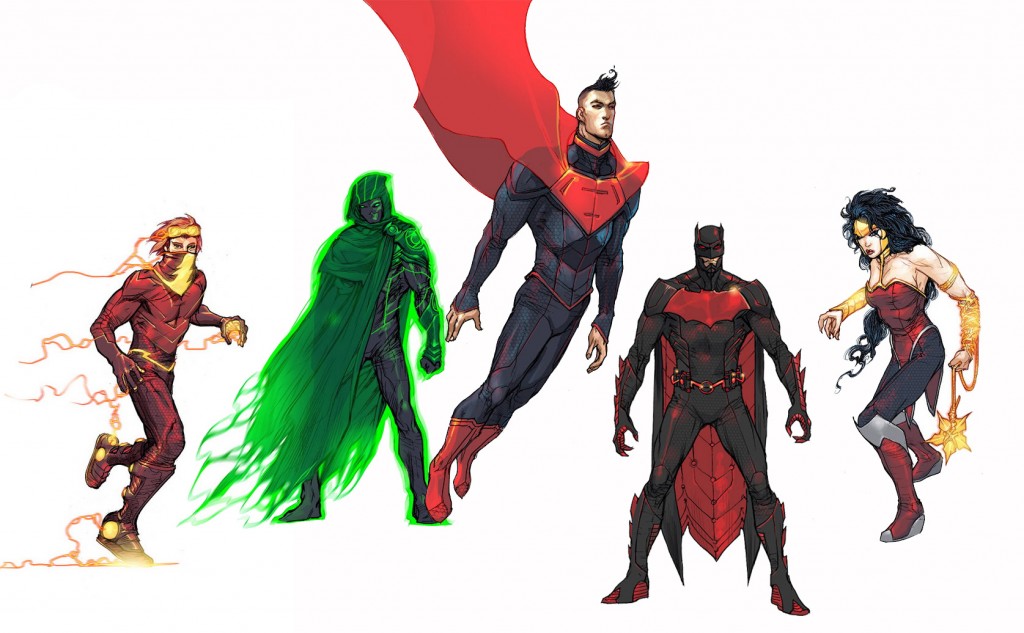 The hints so far…

Ever since we laid down the odds on the mystery of the new Batwing, it’s become more apparent that creators sometimes actually like to create! No strangers to bringing in brand new characters (G’Nort, anyone?) as much as revitalizing old ones, Giffen and company could be bringing in a fresh new crop of characters, even if their super-hero identities are some of the most iconic in the industry.

Clones of the Justice League

The idea that Giffen may be retreading an old idea (a la the SW6 clone batch of the original Legion of Super-Heroes) jumps out at us right away, and why not? This Justice League looks amazingly like other prominent versions of the heroes we’ve seen in the past. And with one thousand years to play with between today’s rather young New 52 League and the year 3000, Giffen and DeMatteis have their pick of heroes to choose from to clone. Sure, Kal and Diana seem like everlasting choices (and who’s to say they just didn’t SURVIVE until the 31st century?), but that Flash looks amazingly like potential future Flash Wally West. With Terry McGinnis and Simon Baz already foreshadowed in comics to take over their respective helms, we could be getting a JL we’ve never seen before, and maybe could never see in any other circumstances.

When Grant Morrison imagined the future in his JLA crossover event DC One Million, it was a combination of the Justice League and Legion of Super-Heroes that dominated the far flung universe. Led by a descendant of Superman (from his marriage to Lois Lane), the Justice Legion occupied the 853rd century, but with the New 52 revising continuity, could we be seeing these iterations develop thousands of years earlier in the timeline? And like that other super-team of the 31st century, these heroes each herald from or base themselves on a different homeworld, once again creating a much more galactic team for an advanced time. Sure, there was no Green Lantern in Morrison’s original vision, but the android Hourman certainly had the mystery and power about him that seems reminiscent now of this odd, new look the emerald warrior of this era is taking on.

Just because Justice League 3000 is set in the New 52 doesn’t necessarily mean it’s set on the Earth we read about in 51 of those monthly titles! Earth 2 has become a huge fan favorite and a second ongoing title for the world has been rumored for months, with no news surfacing. Could this be the next stealth Earth 2 title we’ve been waiting for? Certainly, the idea of that next generation of heroes, originally written as the sons and daughters of the Justice Society of America, has been bandied about in fan circles as being reinterpreted as the Legion of Earth 2 — an idea that earns a ton more merit when you look closely at Green Lantern. Could this be Todd Rice, a descendant of Alan Scott, returning to existence in a way that makes sense given Alan’s current young age in 2013? It’s not inconceivable that new heroes, genetically tied to their fore-bearers or not, could arise on this world a thousand years down the line. And wouldn’t it be great to see a new Hawkman (Northwind) and Atom (Nuklon) descended directly from Hawkgirl and the Al Pratt Atom arrive on the scene to join as well?

Back at C2E2, there was a lot of chatter, quite accidentally, at DC Comics’ panels about the return of the Crime Syndicate of America. And any analogue group to the Justice League that’s shrouded in mystery should come under suspicion, frankly, of being formed by these villainous counterparts from another world. And we may not even need to have an Earth 3 (the team’s homeworld in the Silver Age) to make it happen. With a now eternal (i.e. living dead) Thomas Wayne Jr. occupying the Owlman identity in the New 52, and massively powerful Volthoom making his massive comeback in Geoff Johns’ Green Lantern swan song, these characters could easily still be kicking around a thousand years in the future. And what could be more surprising (or predictable, depending on your level of fan malaise) than the arrival of a secret villain team like Marvel’s Thunderbolts in the wake of DC’s September Villains Month? Rumor has these characters appearing elsewhere in the DCU, but that is just rumor after all…

Well, the guys said it wasn’t the Legion of Super-Heroes, after all. On a technicality, the original members of the Subs could well qualify as the future World’s Greatest Super-Heroes… a role they’ve been striving for since being rejected for Legion membership, despite their bravery and overwhelming popularity. Not to mention, the Subs themselves hold a very special place for writer Keith Giffen, having been featured more than once in a central role in his tales. Night Girl clearly has the prowess (at least half the time) to take on the mantle of Wonder Woman, and with the rules of the Green amped way up for the New 52, it wouldn’t be inconceivable to see Chlorophyll Kid (like Alan Scott on Earth 2) able to take on the mantle of the Green Lantern with a magical connection to the Earth’s environment. And the idea that the Man of Steel is now replaced by an amped-up Man of Stone? That’s pretty awesome in itself.

Justice League 3000 is not a Legion of Super-Heroes book, much to the chagrin and relief (depending on who you ask) of scores of LSH fans. Or the writers could be deliberately misleading us. Or the team WAS the Legion, but conditions of the 31st century at the end of Paul Levitz’s run make that team — name and all — personae non grata. It’s not unprecedented for Mon-El to fill in for his brother-in-spirit Kal, and that Flash does have suspiciously red hair trailing off into lightning, leading one to wonder as to his connection to Garth Ranzz, original Legionnaire. Throw in a few disguises and some carefully managed illusions/new applications for their existing powers, and these core members of the formerly greatest hero team of the 31st century could be getting the biggest upgrade of their life. But then again, relaunching a book — even in shadowy terms — that sold so poorly almost immediately is not something DC has been wont to do as of late.

Decades ago, in the aftermath of confusion Crisis on Infinite Earths left the 30th century, Keith Giffen jumped forward the world of the Legion of Super-Heroes five years, and introduced a plethora of new characters — most of which have never been seen since. While the run itself is either much loved (Hello! Over here!) or much reviled (Boo!) for its darker take on a formerly bright future, this attitude could be exactly what the creators have in mind post-Levitz (once again), and would fit in well with the tone established across a lot of the New 52. Kent Shakespeare in particular would make a brilliant Superman, and Laurel Gand — envisioned like her cousin Mon-El to be raven-haired — would kick ass all over the cosmos as Wonder Woman. Alas, if the goal of the new title is to be new reader-friendly, this team seems like a huge stretch.

With every new title announcement, the opportunity to reclaim some of the characters we lost in the universal reboot of the New 52 seems too good a chance to pass up. And, as we’ve already said — repeatedly — that Flash looks a lot like Wally West. A far flung future could be the perfect restart for characters that just don’t seem to fit in this brave new world next to their predecessors or successors like Jaime Reyes, Barry Allen, and Kyle Rayner. Could Justice League 3000 be an opportunity to once again see the adopted son of Clark and Lois, or Wonder Woman’s long lost sister/clone/doppelganger/whatever Donna Troy, with potentially radical new origins? Probably not, but there’s always hope, I suppose!

No. That’s just too silly, even for Giffen and DeMatteis. Or is it?

So, what do YOU think? What are your guesses as to who the men and woman behind the masks are? Sound off below, shout out to us on Facebook or on Twitter to @Comicosity!