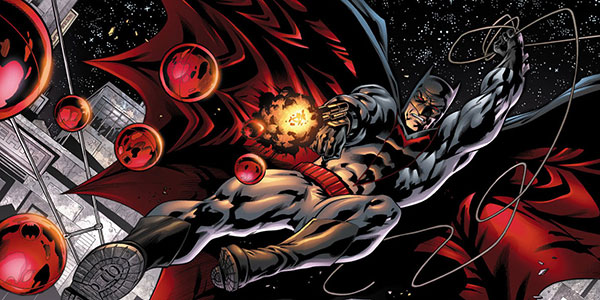 Fast on the heels of the Batwing mystery is that of the Batman of Earth 2. This character is very likely to be a focus of the rumoured Earth 2 spin-off book, so there will be a lot of attention on the hints. Having correctly predicted Batwing’s identity as “a new character with a familiar tie,” I make book on the next Bat mystery. To the Bat-Bookie!

Hints (mostly from James Robinson himself):

“This isn’t some new person coming in to be Batman. This is definitely a part of Batman lore.”

“this is a character that will be around permanently. He’s not going anywhere, he’s going to have a huge impact on Earth 2 and on the whole DC Universe.”

“This is definitely a big character we’re bringing into the DC world. This isn’t a gimmick”

The costume has great similarities to that of the Flashpoint Thomas Wayne Batman down to the red eyes and a similar emblem. That the animated Flashpoint will coincide with this storyline is extra evidence for this one. What would shake Prime Earth’s Bruce more than suddenly discovering his father through a mirror darkly?

Moving the odds up in this case. The star of the successful and beloved series Batman Beyond, Terry was a highly favoured pick for Batwing. Either a new version of Terry or even a time jumped one.

Robinson has a lot of characters on his wishlist and there may well be a JSA character or two who would fit the cowl. Red Bee, Peter Cannon and so many others are waiting their turn.

We’ve seen no references to a Dick Grayson on Earth 2 but the pre-Crisis Earth 2 Robin was a well-established character. That Huntress has not encountered Prime Earth’s Nightwing lends a bit of weight to this theory.

Just outside Grayson’s odds, they have been trying to move Jason closer into the Bat-universe and perhaps a 2nd variation would up the ante.

A classic character with a tough heritage. The use of the robotic Manhunters in Green Lantern limits the use of the character unless he is merged with another identity.

The impact of a new character is always less so the odds in this case are a bit further out. Robinson is not known for exageration, so I take his word that this reveal will carry some weight.

The Bruce Wayne of Earth 2 died fighting the forces of Darkseid, or did he? If Bruce escaped certain death, he will be in a world that has grown darker since the times of the Wonders and who is also mourning the apparent death of his world-hopping daughter.

Giving Bard the same odds I gave him for Batwing, mostly because I still don’t remember him but he has a bit of a following. Bard was a private investigator who worked for Batman in the One Year Later era.

Either Lincoln March or an Earth 2 Wayne sibling to take up the family business.

John R. Blake from The Dark Knight Rises might still pop up in the DCU in some fashion, though as time stretches since the last film it becomes less likely.

We know Grant is present on Earth 2, but there is a chance that he will bypass the Wildcat costume in favour of a different animal-inspired suit.

A perennial fan favourite who has been on the bench since being retconned out of even being dead in the New 52. Perhaps Ted’s life took a different path, one without a scarab. We are getting outside of the core Batman lore characters but Kord still has history here.

The Jack Kirby-created Guardian has been warming the bench along with so many of the 70s-revived Golden Age characters. His street level approach would be a good fit for a new Bat.

Could one of Earth 2’s greatest villains be trying to redeem himself? Probably not, especially since he has the whole of the World Army at his disposal now, but there’s a chance.

The first Prime/Earth 2 crossover is coming up in the pages of Batman/Superman in July, could our Bruce be taking a leave of absence to sort out that world?

A time-displaced older Bruce circa Dark Knight Returns just in time to meet up with Carrie Kelley?

A key character in the classic Earth 2, the late president FDR is going to take all of Robinson’s skill to reintroduce in the New 52.

Batman of Earth 2 is introduced in the Earth 2 Annual #1 and his identity will be revealed in a later issue.

Keith is the co-host of the We Talk Comics podcast and couldn’t find a way to shoe-horn a Booster Gold reference into this odds sheet.