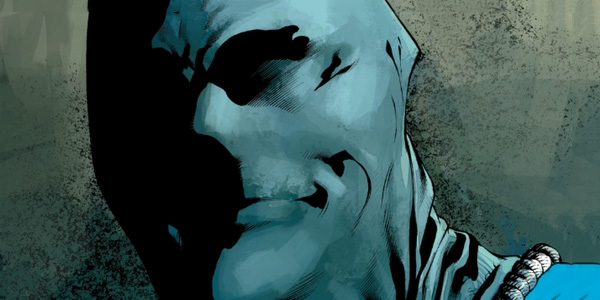 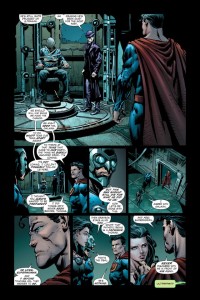 Ultraman: “How is our Hitchhiker doing, Alfred?”

Grid: “The unknown refuse from your planet…”

Grid: “I struggle to reconcile the perceived threat you suggest with his biological scans. By all accounts, all I see is a normal man.”

The Outsider: “He is far from normal.”

At the end of the issue someone says “Soon” to the hooded man who appears to smile.

Long absent from DC having only appeared in four issues since the end of Justice League International, Booster is a favourite of Johns, still a potential TV property and in need of a high-profile relaunch.

The traditional enemy of the Crime Syndicate, Alexander has always been the odds on pick. That it is the obvious choice is the only reason I slide the odds a bit.

Connected to the Earth 3 Big Bad, this new version of Starro would appear to be human but would be linked to a world conquering enemy.

The reference to what the Hooded Man did to the team implies a tight connection to the group. Could Grayson be the traitor?

Dr. Palmer has been used on Prime Earth as a scientist working for SHADE but was never the Atom in this continuity. With the traitor being revealed, it leaves a tiny (pun intended) gap in the JL line-up.

I don’t know how Joker of Earth 3 would stop whatever the Big Bad is, but it is the highest profile villain-turned-good-guy they could do. And it could be an interesting way to bring back in a more traditional (i.e. with a face) Joker.

We haven’t seen the Hooded Man speak and Grid scans him as normal. Which would fit for a gagged un-Shazamed character.

Damian has already appeared in an alternate future story since his death. Could this be the way to get a teenage Robin back in the New 52?

Not a traditional part of the Crime Syndicate, he is one of the Silver Age DC heroes not represented by a double on that team. Earth 2 recently introducing Red Arrow lowers the odds we’ll see a third arrow right now.

With Batman Beyond arriving in the New 52: Futures End, post a war between the Earths, could this be the way he shows up in main continuity for the first time? Not likely given Geoff Johns isn’t the creative driver behind that series.

The identity of the Hooded Man is revealed in Forever Evil #6 which ships March 5 from DC Comics.

Keith is the co-host of the We Talk Comics podcast and correctly predicted the identities of Batwing and the Batman of Earth 2.