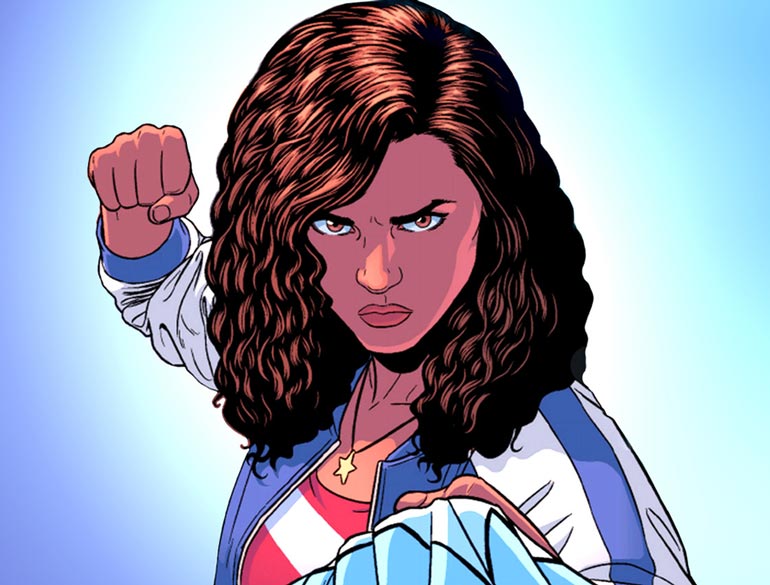 It’s time for a star-spangled new Representation and Health 101!

The character I’m going to discuss today is one who I immediately found intriguing. I discovered her in the pages of the latest volume of Young Avengers, but she actually showed up a couple of years before in 2011. She’s a young powerhouse with a stellar powerset, with snark and wit to boot. Let’s get to discussing the powerful and gutsy America Chavez!

America first stomped a star shaped hole into the Marvel Universe in Vengeance #1. Working with the Teen Brigade, she helped to rescue the In-Betweener and stomp a team of supervillains. From there, she went on to join the Young Avengers, helping Wiccan and crew against the parasitic Mother.

Now, America serves as part of the dimension traversing Ultimates, fighting omniversal threats to the 616.

There’s a few valuable things about America. For one, she is both Latina and a lesbian. It’s rare to get either one of these identities, let alone rolled up into one person. Creating characters that are at the intersection of identities is vital, and very often the comics industry settles for one identity or another.

The fact that America is a character whose written well is another wonderful feat. She doesn’t feel like a reductive character, she has personality, and she is unwavering in her feelings. There are some points of contention for me, but they are minor compared to the impact I see she could have on how people cope. 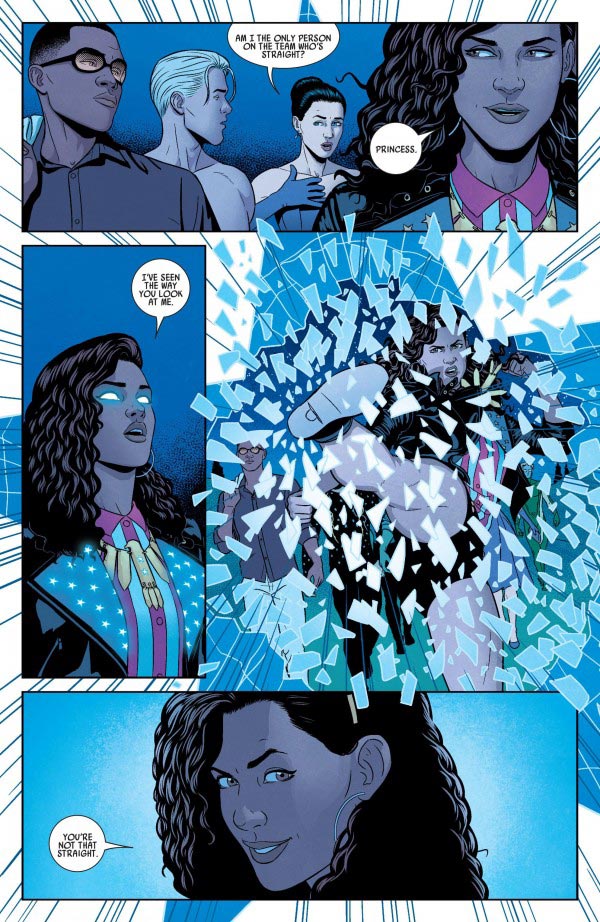 Considering that people of color are routinely left out of discussions of queer identity, America is a character who could embolden Latinx queer people. I’ve spoken on this before, but when discussing representation it’s important to address characters who face active marginalization, but also those who do not appear to be overtly affected by it.

For characters like America, it could be easy to create a narrative around her where she deals with barriers, but it’s great that we have a character with intersecting identities who gets to live her life.

In addition to her identities, America is one of relatively few women with her powerset. It seems rather uncommon for women of color, or women in general, to be given the power of super-strength and invulnerability, typically masculinized superpowers. America utilizes these powers in a way that is not shackled by the expectations of others. 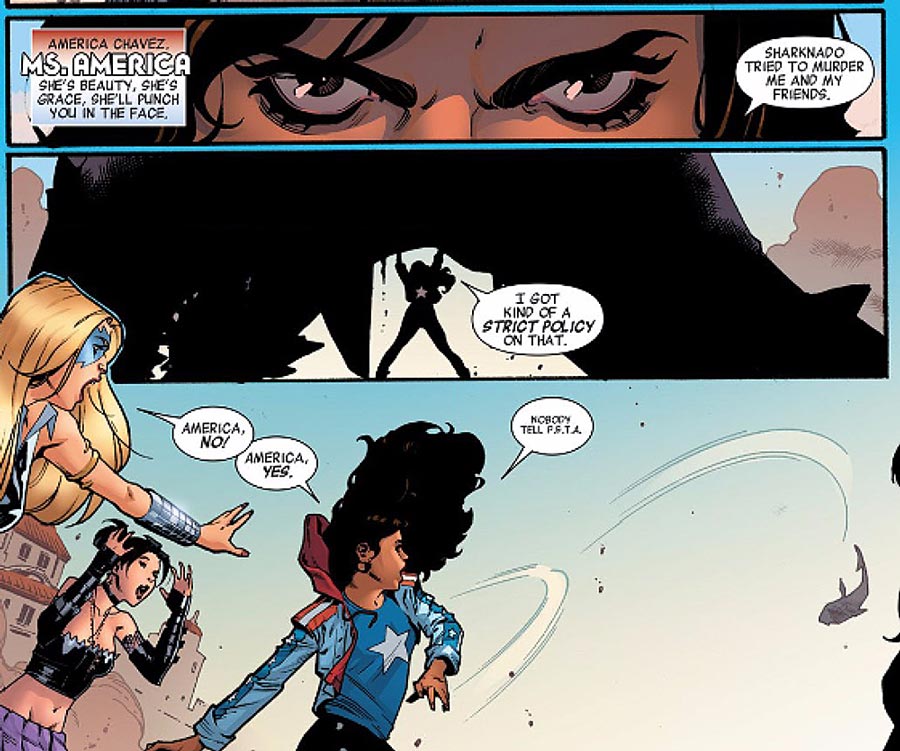 While taking place in a different reality, her tossing a shark over a gigantic wall in the Secret Wars A-Force series is a testament to her will and determination. She’s a character who doesn’t take no for an answer and asserts her values. When you add in the fact that she is non-heterosexual and Latina, her presence is that much more vital, hitting on the reality that no matter what axes of oppression you may face, you have every right to be who you are. Though there are obvious barriers, particularly for Latinx and/or queer people, such an ideal can be used to discuss how people can be authentically themselves while remaining safe.

I like America not just because she’s bad ass, but she’s the perfect avatar for agency and autonomy. Characters like her in various media help people see themselves as powerful, sometimes despite less than affirming environments. 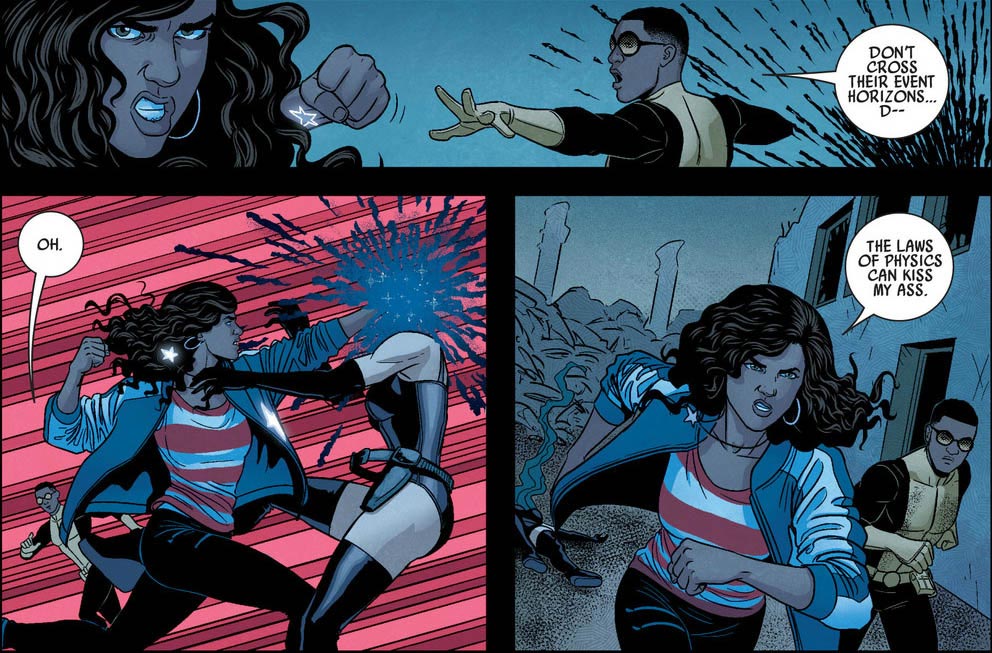 As one of the few Latinx queer people in comics, I imagine she could be monumental for many people in developing a well of self-love. It’s not uncommon for me to hear that people resonate with powerful characters because they help them feel like they can accomplish more than what their environment says. The fact that many comic readers have someone who looks and feels like them could take that resonance and help them have a jumping point to address their issues.

In some ways, America provides the opportunity of modeling by proxy. How this could play out in the therapeutic setting is discussing her actions in the context of a client’s life. Such a process could mean pointing to her interactions with Loki and saying, “What is America doing here? How could you apply this in your life?” which would be a basic application.

Going more advanced, you could take her approach to others and ask “What does it mean for you to read this? What do you find valuable here?” America has a lot of potential for use in therapy by openly and deliberately discussing who she is and what that means when taking her various identities into consideration. 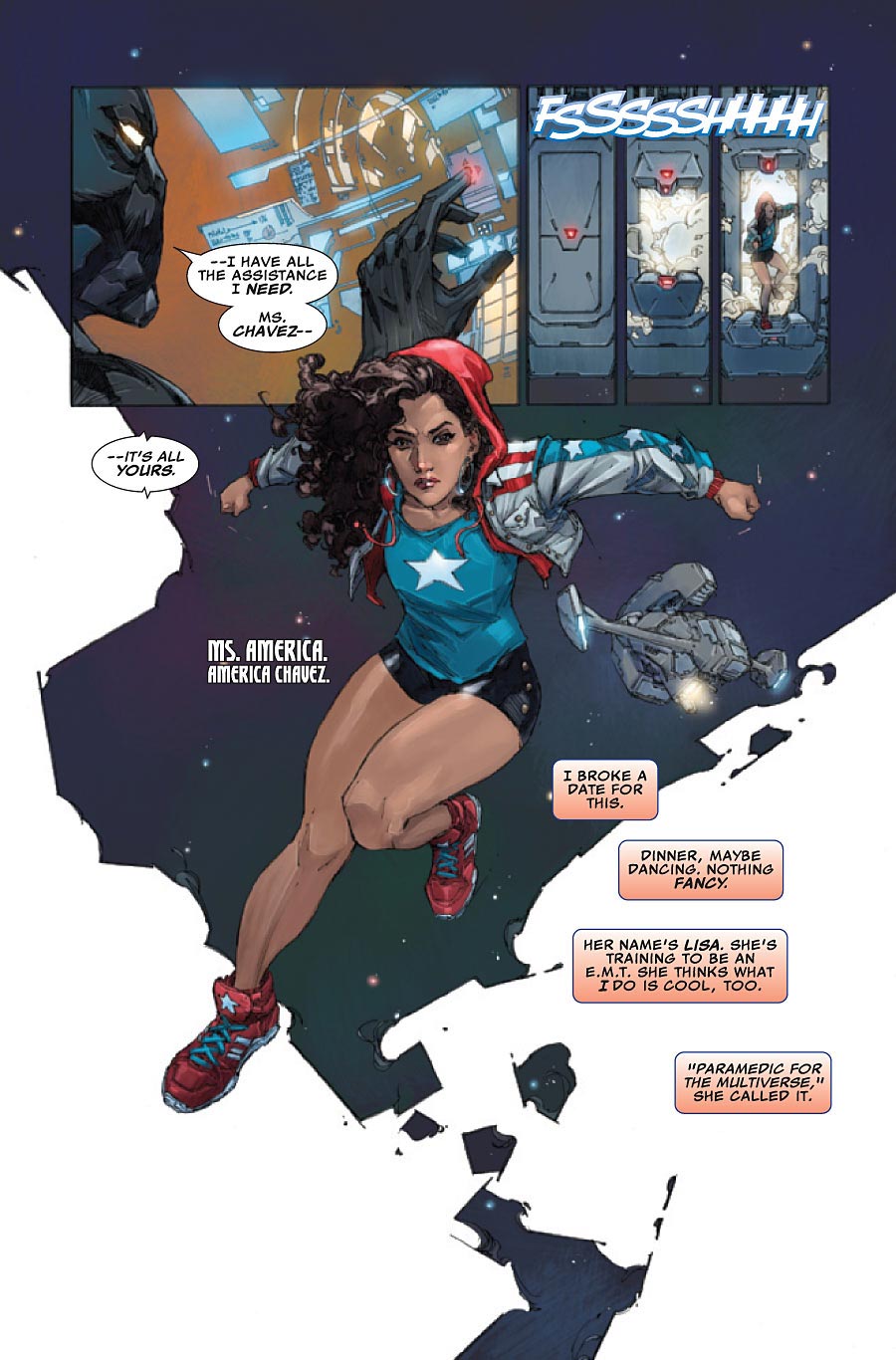 What I’d like to see with America in the future is an active exploration of her identities. There are some moments with her that are queer-ish, but relatively few that openly portray her romantically with other women. I’d also like to see a slight departure from Spanish turns of phrase peppered through her dialogue. While I recognize she is Latina, I find it odd and slightly humorous that such a thing happens so often considering that she grew up in another dimension (though this may be neither here nor there).

What do you find valuable or helpful about America? How have you felt about her presence in comics and the Marvel Universe? Let me know over on Twitter at @80Grey!