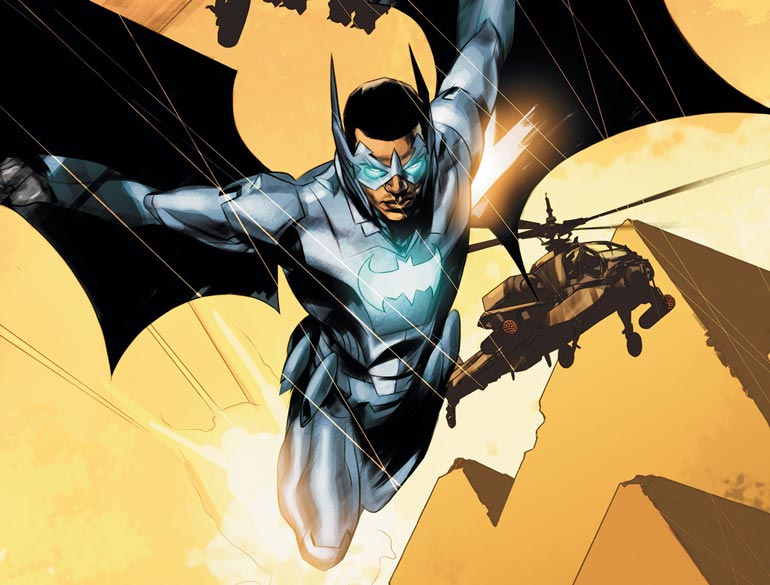 Welcome to the next installment of the Representation and Health Black History Spectacular! For today’s column, I wanted to focus on someone I was excited to read when he first appeared. He’s someone I enjoyed reading as New 52 rolled out, but I also think he addresses some important issues regarding Blackness and the different identities that compose it. So, this particular installment is going to highlight David Zavimbe, otherwise known as Batwing.

As Batman was gathering an international force to fight the organization Leviathan, he recruited David as an emissary of Africa (and we will definitely address this later), his first appearance in Batman Incorporated #5. He would go on to help Batman in his global fight against this criminal group, eventually gaining a solo presence in Batwing, one of the New 52 launch series. David would continue this stint for at least a year and a half until his title was given to Luke Fox, son of Lucius Fox, in Batwing #19.

David as a Bat is a very big deal. For one, no Black character has held the title even close to Batman, and branding him as part of the Bat-family is huge. We have a Black man close to one part of the DC Trinity, essentially cementing his importance in the DCU. Much like Sam Wilson becoming Captain America, these moves are important because they change the status quo of comics and challenge the idea that only White people can be at the top. However, there’s much more to David’s story. 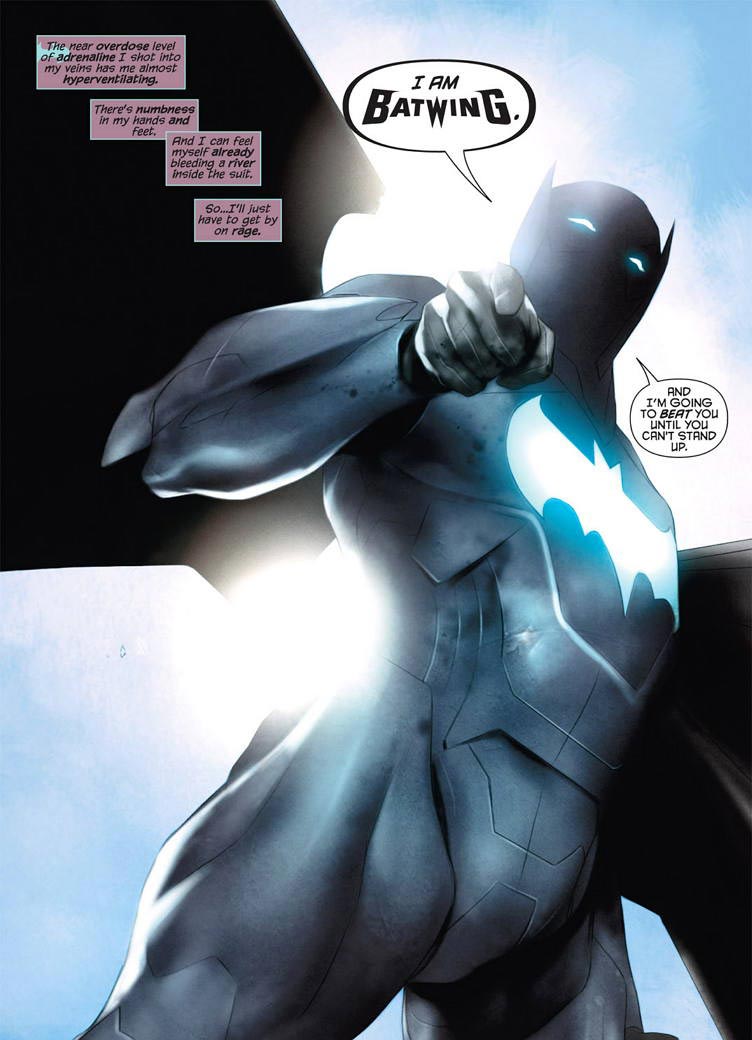 For one, David is essentially cast as the ‘Batman of Africa,’ forgetting that Africa has many countries with many different cultures and tribes. While it’s good that the stories eventually focused on him in a specific locale, they initially perpetuated the idea of ‘Africa as a country,’ not as unique and distinct communities.

This error is commonly repeated, not only in literature but in everyday language. We forget that Africa was likely home to our earliest ancestors, but also houses a wide range of cultures. Some of them are modern and metropolitan, while others focus on more traditional or ancestral practices. This does not mean that African communities are behind or primitive when you look closely. Instead, we must honor that many African cultures have rich histories behind them that carry on today.

Within the first arc of Batwing, the series did well by creating an entire mythos surrounding David and his life growing up. There was a superhero team, The Kingdom, native to David’s region, and there were longstanding consequences to military and hero action in his home.

Such a move is important considering that when we use mythology in fiction, it tends to focus on Eurocentric pantheons, such as the Greek and Norse pantheons. People forget that there were myths and deities native to many people of color, not just White people. Though a small part of David’s story, these narrative elements are important in challenging the idea that people of color, particularly Black people, do not have a culture. 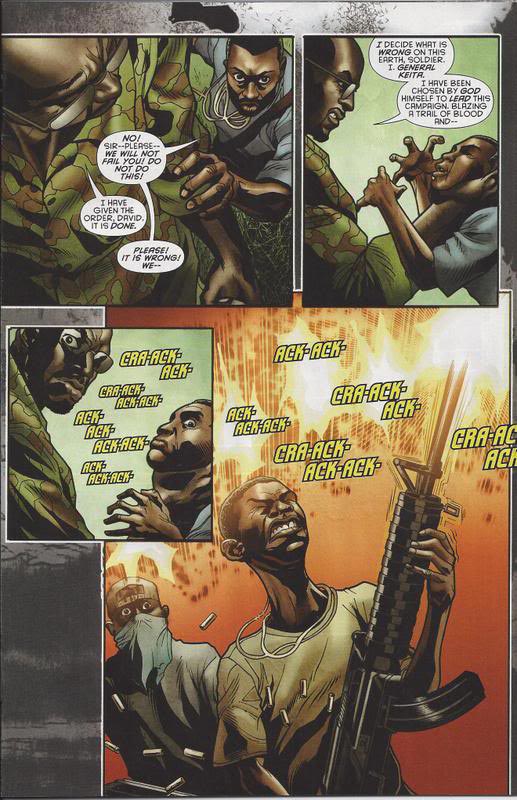 David’s history is also mired by the atrocities of war and child soldiers. He and his brother were recruited to do many terrible actions under the guidance of a sadistic leader. While I am not fully equipped to discuss the ramifications of these actions, I can speak to how they impact the development of children in violent and chaotic climates.

In some ways, David’s story is much like a stereotype, insisting that young African boys must obviously have been recruited to military factions. We must question such narratives and challenge their relevancy when used in mainstream comics. However, I appreciated that David and his brother, Isaac, went down very different paths based on their childhood. While their background is not a departure from describing African characters, it does at least examine the different trajectories that lives can follow under similar circumstances. 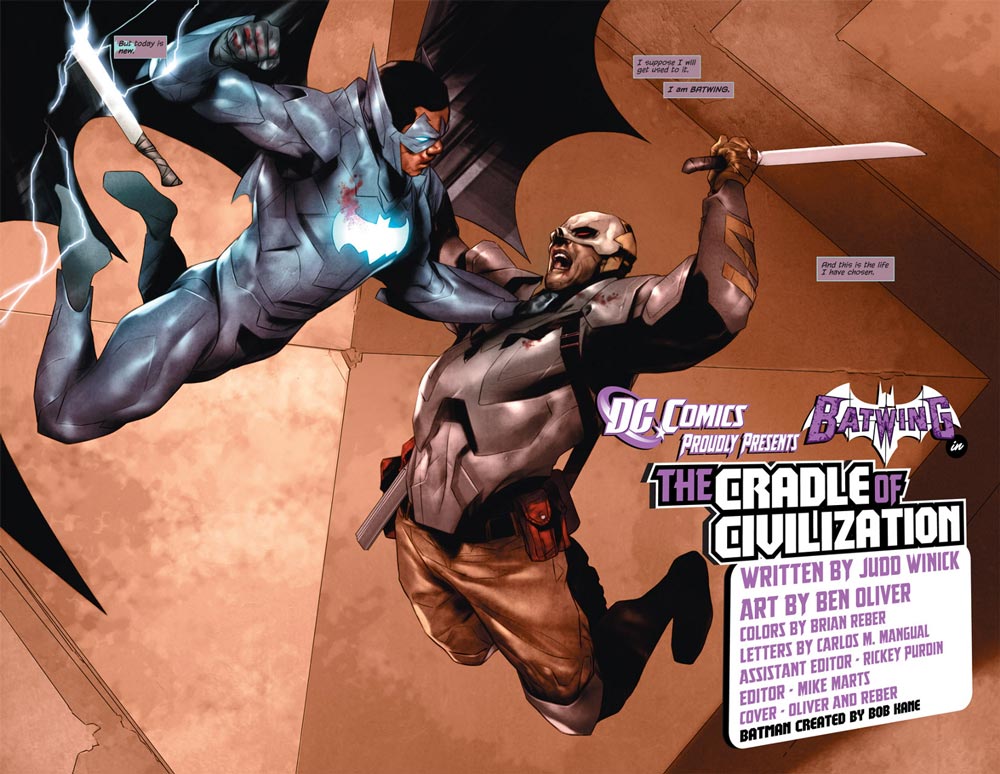 One of my favorite things about reading David as Batwing was that he created a sense of autonomy for himself. While he was enabled by Batman and technology to be a hero for his home, he still struggled with very human dilemmas. Instead of simply a Black Batman kicking ass, David was a man from the Congo with a real past and very real trials. His presence helped to create a new part of the Bat mythos by focusing on the lens of a Black man in a place with significant troubles for his people.

Much of Blackness focuses on Black Americans, especially in American media, and that makes sense. However, what we also need is an examination of characters from the diaspora. We are not all the descendents of slaves in America, and that doesn’t mean anyone’s history is less honorable. Blackness exists across the globe and more stories should focus on this. Such a reality is why I appreciate David, as he expands a conception of Blackness beyond our national borders and explores what it means to be a Black African hero on another continent.

Yes, we need expansive stories regarding Blackness, but we also need creators to tell these stories. Hiring African, West Indian, Afro-Latinx, and Black Indigenous creators helps to expand stories, comics, but also how we perceive Blackness. We show up in a lot of different ways, and to assume that that is bound by an American understanding is erroneous. I will never tout my history as a Black American as more important than my skinfolks’, but I will most certainly highlight the importance of broadening our understanding of Black narratives. 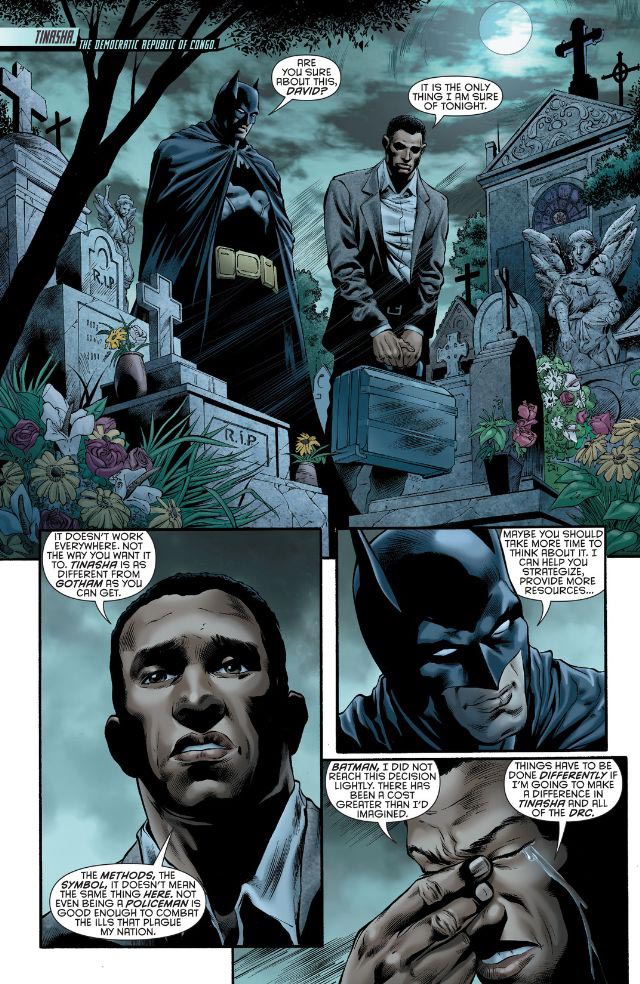 How did you feel to finally have a Black Batman (even if he didn’t take the same moniker)? Who are some other African characters in comics that enhance our understanding of Blackness? Let me know on Twitter at @80Grey!