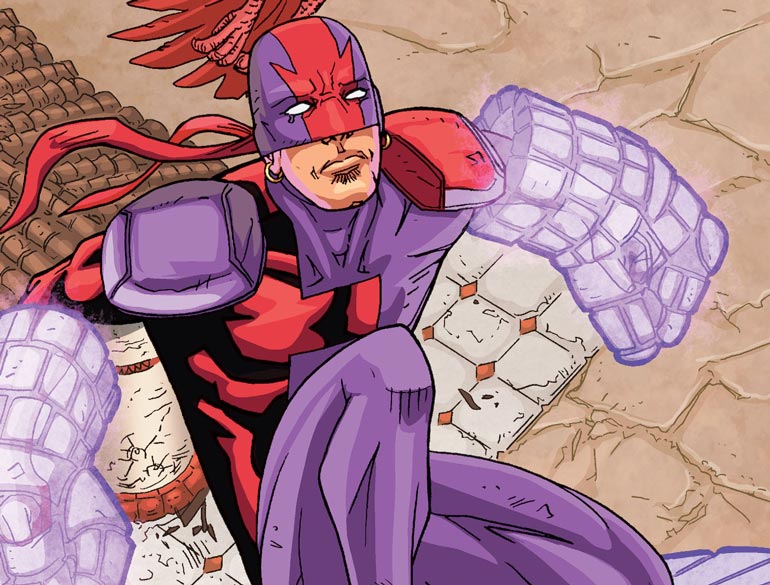 Here we are with a brand spanking new installment of Representation and Health 101! In this ongoing journey to ascertain what makes diverse characters important and curative, we have gone over a slew of people from all sorts of companies.

Today’s focus is someone who immediately caught my attention when he was introduced because of his authenticity and departure from comic convention. While you could argue his presentation isn’t different from what we typically get, I found it a means of affirming parts of myself that typically are used for jokes or caricatures. Without further ado, I present to you, Bunker aka Miguel Jose Barragan. 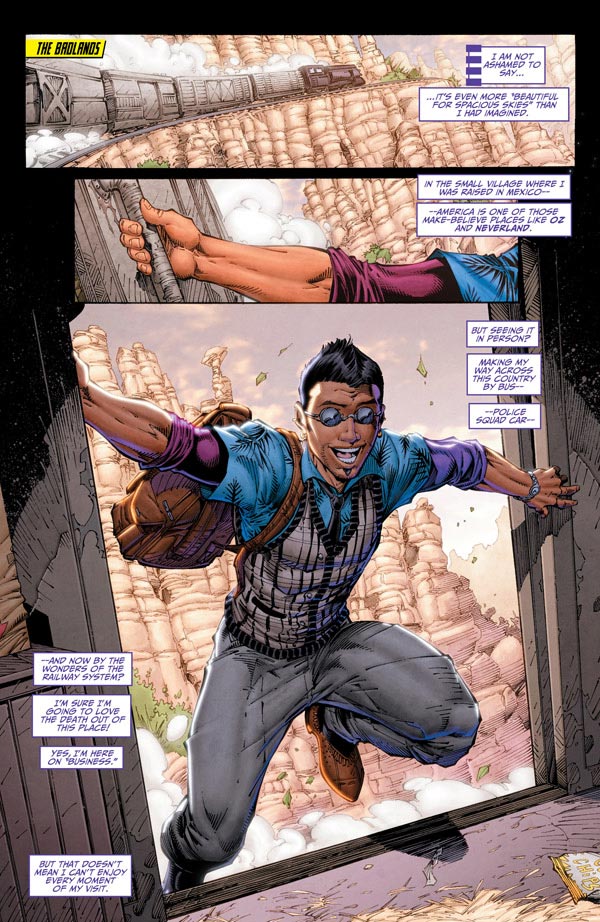 Miguel first appeared in the New 52 relaunch of the Teen Titans. When we met him, he was seeking out Red Robin in order to be a superhero. Gifted with the ability to create psionic purple constructs, Miguel would quickly find his way into the ranks of the Teen Titans, helping them in their first encounter with Superboy and against the threat of Harvest. Though he left the team briefly, he is presently in the roster with the rest of his friends, helping to quell a number of metahuman threats.

When I first came across Miguel, I immediately saw myself. However, this is a problem for a couple of reasons.

For one, there are very few Black gay men in comics, if any, that create the opportunity for us to identify. Second, Miguel as one character demonstrates the reality that representation of marginalized people sometimes needs to be devoid of oppression or struggle. He carries the weight of representing the paltry number of specifically gay men of color in the spotlight while also shouldering the responsibility of a narrative that does not address marginalization. These parts of Miguel as a character are paradoxical, illustrated in his ability to enhance representation but also highlight some of its problems. 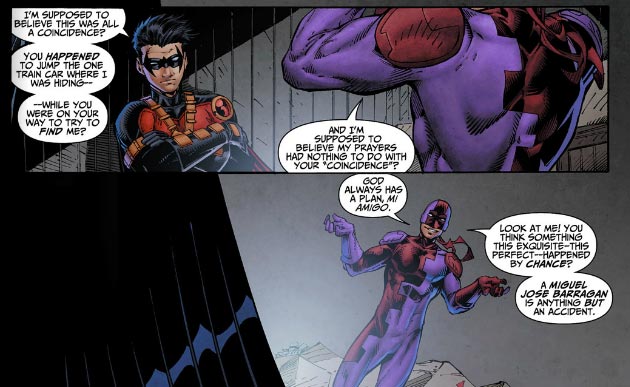 One of the most important parts of Miguel is his existence as a character unshackled by oppression, his narrative not mired by the very real homophobia many people, especially gay men of color and specifically Latinos, experience. He is happy, optimistic, and funny. I can see how this is easily shoehorned into stereotypes of being gay, yet I also found a home in it.

How often do we get a character like Miguel who feels the confidence and freedom to be himself? To reduce him to a product of easy stereotypes feels erroneous. Despite his witty quips and demeanor, Miguel has felt like one of the most accessible gay men in comics I’ve ever read.

What makes Miguel curative to read is that he represents a departure from the sometimes painful lived experiences of gay men of color, particularly Latino gay men. Similar to Black men, Latino gay men are affected by strict codes of masculinity within culture. To defy them often means varying degrees of separation from one’s support group. Yet, he provides an opportunity to examine a life unencumbered, a life of authenticity that is grounded in support and love. Narratives like Miguel’s are important because they offer a glimpse of life that is inundated with love and healing. 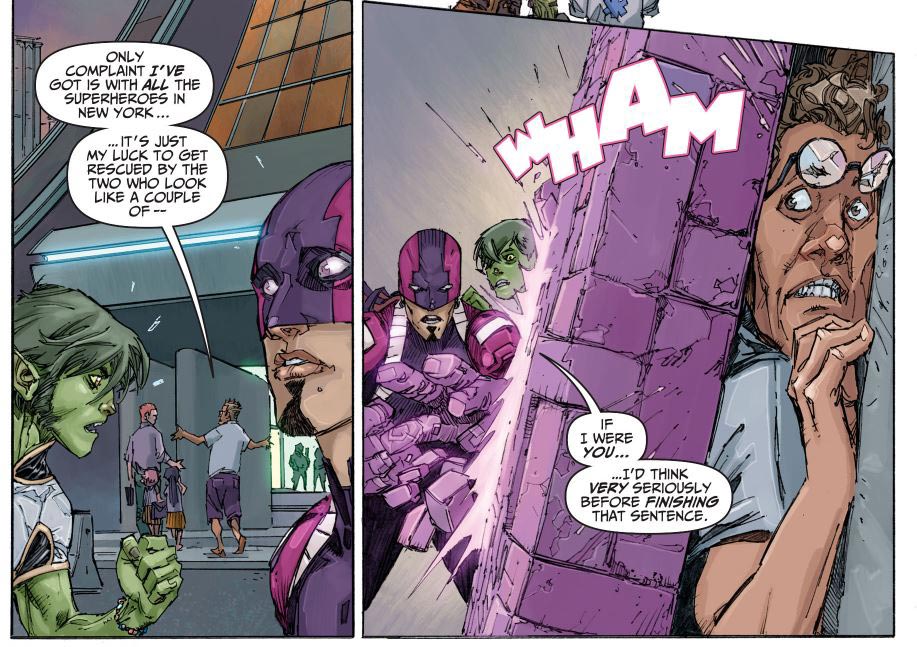 These types of stories are important because they betray the common notion that gay men of color always face struggle within their families. Yes, that is a reality many of us face, but that story also doesn’t belong to everyone. Sometimes, it’s important to see yourself in someone who does not face emotional and familial strife. It may not be apparent, but characters like Miguel actually give Latino and other gay men of color a chance to process what support and affection look like and where to find it.

I’d much rather someone encounter their sexual orientation through him than the sometimes unfortunate ways many young gay men do. Having a semblance of a peaceful life primes young gay men of color to look for something beyond what the media presents them. 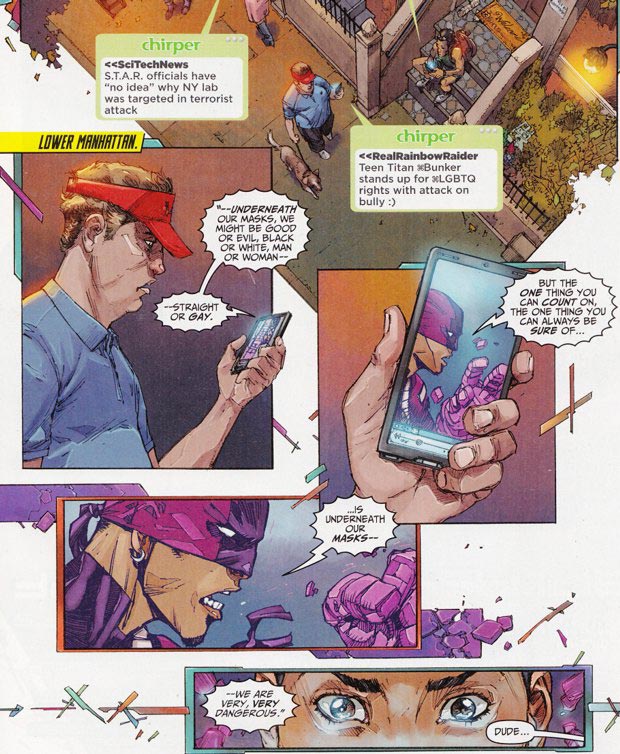 While Miguel has therapeutic utility, there’s still something to address with his creation. Scott Lobdell and Brett Booth, two heterosexual men, were responsible for bringing Bunker into the comics. The choice to make him “flamboyant” was a deliberate choice according to Booth. This decision made by two heterosexual men is tricky, especially considering that many of Miguel’s qualities are what heterosexual men and society erroneously think represents all gay men.

Yet, Booth’s rationale is important: gay men don’t have to be “straight-acting” to be acceptable.  Yes, the reliance on stereotypes is an easy and problematic target, but Booth also had a point in that we don’t see characters like Miguel who are real and not just a function of the campy, flamboyant stereotype, the butt of an extended joke about being gay. Miguel gets a chance to be dynamic and well-rounded, providing a context to his presentation. 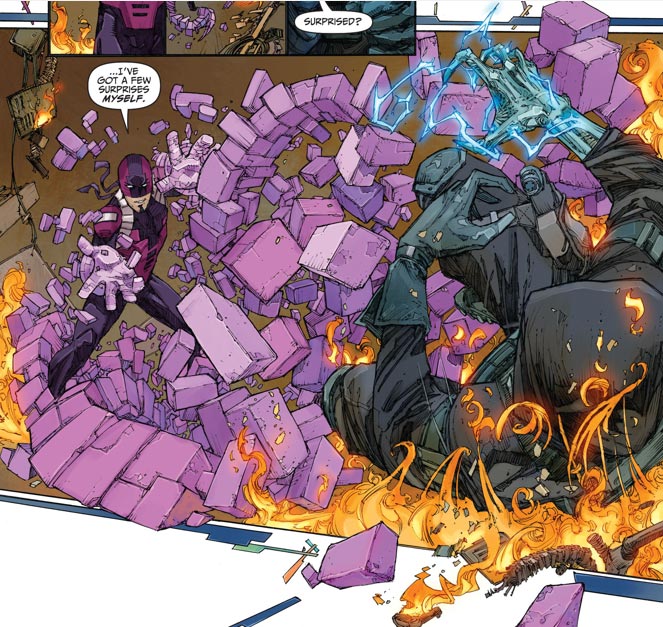 There’s something affirming in Miguel regarding how he interacts with the world around him. He looks and acts like many gay men do, not the image that many heterosexual creators often use in effort to avoid conflict or critique. Booth is right: he and Lobdell towed a delicate line in creating Miguel.

At the end of the day, I’m glad they did. He has felt like a more real character to me, and one who reflects a part of myself I am often hesitant to share with those around me. He also highlights the intersection of Latinx identity with being gay, as well as one iteration of authenticity that is often restricted in gay men of color.

How have you felt about Bunker’s presence in DC Comics? What would you like to see done with him in the future? Let me know on Twitter at @80Grey!