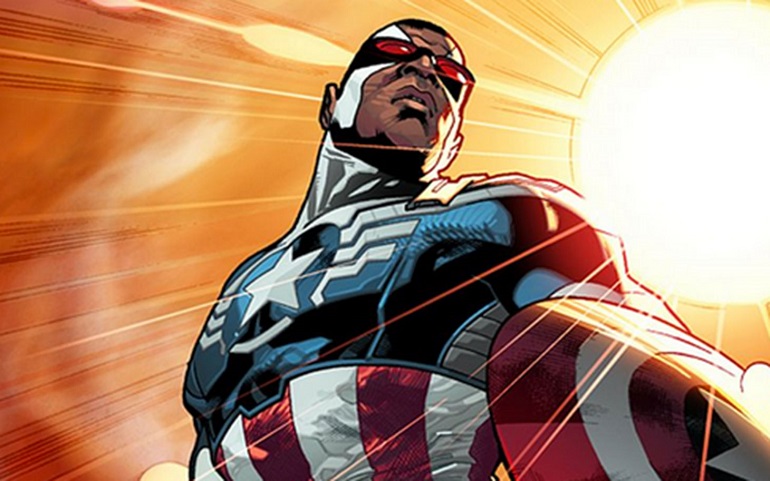 Here we are in one of the last installments of the Representation and Health Black History Spectacular! Today’s character was one of Marvel’s most prominent Black heroes and has risen to prominence, especially in the past year. He’s been a steadfast friend of Captain America and a mainstay of the Avengers. Whether flying through the skies or brandishing a shield, he’s an amazing and honorable man. I present to you Falcon, aka Sam Wilson!

Sam appeared for the first time in Captain America #117 in 1969, quickly making his way to being Steve’s regular partner for many years. Sam’s donning of the Falcon mantle was eventually revealed to be a plan set by Red Skull to have Steve’s confidant and best friend turned against him. He would eventually recover, though Red Skull’s meddling would lead to a brief identity crisis as he ran for Congress. From his first appearance, Sam would maintain strong ties with the Avengers, helping them through the events of Disassembled, House of M, Civil War, and Avengers vs. X-Men. Now, Sam carries the heavy shield and mantle of Captain America in his own series and in the pages of All-New All-Different Avengers.

Finding Black men in comics who don’t turn to crime at some point in their history or who aren’t incarcerated is pretty damn hard. Sam taking on the “Snap” persona as a defense mechanism is grounded in racial stereotypes of Black men that still persist. In a retcon, Rick Remender addresses this narrative in All-New Captain America #3, in which it is revealed that the Red Skull’s tampering of Sam’s mind created the idea of “Snap” to “discredit” Sam. I’m glad that Remender decided to remedy this less than savory portrayal of Sam from the 70s and 80s, though I also recognize that we must be careful with such changes to continuity. Rather than altering continuity, there may be other avenues through which to separate Black men from criminality in comics, but also methods to provide ways Black men can find redemption through heroism after brushes with crime.

Saying, “Oh that didn’t really happen, a racist made that up,” sometimes ignores that crime can be a more reasonable option for people when they lack resources. This doesn’t excuse criminality, but it does help us understand why some Black people adopt a life involving drugs and theft in a society that does not often provide them with opportunities. It’s also worth mentioning that Sam’s actions as “Snap” were verified by his family and others who sought to tarnish his reputation and chances for reaching Congress. Ignoring these elements in an effort to make Sam look “good” may actually be more harmful than thought, even if well intended, because they try to paint us as wholly good when that may not be true. Being human and having good representation means taking us for our good and our bad, our mistakes and our triumphs, so I think “Snap” serves to enhance Sam’s awesome qualities rather than sully them.

No, I don’t like that a majority of Black men in comics have some kind of criminal history, but I do like that they become heroes despite rough or disadvantaged backgrounds. While we need to move to narratives surrounding Black men that do not involve crime or legal intervention, we also don’t need to erase history in an effort for things to appear more palatable. This is a thin line to toe, but still one that we need to approach with delicacy and caution. Sometimes, the efforts we take to undo racist narratives and histories are still grounded in a White understanding of being Black.

Sam becoming Captain America was a major move for Marvel and a highly symbolic action. For a Black man to be Cap in action, not just a historical retrospective as with Isaiah Bradley, is important because it challenges the idea of Whiteness as the American ideal. This editorial change has also stuck, giving me the indication that Sam is going to carry the famous shield for a while. The reality that Sam isn’t just at the mercy of editorial decisions to “shake things up” means that there is at least some dedication to changing the status quo. 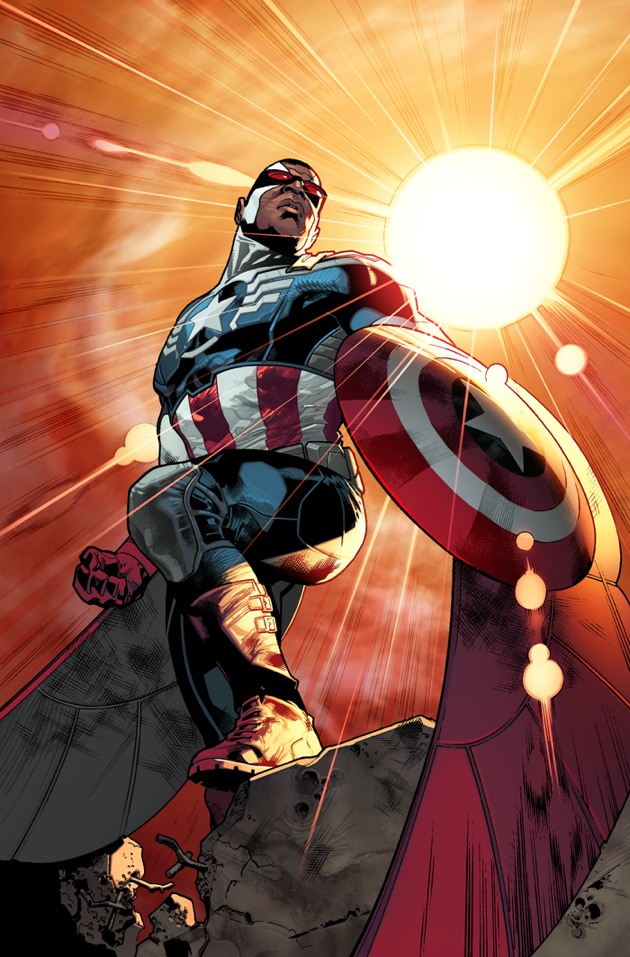 In his time as Captain America, Sam has been inverted, sent to alternate worlds, and worked with various teams. He has still maintained many of the attributes that make him a vital Black character in comics throughout this process, showing that he had the spirit of heroism inherent within him long before he wore the stars and stripes. Such an image puts forth the idea that Blackness can hold the essence of America, too. While we commonly say we are a melting pot, this belief is rarely put into action, erroneously supporting the idea that people of color cannot be representative of America. Yet, we are. While there are many themes to address in what we define as the American spirit, Sam as an avatar of this ideal subverts common narratives that place Whiteness as the center of progress, success, and patriotism.

From his criminal “history” to his role with the Avengers, Sam’s importance is underlined by his sense of heroism and honor. There are many parts of his history worth exploring in the context of Black men today, including what it means to have committed crimes and reformed, as well as the pressure of being a high profile Black man in a White-framed society. These narratives bring a realness to the existence of Blackness in America and help us process complicated feelings. Sam is valuable because he represents the power of choice when it feels like there are none, of taking your history and choosing to do something with it that affirms what you want for yourself. While some barriers are firmly cemented in front of Black men and people as a whole, having a representation of the possibility of autonomy may help to expand people’s conceptions about who they are and were and what they can do. 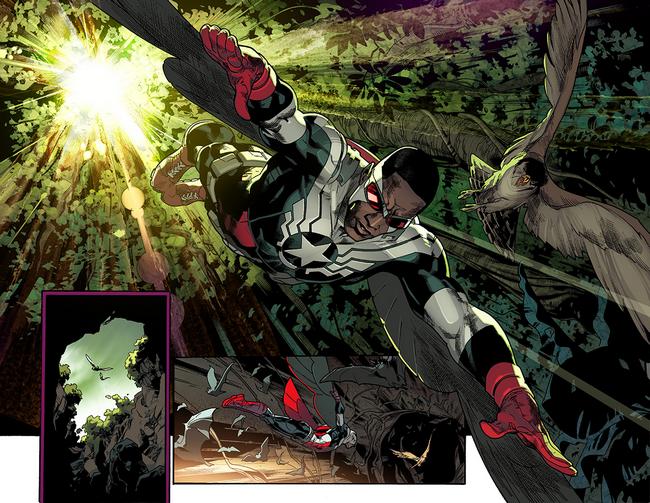 Sam also highlights the expectation of prominent Black people to always weigh in on racial issues. Now, I feel it is vastly important to discuss these things in light of a world where famous Black people have the economic privilege to somewhat ignore social injustice. However, I also feel it is important to address the fact that not all Black people have to have an opinion on Black issues and we don’t have to constantly chime in on racial matters. We know racism and institutional oppression exists regardless of our comments on it, but the White expectation that Black people must always have an answer for racial questions or be willing to address them is grounded in a reductive understanding of Blackness. We deserve the opportunity to just be, not to always have to provide a racial narrative or analysis of the world around us. Not everyone has or wants to be an activist, though that is often how we are treated, especially when racial tensions come to the forefront of our attention. 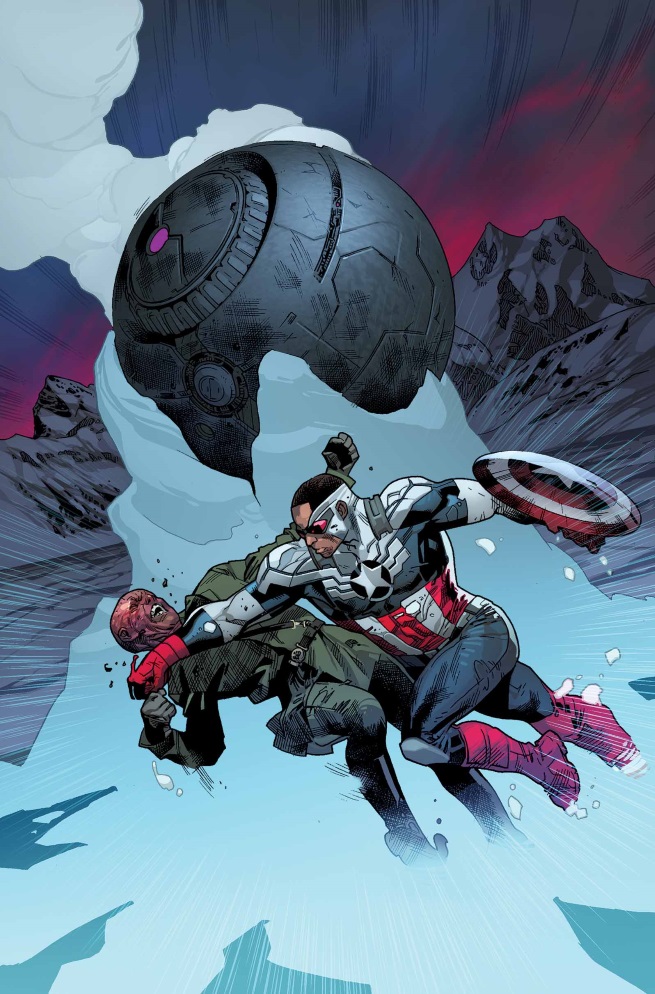 While Sam’s tenure as Falcon is well-known to many True Believers, or even casual consumers of Avengers animation, he still didn’t have near the prominence he does now. He has a great background that is reflective of the dark places we visit out of trauma, but also our capacity for rising above them. Even though the Red Skull was behind Sam’s first foray into heroism, Sam still made the choice to be the person he wanted and found a way to manage the pressure and folly of his past. At every point in his history, Sam made choices, eventually leading him to being Captain America. Recognizing these facets of him helps to see Sam as a person, a fallible human, who found a way to do things right for himself, his friends, and the world he protects.

What are your thoughts on Sam Wilson as the Falcon and as Captain America? What else do you feel is valuable about his narrative? Share your thoughts with me on Twitter at @80Grey and check out the rest of the Representation and Health Black History Spectacular as we come to a close!