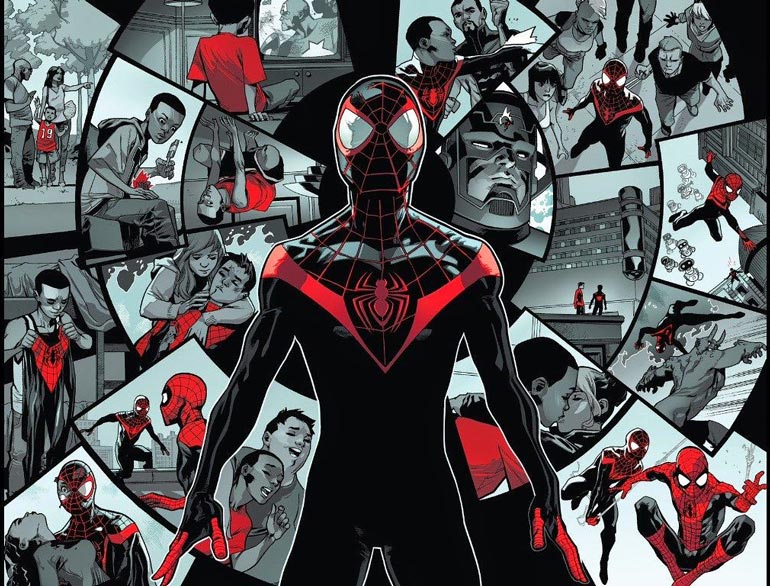 Today is a special day for a couple of reasons. First, it’s Day Three of the Representation and Health Black History Spectacular. Second, a very significant Spider is getting a new series today and he happens to be the focus of this column. Let’s celebrate Miles Morales on his new #1 and dive into why this Spider in particular is one of utmost importance. 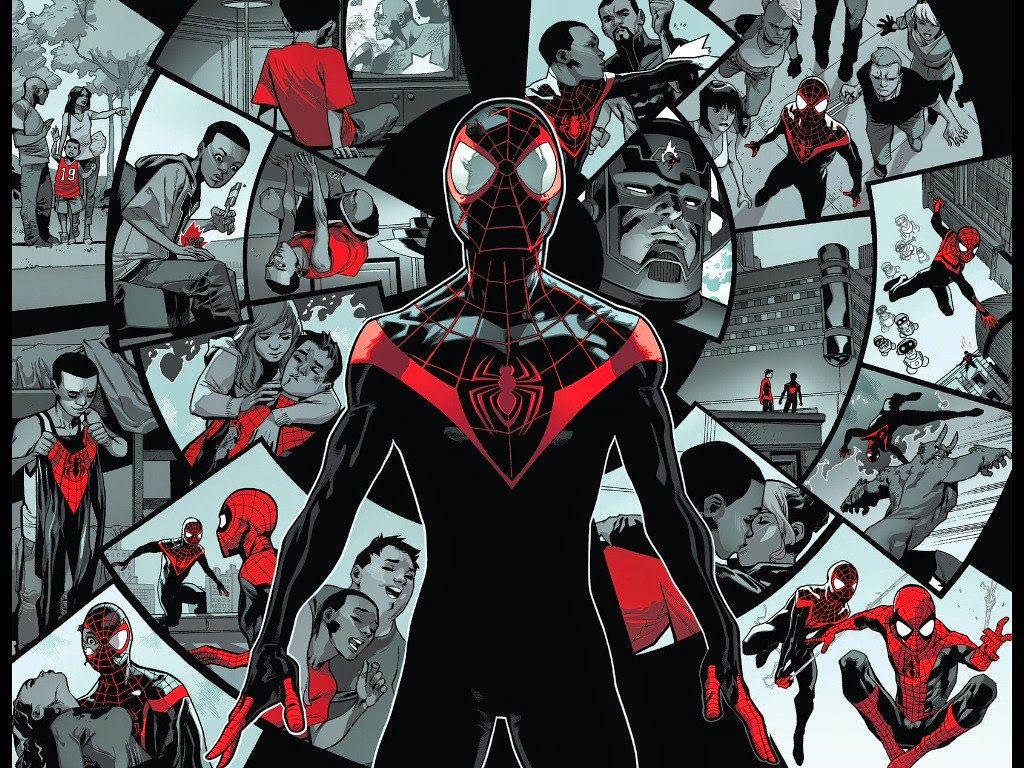 Miles makes his first appearance in Ultimate Fallout #4, filling New York City’s Spider void as he took up the mantle of Spider-Man within his own series, Ultimate Comics Spider-Man. He’s adjusting to life as a charter student, a teenager, and a superhero as he deals with the manipulation of his uncle and the death of his mother.

From there, Miles is all over the Marvel universe, participating in the Cataclysm of the Ultimate universe as 616 Galactus crossed dimensional borders. He gets to meet the 616 Peter Parker and eventually his own universe’s resurrected Peter, later finding out about his father’s history and ultimately being present at the convergence of the 616 and 1610 worlds. Miles played a key role during Secret Wars, and one act in particular eases his transition to a post-Secret Wars world. You can now find him in the pages of All-New All-Different Avengers and his own title, releasing today! 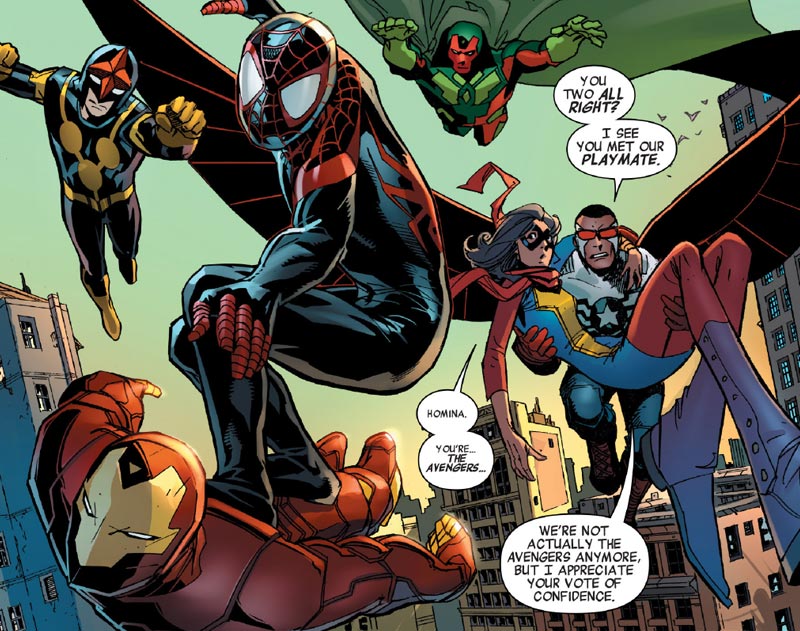 Since Miles #1 is coming out today, I decided to immerse myself in his story and wow did it deliver. He has so many redeeming qualities and struggles with pubescent and superhuman challenges, enough to make anyone buckle. Yet, through Miles’ own shining qualities, he manages to come out on top and prove to the world he deserves the web shooters. These heroic qualities are part of what makes him a great character, but he also enhances representation because of his identity.

Miles’ identity as Afro-Latino is important for a couple of reasons. In America, Black is typically seen as African and African American, while Blackness extends far beyond these national borders and exists in beautiful variety within them. Many people who are Afro-Latinx and Native are often left out of our conversations of Blackness. People who hold these identities deserve shine and parts of their narrative may not be present if we only examine things through the lens of a generalized or American perspective. While we all have unique and overlapping issues, we need to move to a point where we fully examine Blackness as a whole but also its very specific components and communities.

Having Miles as a Spider-Man helps to change the face of one of the world’s most recognizable heroes and challenges narratives regarding Blackness. Creating Miles was a bold move and it has luckily paid off. While there may have been a lamentation for some that “everyone’s” favorite White Spidey was now Black, Miles has been accepted into loving hearts and hands and he’s managed to stick around since his first showed up. I’m glad that Marvel has been dedicated to this kid, as he deserves that and more. Miles truly is a stellar character and exemplifies some of the best parts of a superhero. 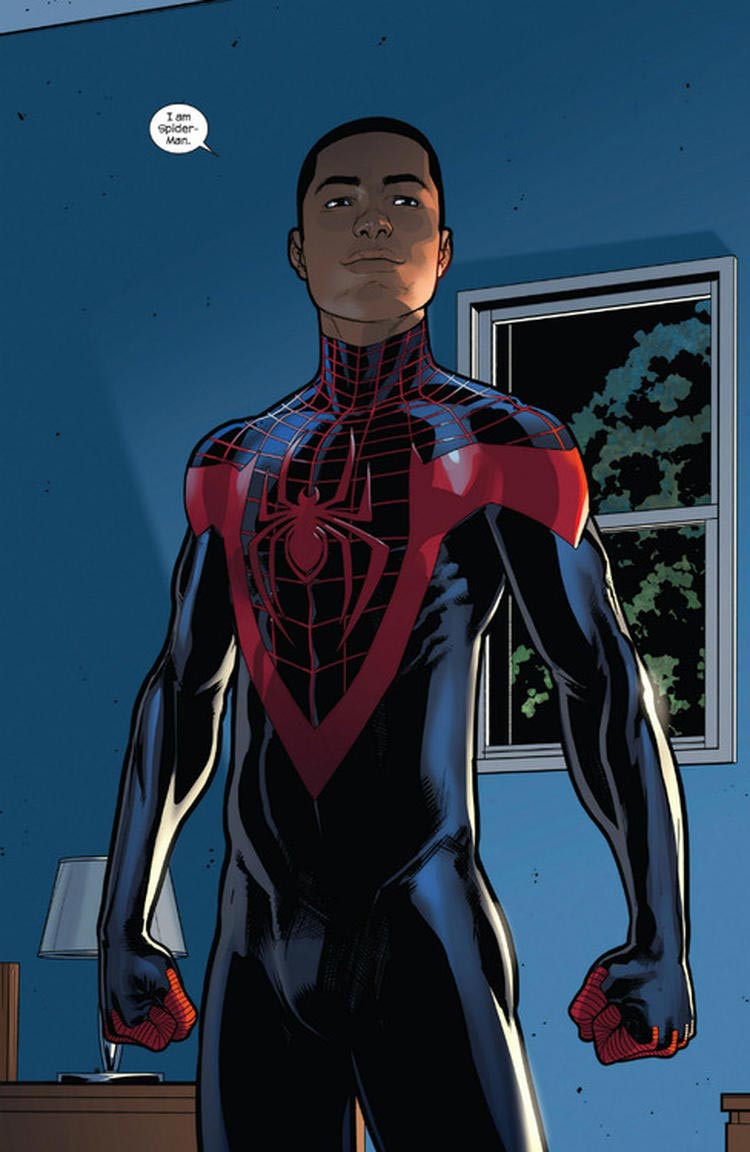 It’s not just his race and ethnicity that are important. Miles also gives young Black boys a chance to see themselves as a hero. He manages his personal challenges in ways that are difficult, but that fit who he is. He’s not one to back down or let himself be used, as evidenced by his history with his uncle, the Prowler of the Ultimate universe. Miles’ moral compass is fitting considering his family background. Both his father and his uncle were involved in organized crime, albeit under different circumstances. When you consider things as simple as median income and rates of poverty for Black families compared to White families, sometimes crime is a much more viable option than education. Gangs in particular may provide options that people may not see for themselves for a number of reasons, including education and resources. To some degree, Miles’ father and uncle’s decisions make a lot of sense, even if we aren’t fully privy to their background.

Despite this history, Miles’ parents raised him to be someone of integrity, as they didn’t want him to pursue the life his father and uncle had, regardless of intentions. This, combined with Miles’ mother’s compassion, lead to a young man who had a strong drive to help others, but also found himself conflicted as he became a superhero. Still, it’s evident very early on that Miles isn’t one to sit well with inaction and definitely not crime. 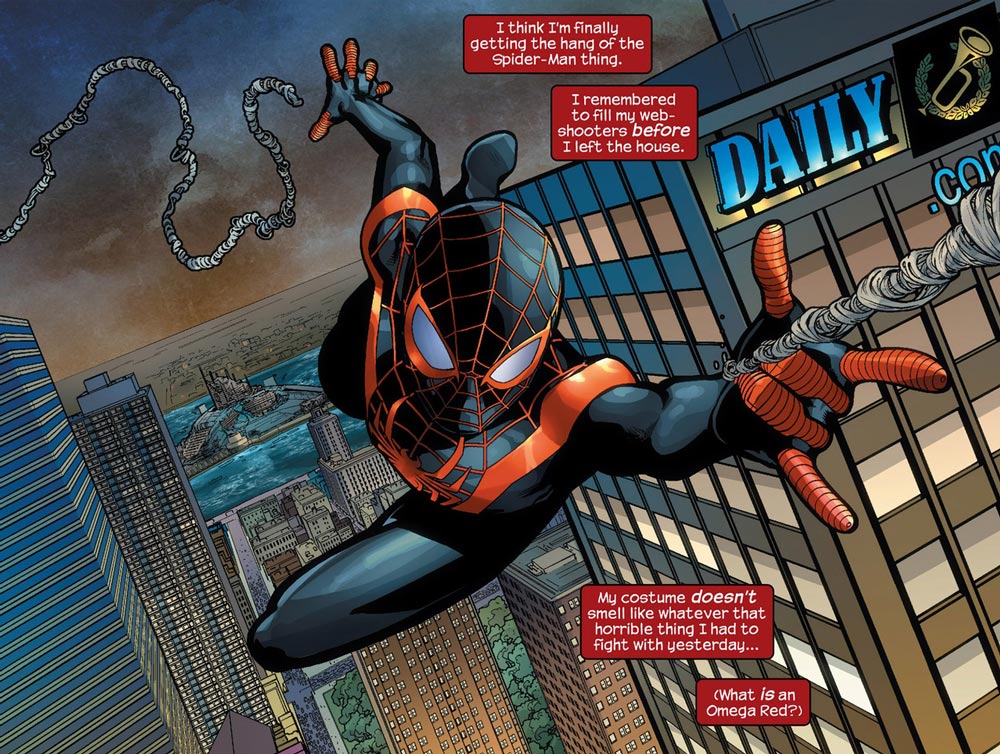 Through the loss of his mother, Miles also expertly demonstrates the frustration of grief and how to cope. His decision to hang up his webs came out of his profound sadness, something that may resonate with many people. While he took a hiatus from webslinging, Miles eventually came back, managing to put his anger and grief into perspective as he fought Roxxon and joined the new team of Ultimates. Such portrayals help to humanize the struggles of young people, and in a world where young Black men are instantly seen as criminals or aggressive, Miles is a vital part of putting their pain into perspective. Through him, young Black men may have a chance to process emotions that they may not feel they can openly.

Miles is a monumental character for so many reasons, and that’s evident in his stories but also the experiences of fans who love him. By enhancing conversations of Blackness to include Afro-Latinos, processing grief, and making difficult decisions in a difficult world, Miles creates a narrative that doesn’t pathologize young Black boys. Instead, they get to see themselves as someone who has very real struggles and who manages to overcome them, someone who is smart and capable even in the face of adversity.

How do you feel about Miles and his role as Spider-Man? What other value do you see in him and his stories that I didn’t cover? Let me know at @80Grey on Twitter!