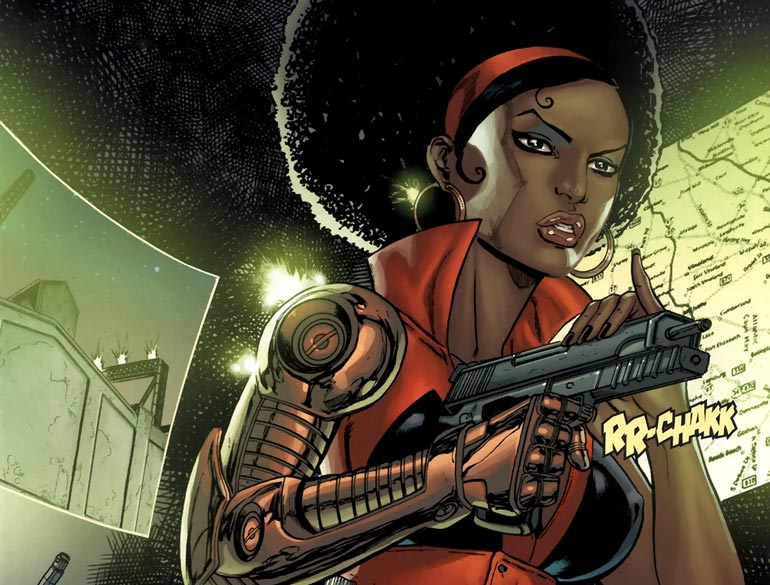 Happy Friday and welcome again to the Representation and Health Black History Spectacular! I recently covered a Marvel leading man who teams up with his best bud in a new series, and today we’re going to highlight one of their most famous friends.

She was a police officer who lost her arm in an accident, but was able to have it replaced with a bionic prosthetic due to the help of Tony Stark. A Daughter of the Dragon, she has been part of the Heroes for Hire, Fearless Defenders, and has been around for over 40 years helping to clean the streets of the Marvel universe. I present to you, the rather literally ass-kicking Misty Knight! 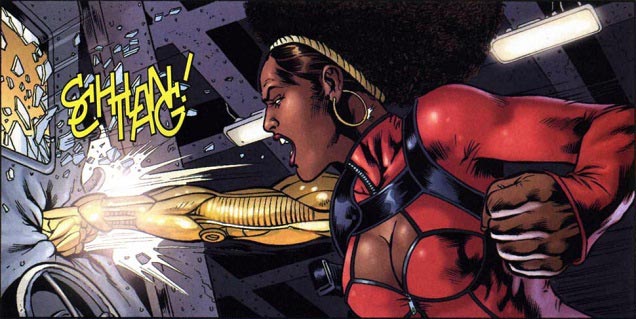 Misty revealed in Marvel Team-Up #64 that she had actually shown up for the first time in 1972 being saved by Spider-Man and Human Torch in Marvel Team-Up #1. After connecting with her best friend Colleen Wing in the pages of Deadly Hands of Kung-Fu, Misty would establish ties to many of Marvel’s most prolific characters and teams.

She eventually began an on-off again relationship with Danny Rand, the Iron Fist, and once roomed with Jean Grey. She would go on to work with the likes of the X-Men and many other heroes. During Civil War, Misty started her own branch of Heroes for Hire and was never afraid to tell Tony about himself, especially after the death of Goliath, Bill Foster. From here, she’d play a role in World War Hulk, Shadowland, and eventually become a member of the team Fearless Defenders. 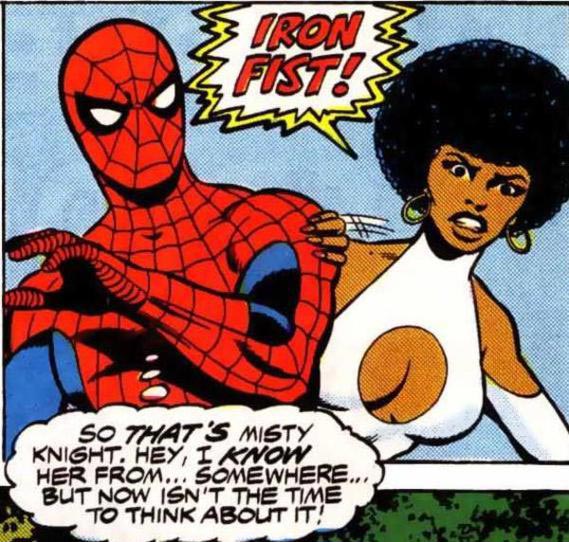 Misty is as no-nonsense as they come. She is more than willing to stand up for herself and assert her views. As in her interactions during the Civil War run of Heroes for Hire, Misty makes it apparent to Tony that she is willing to help with the Superhuman Registration Act, but purely on her terms. She also makes it abundantly clear when the Thor robot killed Bill Foster that the SRA may seem innocuous to Tony, but it is an analog for the oppression of a marginalized group of people through “good intention.” In this series, Misty takes an awesome middle road approach, recognizing the utility of the Act but also its inevitable turn toward subjugation.

What Misty represents is an extremely small subset of Black disabled people in comics. As an amputee, Misty is one of the few Black disabled characters in comics. Though people like John Stewart were wheelchair bound temporarily, Misty’s disability is permanent. She uses a bionic arm with some astounding capabilities. While in Misty’s case a metal arm with a stun function is not quite the same as a walker, she does in some ways speak to the use of assistive devices for mobility or sensory functions. Such a portrayal is important, in particular because Misty is a well-known character among readers and the superhero community within universe. 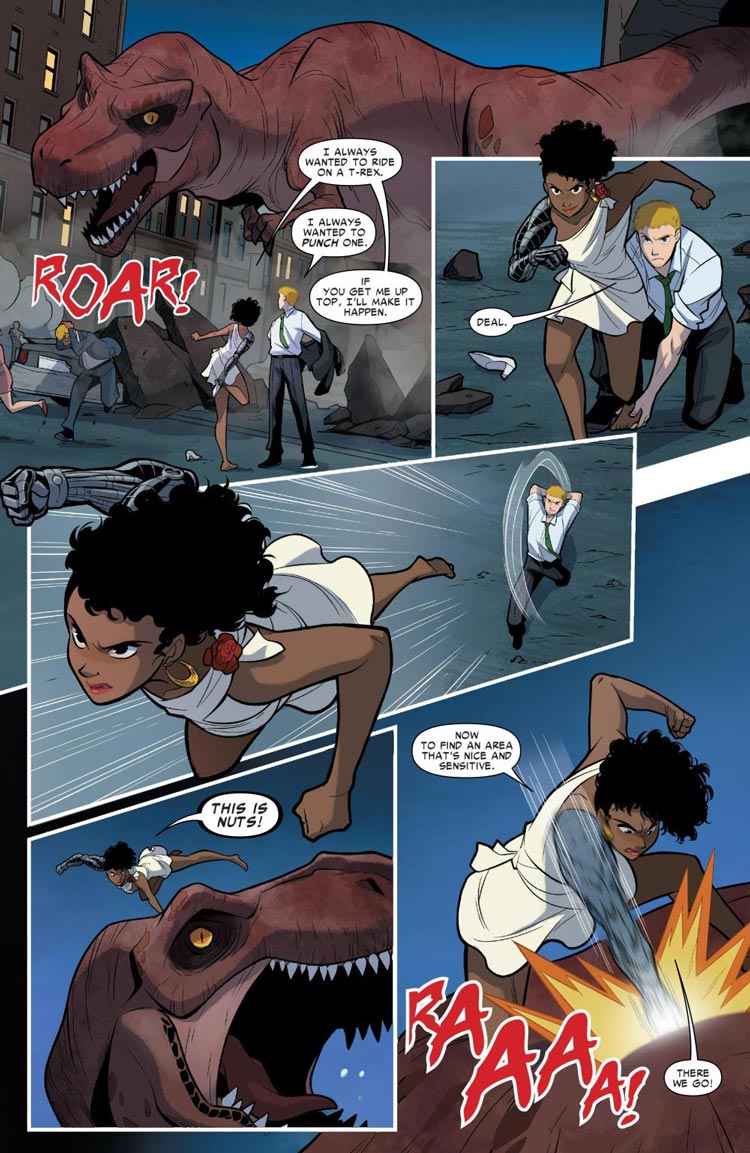 Let’s think for a moment about median income in America, a simple statistic that can be helpful for framing economic issues. Well, median income for all families in America is $53,657, while for Black families it is $35,398. Then consider the financial aspect of having a disability, including childcare, education and living resources, health maintenance, etc. For Black families, there is often a disproportionate impact when a family member is disabled which typically involve a lack of or difficulty obtaining resources. Thus, to have a character like Misty is rather vital.

However, we also have to look at Misty’s resources and connections. Tony Stark made a bionic arm for her, assumedly for free. With her connections to other heroes, Misty may not face the same barriers as Black people with disabilities. So while she enhances representation for Black disabled people, in some ways I can see how her narrative is potentially unrelated. Yet, that’s the beauty of representation and the purpose of these articles: to dissect the portrayals of characters, address drawbacks, but also highlighting realism or symbolism in their characters. 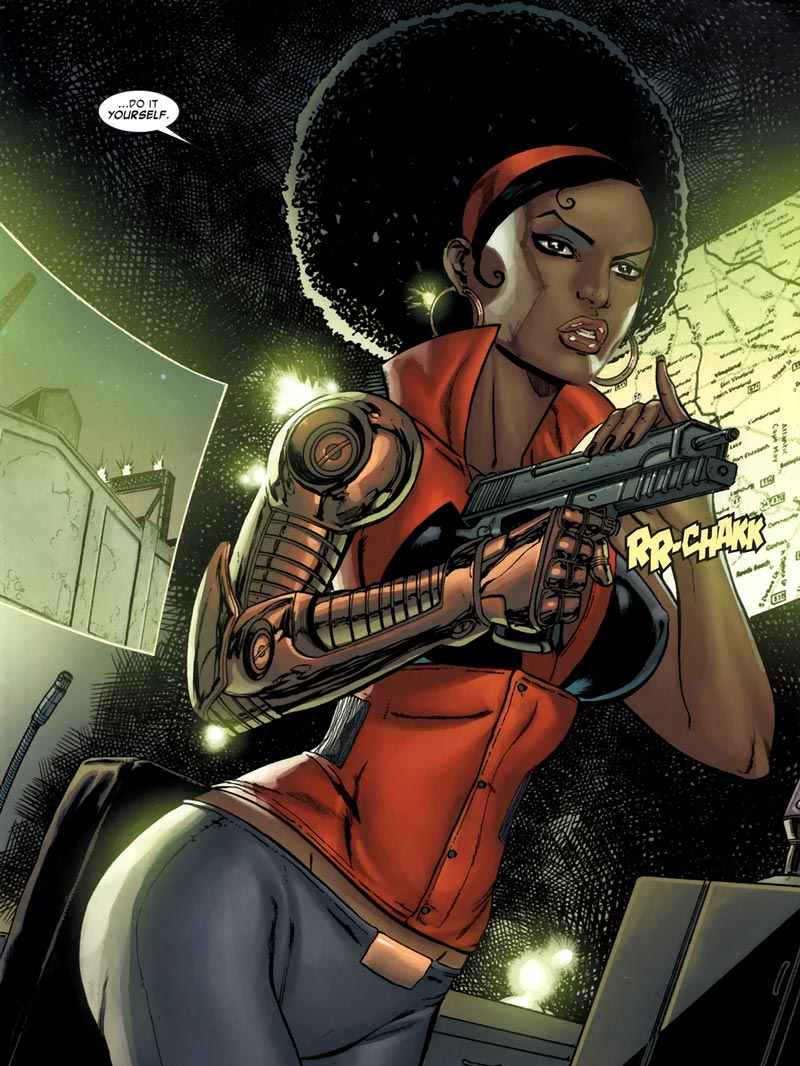 Misty is drawn visibly with her bionic arm. It’s not covered by prosthetic skin, not made to blend in with her body. It is apparent. As in the case of Blue Ear, a superhero with a visible auditory assistive device, Misty could potentially embolden people who have to make use of prosthetics, hopefully enhancing or building a sense of confidence in using assistive devices. With evolving medical technology, prosthetics are beginning to have similar functions as Misty’s arm, sans stun gun. To see someone running the streets, fighting supervillains, and hanging with Norse super beings, and making use of an assistive device could be a powerful image for many people.

Within Misty’s narrative, there’s an opportunity to see her and feel more assured, but also to address the experience of using assistive devices. I can see how she would help someone feel more at ease, especially if the disability occurred later in life, as in the case of Misty’s amputated arm. I can also see how it could lead to someone feeling disheartened that Misty’s bionic arm does not truly reflect what it’s like to be Black and use assistive devices or have difficulty obtaining them and getting new ones. Regardless, it seems as though Misty has a rife emotional narrative that runs through her and is waiting to be unpacked, and I’d love to see more about her in relation to her disability. 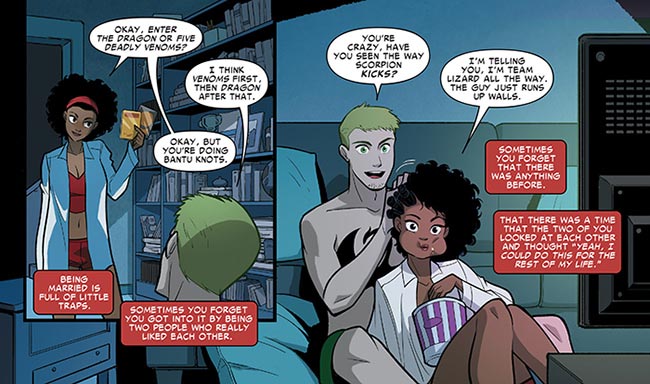 In an interview with Black Girl Nerds, Jeremy Whitley (@jrome 58), who did a story for Secret Wars: Secret Love about Misty and Danny with Gurihiru (@Gurihiru), discussed his perspective on creating a sense of realism around Misty. He wanted her to be seen as a real, disabled Black woman who sometimes has reservations about her arm. He wanted her to be seen without her arm, which I’m not sure happens often in her mainstream appearances.

Whitley’s approach is important, as it helps us remember that even in a world with superpowered beings, not everything is honky dory. Sometimes, I bet Misty may experience real difficulties with her arm. This does not mean that being disabled is inherently tied to distress or discomfort, but that, realistically, having a “large, bulky, metal arm” as Whitley puts it is likely going to lead to some kind of awkwardness at some point. I’m not sure such a thing is fully explored with Misty.

As with any other marginalized character, Misty should not have the weight of ALL Black disabled people or characters on her shoulders. For this reason alone, we need more characters who are Black and disabled in different ways, and in ways that are not instantly or quickly remedied. Having someone who is visibly and actively disabled is not a bad thing, though, also drawing from Whitley, sometimes this is how comics treat disability, “as something to be fixed.” 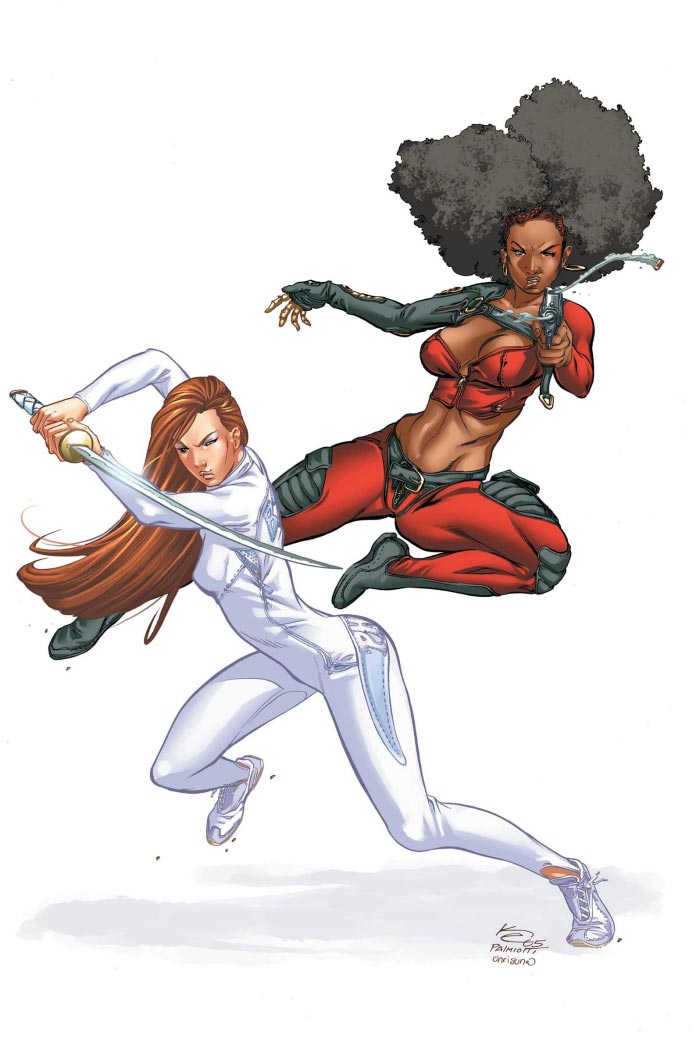 I’m glad that Misty exists because I like her as a confident, emotive, and compassionate Black woman, but also because she helps enhance disability representation in comics and creates a powerful jumping point to discuss the portrayal of disability in comics.

How do you feel about Misty Knight? What does it mean to you to have someone like Misty represent Black disabled people? Hit me up on Twitter at @80Grey and check out the rest of Representation and Health 101!