Northstar and Kyle. Grace and Anissa. Karolina and Xavin. Sometimes comics gets things right and these three couples are some good examples. Representation of sexual orientation in comics is still pretty sparse, but we have some shining examples of how to show love between people who aren’t heterosexual. There are also some significant strides to show people who are non-heterosexual and aren’t lesbian, gay, or bisexual.

Asexual, polysexual, and pansexual people exist, and we don’t have great examples, if any, of comic characters who hold these identities, though arguments could be made for some. By changing narratives for people who are non-heterosexual, we provide a chance for them to see themselves and explore who they are. 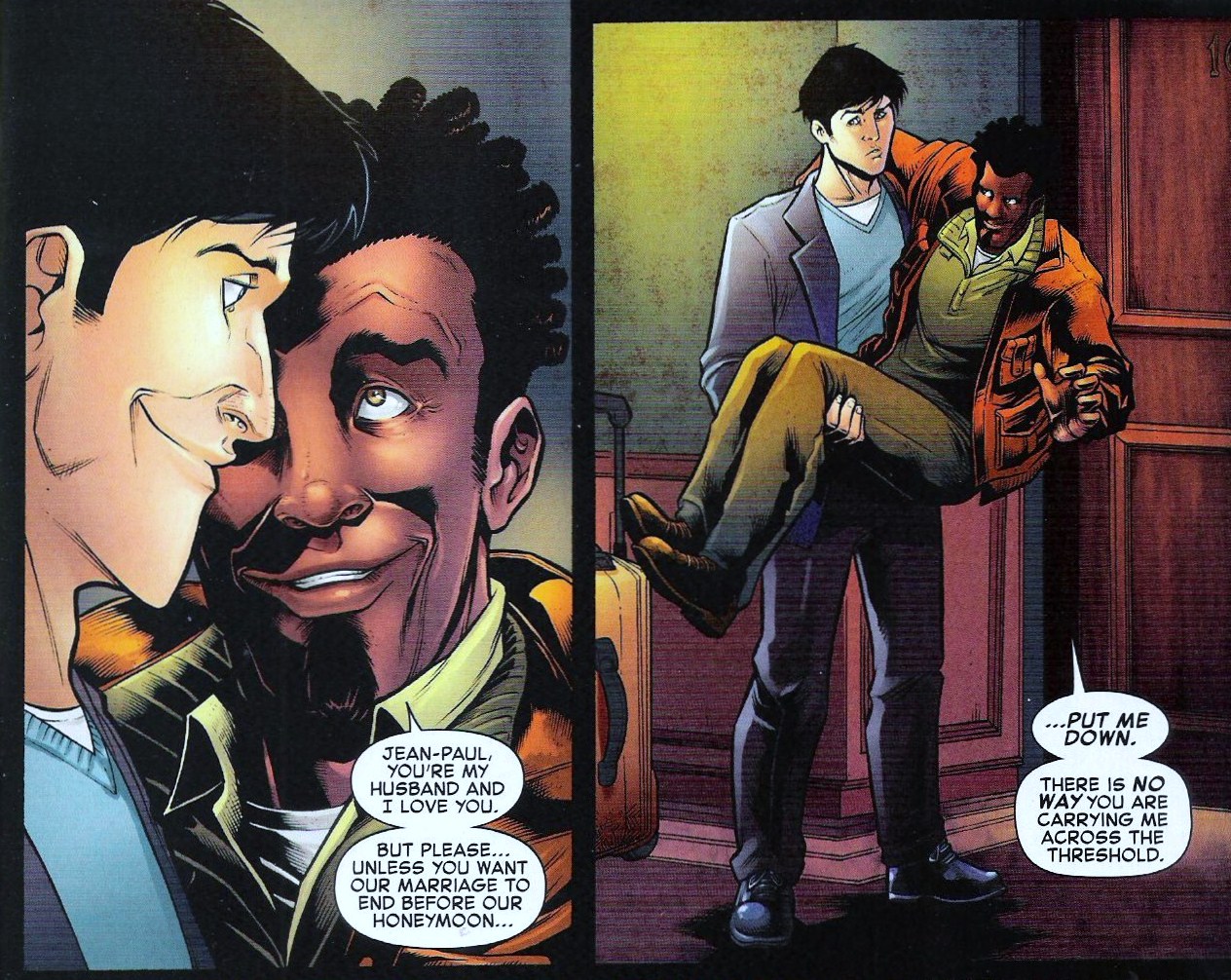 If I haven’t already mentioned it, bibliotherapy — the use of media to promote healing and change — provides a chance for safe self-exploration and problem solving. And you’ll probably see me talk about it again. Where it becomes applicable for this conversation is by addressing what it’s like to not be heterosexual and search for ways to examine who you are outside of a heteronormative society and framework. When we have more characters who are non-heterosexual, in the many ways the identity can show up, we give people a chance to alter and define their worlds beyond being attracted to another gender.

When I got into comics, I barely had a conception of non-heterosexual characters. I really just looked for ones I knew. Yet, when I look back, I can only imagine what it would have been like for me to have Wiccan or Northstar in my corner coming out. It could have made that somewhat tumultuous time of my life much easier considering my love for super-heroes. Having characters like the Runaways, Wiccan and Hulkling, Batwoman, and now Catwoman can make the difference between someone finding power in a budding identity and feeling lost. 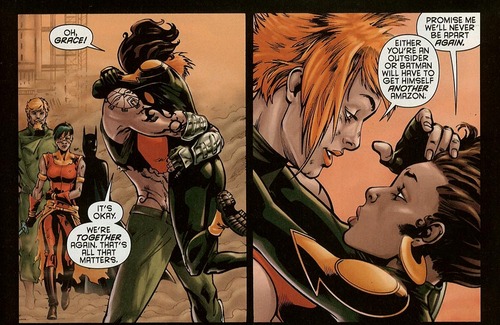 Media is one of the many pieces of shaping common perception and knowledge of marginalized groups. You will probably read about the place of comics in shaping narratives until you, or more likely I, are blue in the face. Yet, new characters who are non-heterosexual can play an amazing role in not just helping people like us discover how they relate to others romantically, physically, and sexually, or not depending on who we are. Seeing ourselves normalizes our experiences, which are so typically painted as deviant, abnormal, or any other word you’ve probably heard in relation to your own sexual orientation if you aren’t heterosexual.

Having a relatively tangible representation of ourselves can often help us develop a healthy and positive sense of self. When these images are absent, sometimes it’s hard to know how to develop who you are. When you look at health disparities for people who are non-heterosexual, the situation becomes rather critical, and representation in comics can be a very quick, efficient, and accessible way to help us better understand ourselves and our health. Addressing issues such as oppression and sexual health can be easily done within the pages of a comic, providing a guide to how to address these issues, especially if we feel we do not have the support of important people in our lives, a circumstance that is more common than it should be for people who are non-heterosexual. 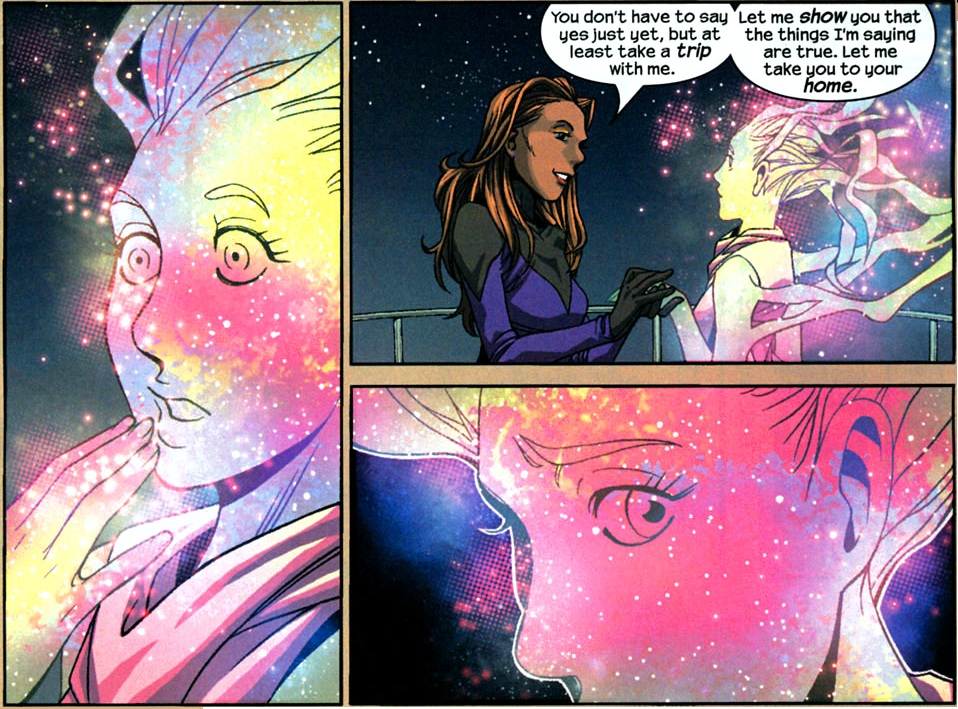 At the same time, though, we do not need to shy away from showing healthy sexuality in comics for nonheterosexual people. Sometimes relationships are painted as rather tame, leaving out the sex part, even though it’s not uncommon at all to show heterosexual people in sexual contexts. So, basically, representation of non-heterosexual people needs to show us in love and having sex, but also just living everyday lives and not just tied to romance or bedroom escapades.

One major step to make is showing people who are non-heterosexual beyond lesbian and gay. So much of narrative about sexuality is seen in significantly limited terms. When someone is revealed as bisexual, maybe they should also indicate that in their behaviors and feelings and not just pursuing different gender relationships. Catwoman is a great example of a character revealed as bisexual who actually has a relationship with a woman, rather than just using her bisexuality to make her more “sexy,” a move that is unfortunately common for bisexual women in media.

From this point, we need to move to showcase more asexual, polysexual, and pansexual people. This form of progress also means showing people who are of different genders beyond the binary, which is an issue I’ll address in the future. To fully showcase the full, complex, and intricate range of sexual orientation, comics need to find ways to incorporate diverse narratives that aren’t restricted to just “straight or gay”, which seems to be the current state of affairs with very few exceptions. 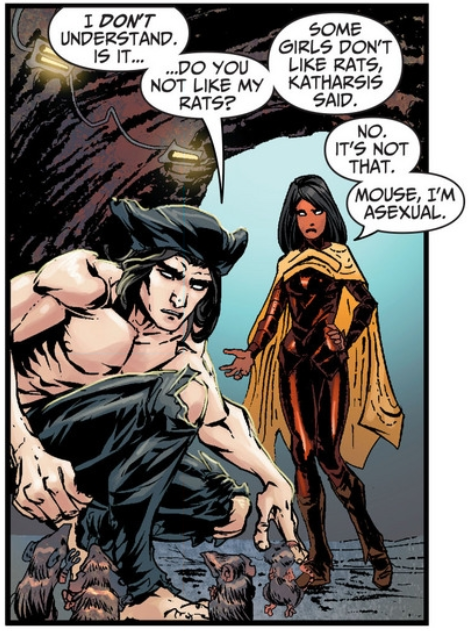 When talking about non-heterosexual sexual orientation in comics, I think it’s incredibly important to bring in diverse writers and artists. Even addressing these issues, I know that I may miss things when it comes to talking about identities beyond my being gay. Research is an important part of getting close to the mark, but we also need people who fit these identities to craft stories. This process doesn’t have to be either/or; we can benefit from a lot of people writing diverse narratives about sexual orientation, but we do still need to make sure we are getting the stories as right as possible.

Imagine the power these stories could have for kids or even adults, who are gay or lesbian, bisexual, asexual, polysexual, or pansexual? What it means to be treated as “normal”, especially when even people who aren’t heterosexual can enact oppressive languages or actions against others in the community, such as the biphobia exacerbated by gay men and lesbians.

Who are some asexual, polysexual, or pansexual characters you know of, whether Big Two or otherwise? What else should be added to this conversation about representing non-heterosexual identities in comics?