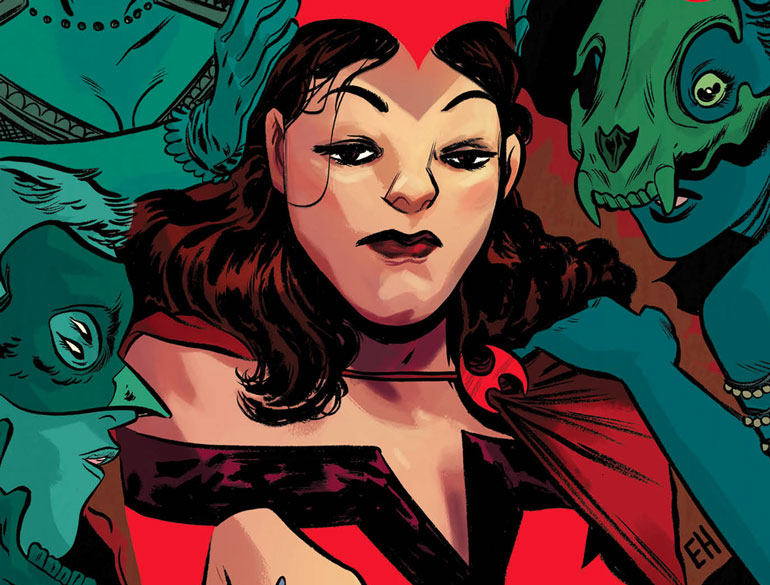 Hello and welcome to the latest installment of Representation and Health Character Studies! As you know, the editors of Comicosity got first pick at who they wanted to see in a column. Matt chose the amazing and intriguing Renee Montoya. And Aaron? He picked our crimson cowled magical mistress Wanda Maximoff, also known as the Scarlet Witch.

Wanda first appeared in the pages of X-Men #4 alongside her brother and ‘father’ as part of the Brotherhood of Evil Mutants. She would later go on to be a longstanding member of the Avengers, as well as its off-shoots: West Coast Avengers and Force Works. 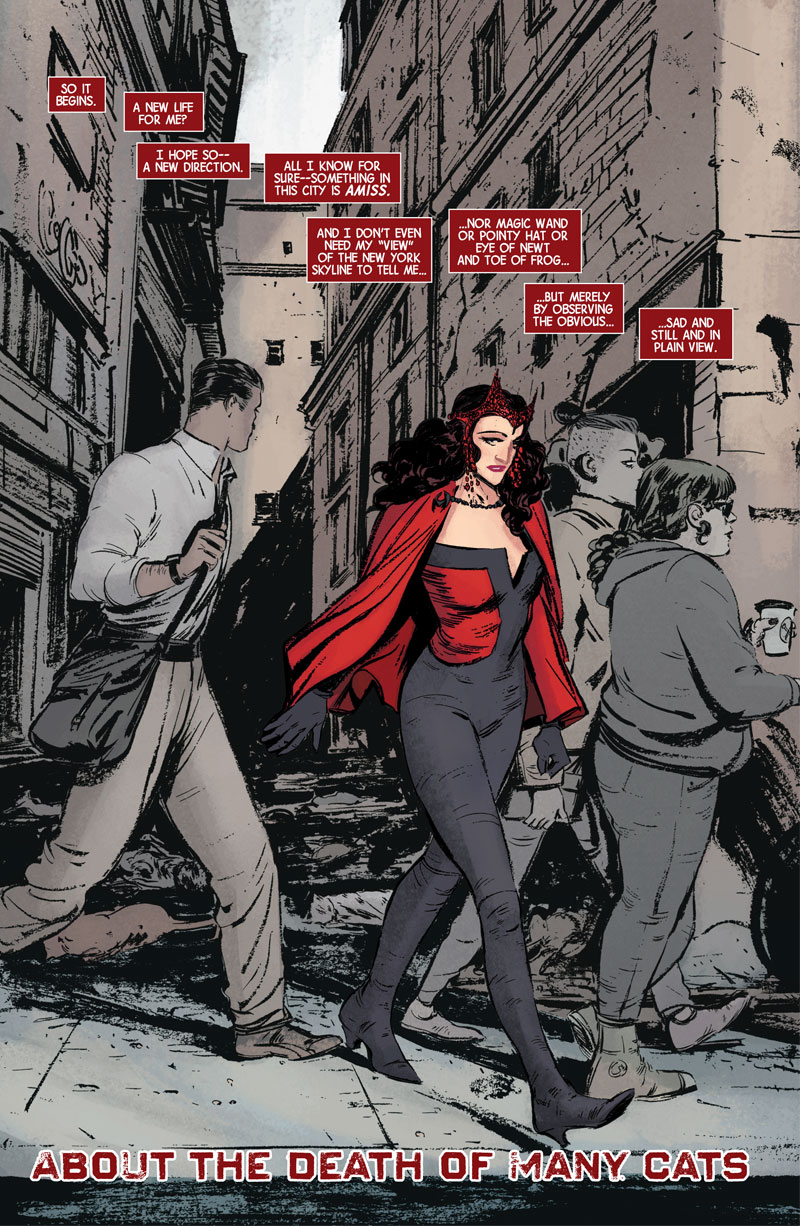 There’s a lot to unpack with Wanda, and for the good parts there are most certainly the parts that are less savory. For one, Wanda is Jewish and Romani, but is typically shown as racially and ethnically White-European. While story and writing can convey these elements, art also needs to follow suit, as Wanda’s heritage is not that often a part of her stories and thus those parts of her can get lost to continuity.

I feel that Wanda is easily white-washed in many of her stories, and that once we hear she’s European the argument quells because they’re all White, right? Not exactly. While the nuances of race and ethnicity change when we reach across the Atlantic, we don’t have to show all European characters as fair-skinned, just as we need to stop assuming Asian means East Asian.

Portraying Wanda as ethnically diverse would be a great move for comics. This part of her is not often explored except to explain where she comes from, retcons and all. I’ll admit, this critique of Wanda’s presentation in comics is relatively new to me, and I’m still coming to understand what it means for someone of her descent to be portrayed as simply White with a couple of nods to her heritage. While I’m not going to focus heavily on this aspect, I definitely encourage you to look up some of the cultural critiques regarding Wanda and her brother Pietro, aka Quicksilver. 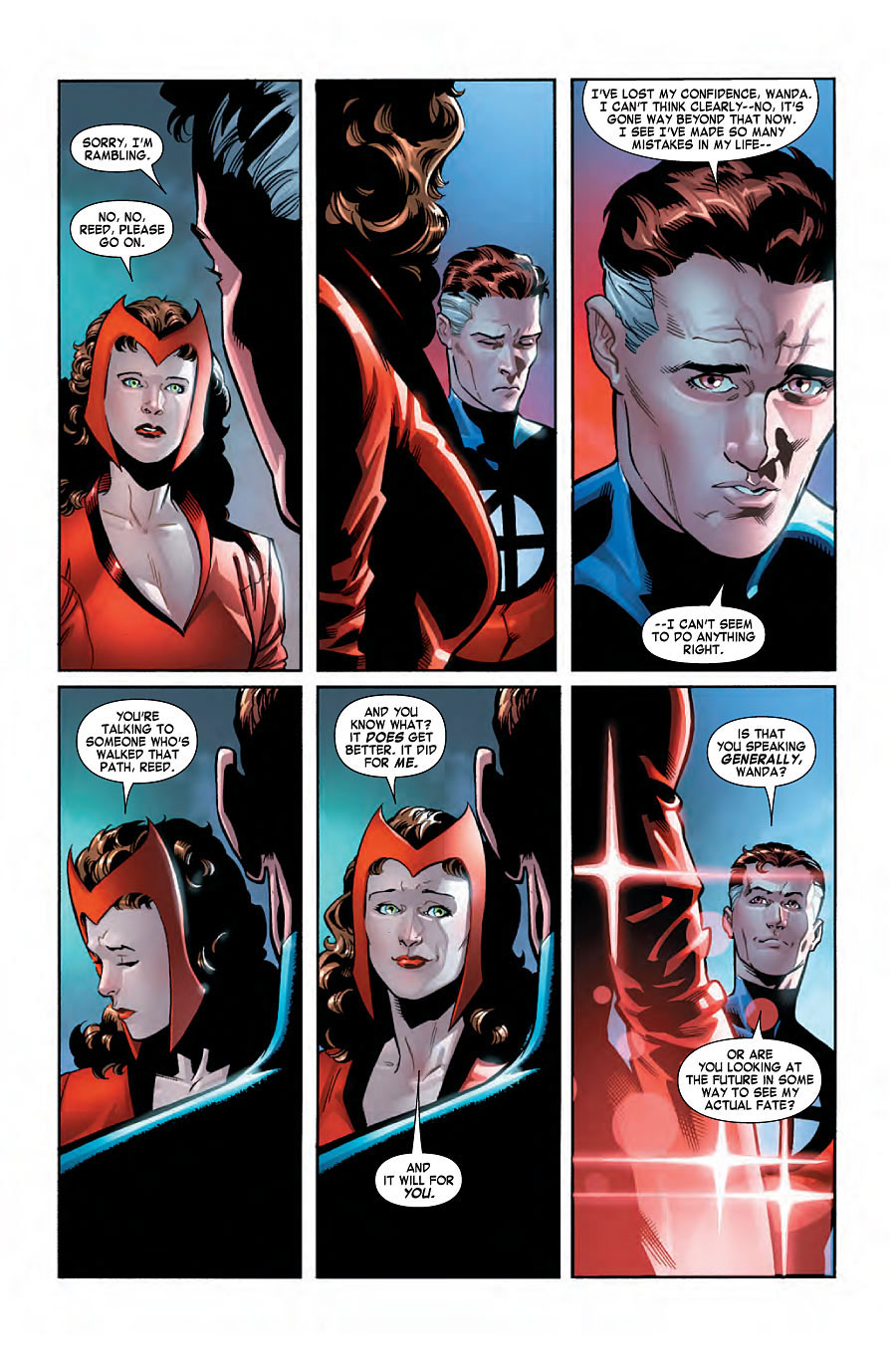 Second, she’s someone who is conveyed with mental illness, but conveying her as unstable can sometimes do more harm than good. It’s important to address all of these aspects when covering any character, as we must point out how they add to valuable representation but also how those aspects need to be done correctly.

If there’s a running theme among some Marvel women, it’s trauma, and that’s basically a story for an entirely different column. Regardless, Wanda’s life was tampered with in some of the most heartbreaking ways. She lost her kids and her husband, and her time with Magneto created a shaky emotional foundation. Much of her history was in defiance of these tragedies, but one story pushed Wanda to her limit and serves as a major example of Wanda representing many facets of mental health.

During Avengers Disassembled, Wanda’s abilities were the major key to the dissolution of the Avengers. She ‘orchestrated’ some major trials for the Avengers, including the deaths of Hawkeye and the Vision. In the aftermath of Disassembled, the Avengers disbanded, Wanda had depowered 90% of mutants, leading to Decimation, and she was nowhere to be found for years. 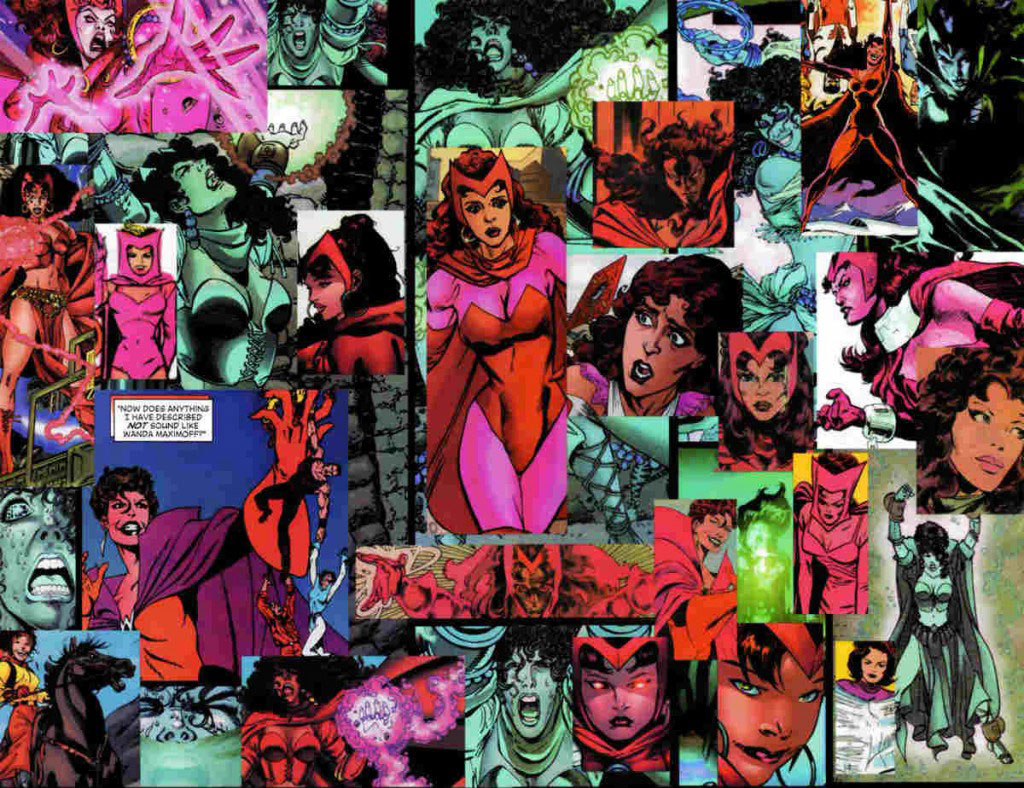 Wanda in Avengers Disassembled is a dual metaphor. First, this story exemplifies the drastic changes we can undergo when we face significant trauma. If you look back over the years, Wanda’s dealt with a lot. So, for someone who at the time gained the power of changing reality, the events of Disassembled are drastic, but somewhat realistic, especially considering her anger toward the Avengers. However, what this story also portrays is hyperbolic understanding of mental illness and the behavior of people with it.

A very, very small proportion of people with a mental illness are violent contrary to what the news media will have you believe (particularly after White men commit acts of terrorism). Also, the effects of mental illness are not so often external, as in creating chaos for others. More than likely, the person with the illness is struggling more than those outside of them, though this can lead to interpersonal issues for a variety of reasons.

For example, imagine the events of Disassembled within Wanda’s mind, rather than outside of her. Not all people with mental illness experience such strife, but it’s not uncommon for me to treat someone who feels as though their world is built on shaky foundation though nothing outside of them is truly in disarray. 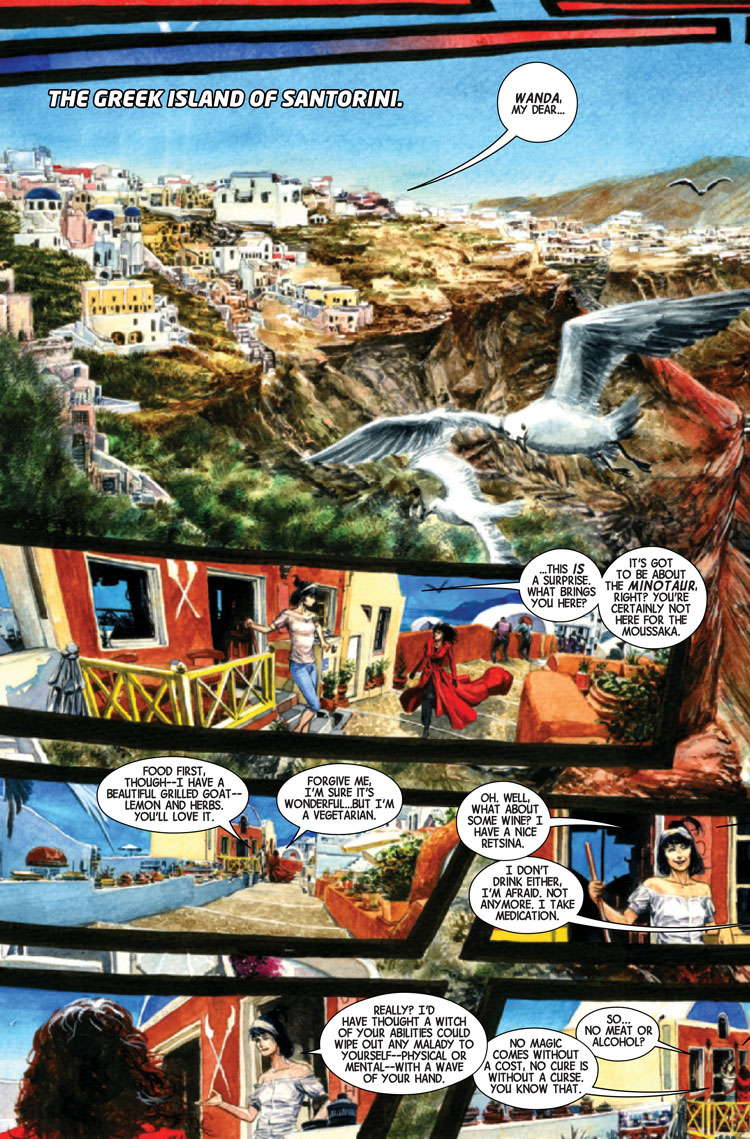 Let’s fast forward a bit to Scarlet Witch #2, in which Wanda reveals to Hekate that she doesn’t drink because she takes medication for depression. This scene was in one panel on one page, but it’s powerful for demonstrating that, at the very least, one of our heroes faces something many of us do.

For perspective, it’s estimated that 5-10% of people currently are diagnosed with Major Depressive Disorder, but many more experience at least one depressive episode over the course of their lives. To be diagnosed with a depressive episode, you have to demonstrate five of the following symptoms for two weeks with significant impairment: depressed mood most of your day; reduced pleasure from ordinarily enjoyable activities; significant change in weight or appetite; sleep issues; restlessness or lethargy; fatigue or low energy; feelings of worthlessness; issues with decisions, concentration, or memory; and/or thoughts of death or suicide.

It can be tricky to capture all of these symptoms within a comic when you have to tell a larger story, and Wanda may not showcase all of them, but that’s another important point. Mental illness, particularly depression, does not always look like we think it does. Depression may not be sadness; instead, it could be irritation or anger, particularly in men. Anxiety can often be invisible. Wanda doesn’t have to ‘look’ depressed to experience depression. The fact that those words are even written means that we don’t have to have any conjecture. I am ever grateful to James Robinson for writing that into Wanda’s current story.

I’ve already covered how we need to expand portrayals of mental illness in comics, and I hope we see more of that as Scarlet Witch continues. Wanda captures many parts of the narrative surrounding mental illness, from what is done right to things to avoid when writing characters with emotional issues. Just as the simple presence of Wanda saying she has depression is important, it also is vital in our everyday lives. 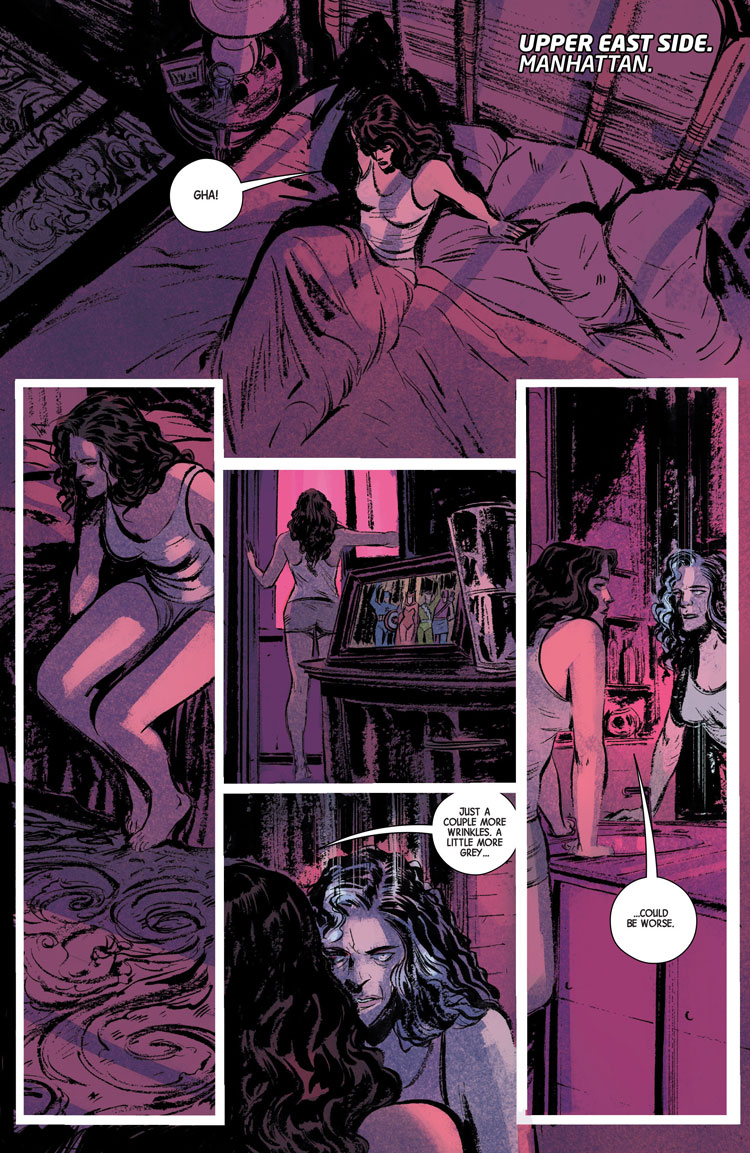 There’s still a stigma surrounding mental illness, and it’s not just a generational thing. Many young people hold beliefs about mental illness and health that are heavily stigmatized. We need to enhance the conversation and representation within comics, as they are easily accessible and can serve a very great function in helping people get better.

I encourage you to read Avengers Disassembled and Children’s Crusade, as they are two vital stories in Wanda’s history and where much of my contact with her comes from. What other stories do you recommend in getting to know Wanda better? What other thoughts do you have about her, particularly her heritage? Feel free to hit me up at @80Grey on Twitter and let me know what you think!