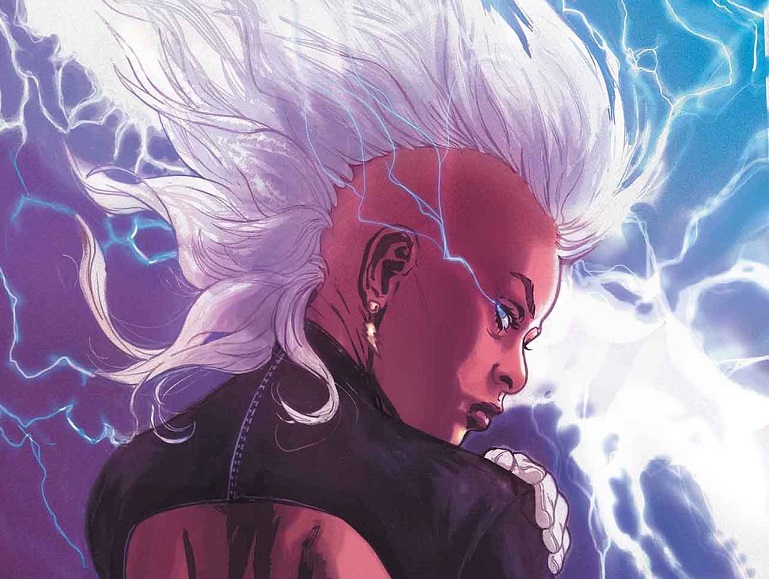 We have arrived at the penultimate Representation and Health Black History Spectacular! Looking back on this month, it’s been wonderful to analyze these characters and talk about why they’re important and why I love them. Today’s character is vital to the Marvel Universe and comics as a whole, and she is Marvel’s premiere Black woman. Long-time member and sometimes leader of the X-Men, Omega level mutant, former Queen of Wakanda, and generally a goddess, she has had a profound impact on many Black nerds and those she interacts with in comics. I present to you the regal, astounding, and extraordinary Storm, aka Ororo Munroe. 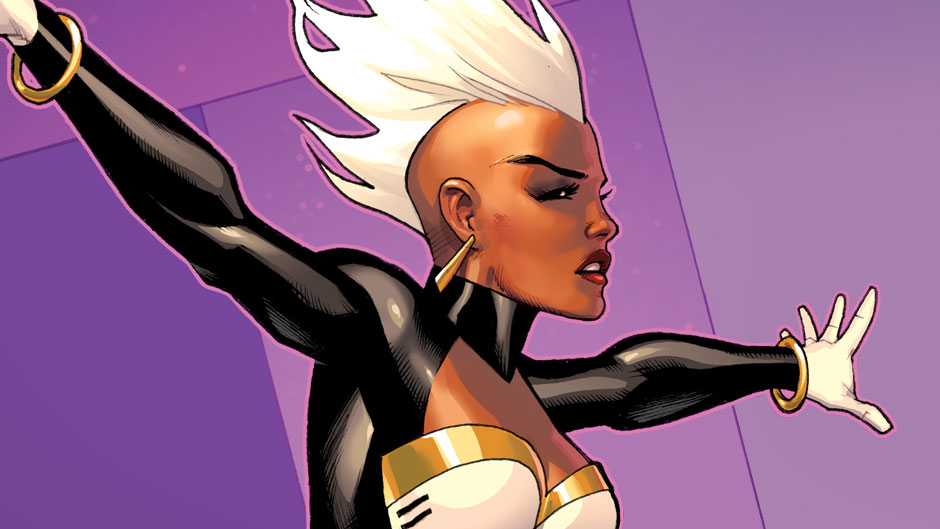 As part of a new team of X-Men sent to save the former team from Krakoa, Ororo debuts in Giant Size X-Men #1. As a young girl, she lived as a pickpocket before encountering Charles Xavier, after which she used her control over weather to help various tribes in Africa, eventually becoming revered as a goddess. Since joining the X-Men, she has seen a variety of conflicts, from the devastating battle with the Dark Phoenix to the menace of Onslaught. Storm’s accolades weren’t just with the X-Men. Through the years, she joined with the Fantastic Four briefly and has aided the Avengers on numerous occasions, making her a key figure in Marvel. She is now saving the world in the pages of Extraordinary X-Men as part of Marvel’s All-New All-Different lineup.

Ororo holds SO MANY valuable narratives within her. From mental illness and trauma to independence and autonomy, she is a great character through which to discuss some awesome themes. What I adore about Ororo is that she is an emotionally raw and evocative character. Through her we can examine the intimacy of a variety of relationships, but also the pain of experiencing trauma. Such parts of Ororo’s extensive history underscore her emotional depth and her importance for many readers.

What I like about Ororo is that she is powerful and respected. She gets better treatment than both Monica Rambeau, who has been on the sidelines for many years despite her abilities and her connections, and Mari McCabe, who’s proven herself to be more than capable but yet largely invisible. Ororo is rare in that she has a place in people’s minds unrivaled by other Black women. Such a reality is unfortunate in that she should not be the only one who has such a spotlight. However, her visibility is monumental in creating connections for readers and providing a wealth of stories from which to draw helpful narratives. 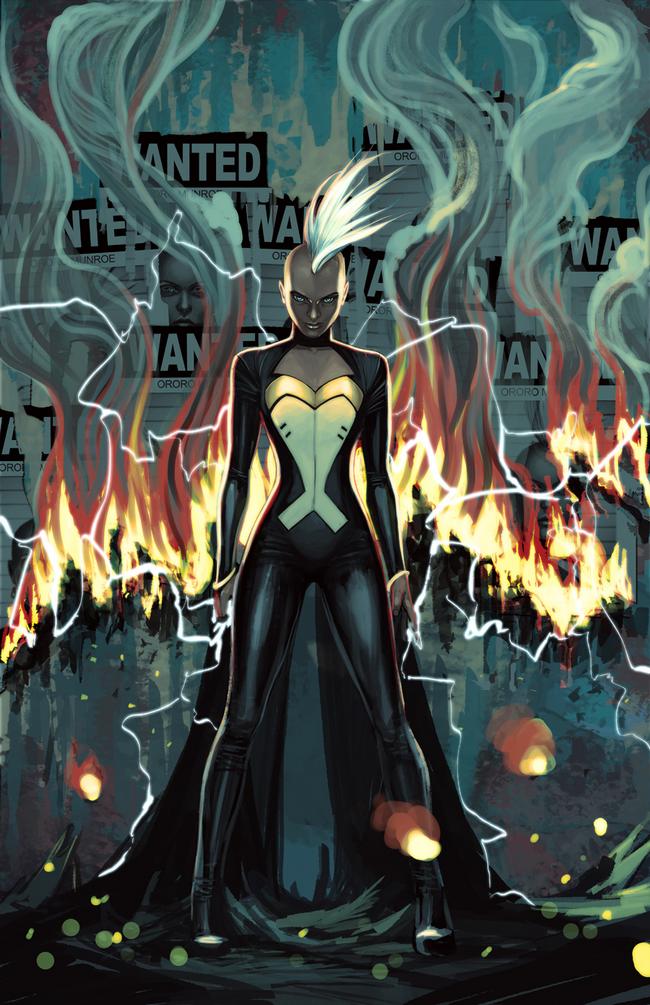 Because of her prominence and extensive history, Ororo helps to elucidate therapeutically pertinent issues from a wide range of stories. One of her recurring themes is her claustrophobia, a trauma response from being buried underneath rubble after her parents died in an airstrike. Consider that she responds to her trauma in different ways. For instance, in Uncanny X-Men #102 she’s crying, immobilized by her fear, while in Uncanny X-Men #147 she unleashes her fury. Normalizing these kinds of responses is an integral part of my work as a therapist because it is not just the trauma or the triggers. Sometimes, people feel guilty for their emotional reactions, and that’s an unfair pressure. This is just one example of how we benefit from Ororo’s presence and how she’s helpful in providing a safe avenue of exploring trauma.

Outside of her ability to handle challenges, Ororo is determined and courageous, whether she is empowered by her mutant abilities or not. Even when powerless, she is more than capable of being at the helm the X-Men. Her relationships with others feed into her prowess as a leader, as she is tender and emotive, recognizing how to use the bond between team members to achieve success in combat and strategy. Ororo provides an example of not just working under pressure, but also working with a team. The hosts of the podcast Rachel and Miles X-Plain the X-Men talk about Ororo as a leader with great depth and analysis and I HIGHLY suggest you give their show a listen.

Even away from the Danger Room or fights with evil mutants, her ability to form intimate connections with others portrays important facets of human connection. Whether through her love for Jean or her concern for Kitty, Ororo taps into a very human experience that seems to be rarely explored through Black characters. These relationships are some of my favorite parts of Ororo, and the first time I discovered them in reading 70s and 80s issues of Uncanny helped me realize that superheroes, especially Ororo, are more than their powers. She represents different aspects of being Black and diversifies narratives around Blackness. My hope is that more creators explore what it means to create an awesome and real Black character like we’ve had with Ororo. 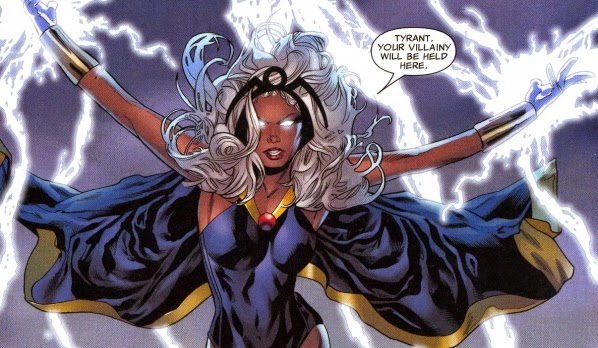 There are so few Black characters in comics who have been around as long as Ororo, let alone those who have been as involved as she has throughout her publication. Thus, we need more characters with her status to explore more diverse stories around Blackness, lest we place that onus on a small handful of characters. We also need to elevate extant Black characters in order to explore more stories through them, including intersecting identities, while refusing to let them drift to the margins. It’s awesome that Ororo captures some interesting narratives which have been explored with great depth, particularly under the pen of Chris Claremont. To enhance Black representation, though, other characters, whether new or old, need to get the Ororo treatment.

It’s hard for me to fully express why I think Ororo is important because I feel some of her value is unspoken, wordless. It’s rare for me to read a story with or about her that I don’t like. Ororo is a character whose power and abilities speak to me in a way that few others do. I can’t speak for all Black nerds, but I can imagine I’m not the only one. To see her in animated series, in comics, as a powerful, honorable, flawed and scared character speaks to a humanity we do not often get when it comes to Black characters.

Fellow Comicosity writer J. Skyler has a stellar analysis of Storm and her importance through the lens of LGBT experience. I highly recommend reading it, as the piece is thorough and evocative, capturing one of, if not THE, most prominent Black woman in comics through some of our lived experiences.

What are your thoughts about Ororo? In what ways is she an important character for you? Let me know on Twitter at @80Grey and read the rest of the Representation and Health Black History Spectacular as we wrap-up tomorrow!