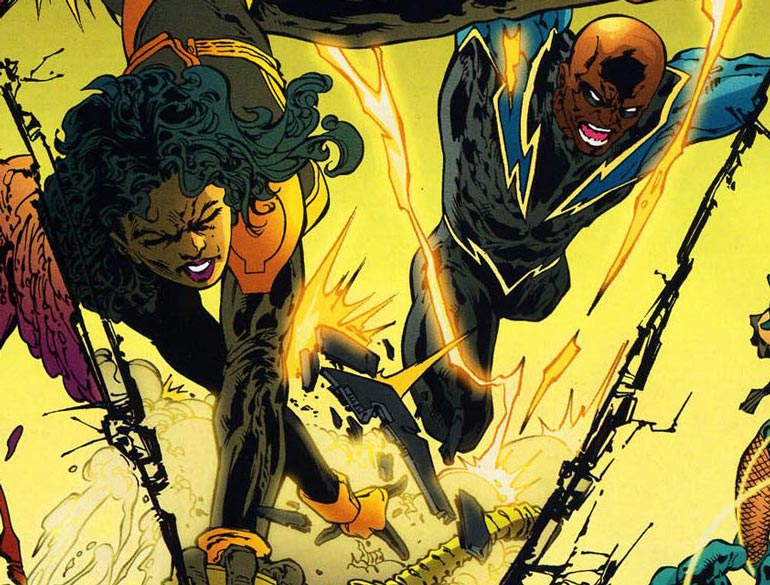 It’s time again for another Representation and Health Black History Spectacular! Today, I’m talking about someone who’s had my attention since I first discovered her. I mentioned her in my article on Black Firsts in comics, and there was no way I WASN’T going to highlight this amazing woman. She’s the daughter of Black Lightning and a member of the Outsiders, and she has a special role within DC Comics. I present to you: Anissa Pierce, aka Thunder!

Anissa first appeared in the third volume of Outsiders, recruited by Arsenal in an attempt to create a new team after the disbandment of the Teen Titans and previous Outsiders. Her first scene involves her protecting a bar owner from a group of thugs, giving her a chance to demonstrate her powers. She would continue to stay with the Outsiders through many conflicts both familial and intergalactic. 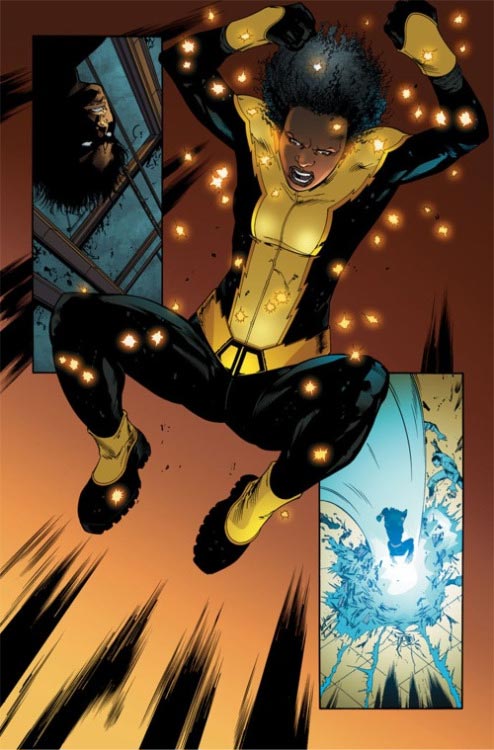 Anissa comes to blows with her father, who does not want her to be a superhero, and is present during the events of Infinite Crisis. After sustaining serious injuries on two occasions, Anissa takes a slight break until Amanda Waller requests she look for Geo Force, a former member of the Outsiders.

Anissa’s importance as (most likely) the first Black lesbian in DC comics is monumental. At Marvel, Catastrophe Jane was introduced in the same year, meaning that in the Big Two we got our first Black lesbians around the same time. While 2003 is more than a bit late to me to introduce a Black lesbian as a character, I’m glad that she existed at least at one point. And, beyond her introduction and presence, Anissa adds to important representation of Black lesbians in comics. She’s dynamic and has a distinct presence among her teammates and others she meets.

While you could argue that her characterization fits within Angry Black Woman stereotypes, her feelings come from a very real place. Between her father and sister, Anissa is rightfully angry, as she feels the weight of expectation but also the pressure of her sister’s heroism, which is explored in varying detail throughout the publication of Outsiders.

Yet, this is not related to her relationship with Grace, and she is explored in a manner that is multi-faceted. Anissa is consistent throughout her publication history, unwavering in seeking the best for herself, while also approaching others in very human ways. I appreciate that her narrative does not boil down to her gender, sexual orientation, or unhelpful stereotypes, but that her identities are visible throughout her stories. 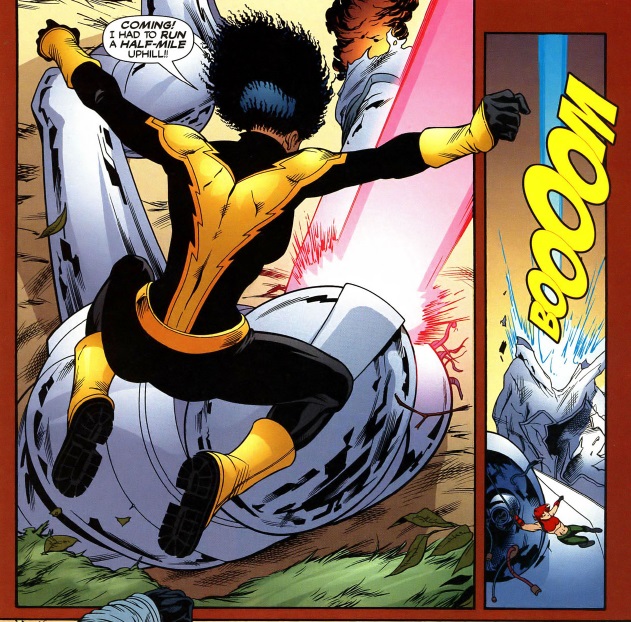 I’ve talked about the importance of pushing queer narratives beyond Whiteness and Anissa is just one more manifestation of this idea. She is a major character in the volume of Outsiders in which she first appears, and her personality is very apparent. While she can be brash, she is also compassionate towards others.

This quality is apparent even within the first few panels of her debut. She quickly comes to the defense of a man being beat on the street, and shows concern for him after the fight is over. Anissa also is willing to stand up for herself, challenging her father as attempted to take her out of the costumed life, as well as her sister whom she harbors some bitterness toward. Her ability to assert herself is an important part of who she is and provides a potential avenue for exploring confidence with clients, particularly young Black women. 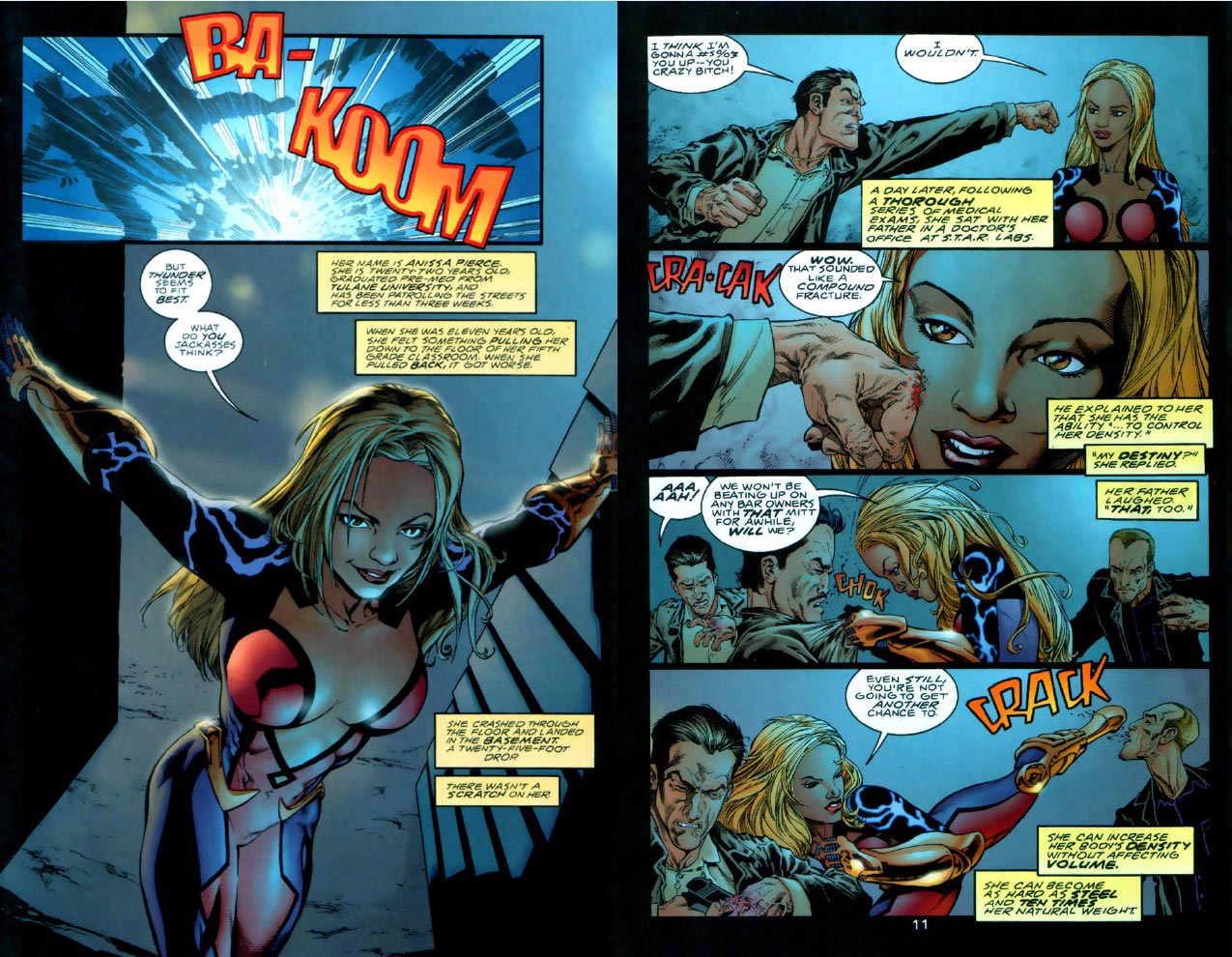 Her scenes with her family and her team highlight why Anissa could be valuable in the context of therapy. She essentially models assertiveness skills while providing a chance to address how to tweak these messages with others. Imagine the utility of Anissa’s interactions in discussing Black womanhood, Black queer womanhood, and navigating family, especially as they attempt to assert themselves in her life. Such interactions could be helpful in mirroring Black lesbian’s lives and helping them set boundaries that work for them.

Anissa’s narrative is refreshing because she is someone who takes it upon herself to seize her life in her hands. She had always felt a calling for heroism, and as soon as she fulfilled the deal set forth by her parents, that she would only wear a costume after she graduated from college, she took to the streets. Anissa is not one to back down, which is only supported by her abilities of manipulating her density. Yet, her agency has another important component. 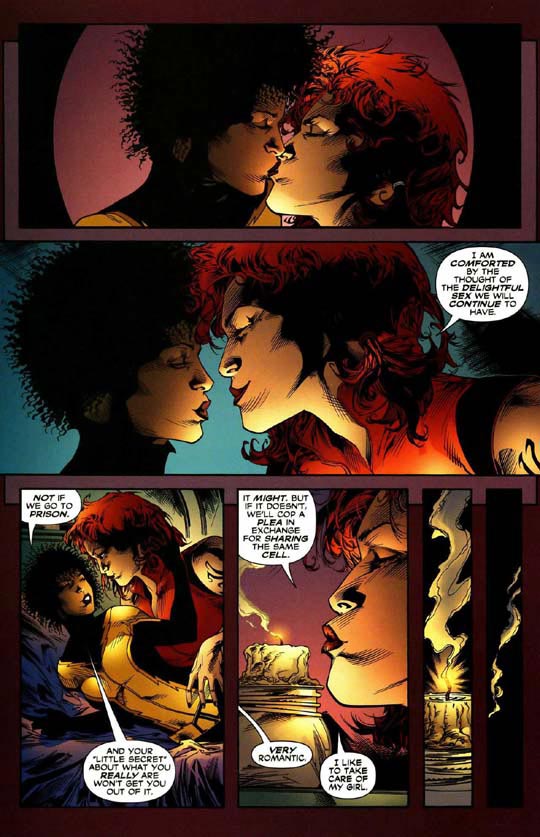 Her sexual orientation is not what inspires her to advocate for herself. For once, we have a character whose romantic life is prominent, but not the sole focus or framing of her identity. There are definitely some moments that address her orientation, but they do not take the spotlight. Anissa is someone who is very much human and real. It’s awesome to see that her sense of independence is part of her personality and not the function of oppression or marginalization. For her, autonomy is related to but still independent of her lesbian identity. I mentioned in my article on Masquerade that all queer people, especially trans people, deserve these types of narratives, so it’s awesome to see that such a story exists somewhere.

I’m not sure I could say enough that we need more queer Black characters in comics. The fact that there are so few means we need characters like Anissa. While she hasn’t been seen in the New 52, her time with the Outsiders was vital in shaping both her and her family’s stories. I would argue that Anissa is the type of nuanced and realistic portrayal we need of Black queer people. 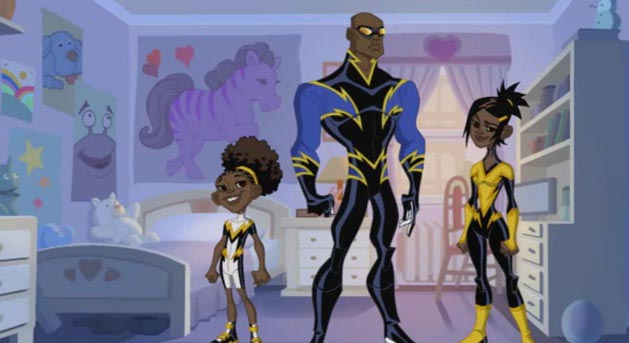 Anissa also speaks to what we lost in the wake of New 52. While DCYou has brought more diverse characters and titles, we no longer see many legacy characters in publication. What this means is that we lost many of them, like Anissa, who held some kind of diverse identity or representation. Her debut volume of the Outsiders seemed to actually try to make the team diverse, and there was a sense of heterogeneity throughout it and its subsequent volume’s runs. Luckily, we can still go back and revisit issues of the Outsiders that involve Anissa, reminding ourselves that sometimes people truly can get diverse narratives right.

What are your thoughts and feelings on the ground-shaking Thunder? Are there other Black lesbians in comics I missed? Let’s talk on Twitter at @80Grey and remember that there’s plenty of Representation and Health 101 articles for you to read.