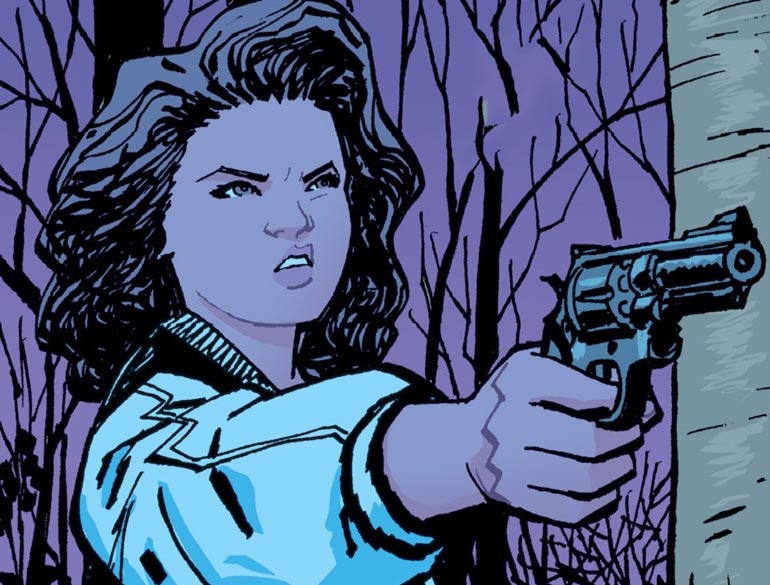 Welcome to the next Representation and Health Black History Spectacular! As part of this project, I wanted to pick someone who was relatively unknown, but who could provide a thought provoking analysis. With her latest appearance, I knew this character was perfect.

In the pages of Paper Girls, she is currently running through an apocalyptic Ohio town with three other girls. She’s shown that she wants more for her life, but also that she’s more than willing to get a little target practice in. I present to you Tiffany from Paper Girls! 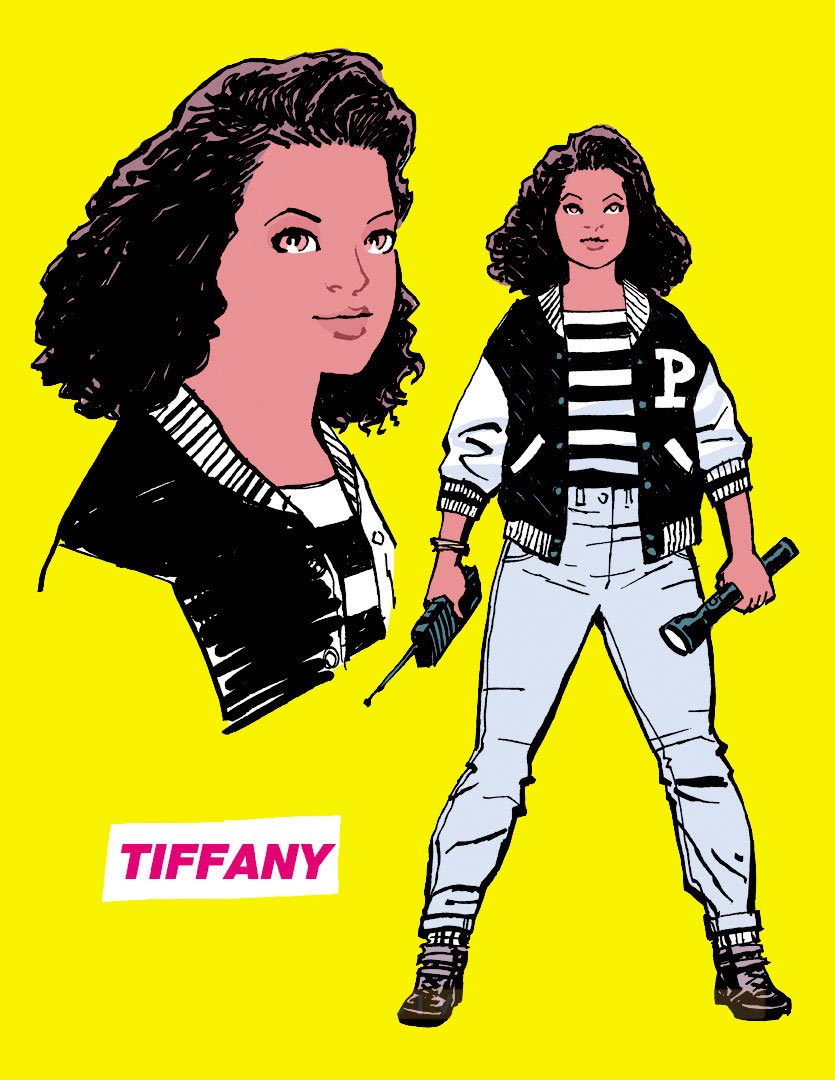 I realized that focusing on a new character in an ongoing series with a large overarching story would put me at a slight disadvantage regarding content, but I was dedicated to cover Tiffany in one of these columns. By Paper Girls #5, each of the girls’ distinct personalities were slowly emerging. Tiffany in particular is branching out and more of her inner qualities are coming to the forefront. It will take time for Tiffany to be fully fleshed out, but I appreciate that she is there, but also that she is not unidimensional.

Before whatever the hell is happening in Paper Girls, Tiffany just delivered newspapers to her town. She played pong for hours on end. After finding herself in the tendrils of a luminescent green monster, her short life flashes before her eyes, what I believe to be a catalyst for her development in subsequent issues. Such a moment, at least thus far, seems to be pivotal for Tiffany, and it lead her to defend her friends against the antagonists of their story, brandishing a pistol to protect them. We have incredibly realistic changes occurring in each of the characters, and Tiffany in particular decided that she wanted her life to amount to more than hours of ping pong with a pixelated ball. 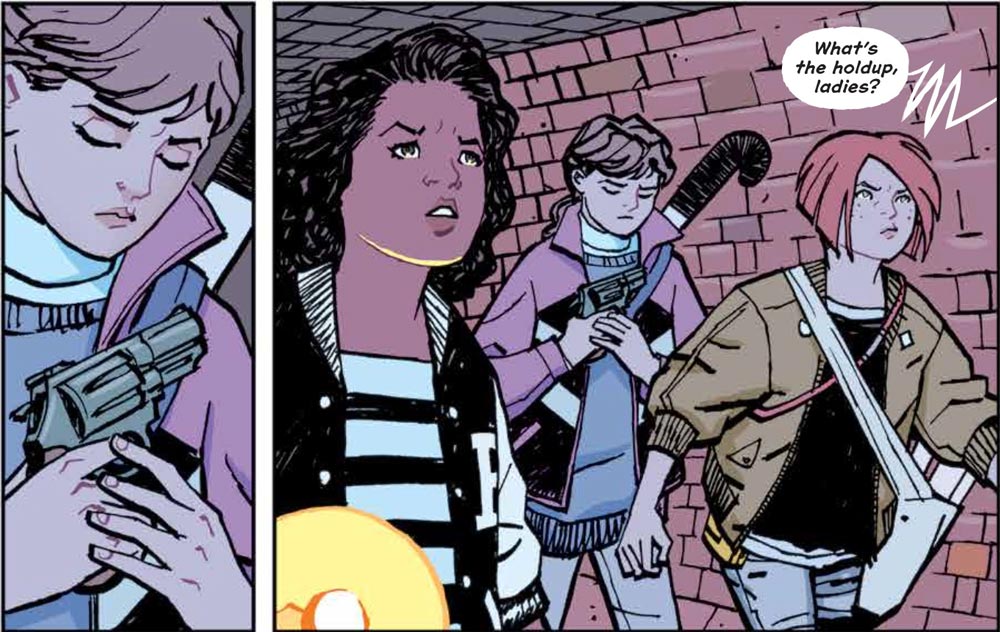 Essentially, Tiffany is a blank slate. As her series progresses, there’s a lot that can be done with her. Considering the history of fantasy and science fiction, it’s great that she is there as a representation of diversity. Having a young Black girl in a setting with Fire Emblem-esque Laser Staff Knights and time traveling gay teenagers is monumental, as people like Tiffany are often left out of these kinds of stories. Many, many people have remarked that, for genres that defy limitations of our material world, fantasy and science fiction are largely devoid of people of color. And here green doesn’t count.

Exploring science fiction with Black leads subverts an entire genre that was predicated on Whiteness being the avatar of conquering new frontiers. Such age-old narratives purport typically cishet White men as the heroes, the brave soldiers who manage to tame or become superior to alien races. Tiffany amongst a crew of Black girls creates a different story which allows people to explore a world through her, rather than the common White lead. 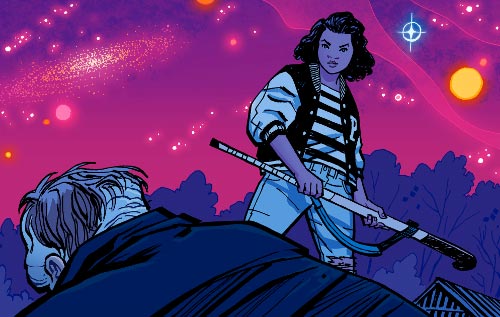 There may not be a larger cultural narrative regarding Tiffany, though her presence is important in the setting of the story, but that’s part of what I think makes her a special character. We can explore our choices through her because she looks like us. She gets to develop and change, just as we do, and we see how she responds to dire situations. She exemplifies the importance of diverse protagonists in fantasy and science fiction and gives us a chance to think about our own lives and what they mean in a sometimes chaotic world. Tiffany is becoming a warrior, a protector, where her qualities existed in the background before her contact with the green machine.

I imagine and hope that there is more in store for Tiffany as Paper Girls continues its run. Because she is still being developed, there are a lot of really awesome opportunities to explore with her as a character. Tiffany represents why we need human, diverse, and dynamic narratives to define representation. The sky is truly the limit and there are a lot of things she can do and feel as one of the main characters of the story. While addressing typically Black narratives is often important for Black characters, so is the recognition that sometimes we need a narrative that is unencumbered by the limitations of our world. Sometimes we need a character with whom we can grow and further identify. 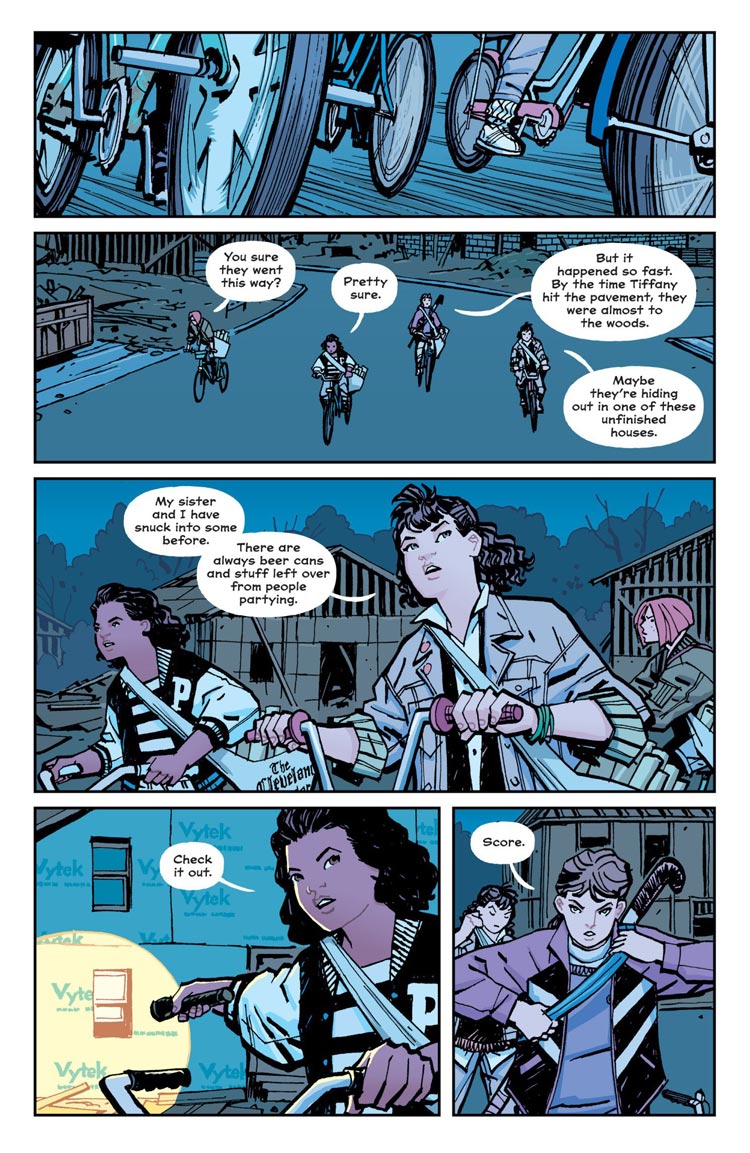 Tiffany also helps us reframe ideas about meaning and hobbies. While I wouldn’t be the first to decry someone playing video games in every waking moment, I also recognize that Tiffany disliked what her life had amount to thus far, even if she’s a teenager, and decided to do something about it. Not only was she a nerd, but she also realized what that meant for her, and it didn’t mean seasons spent in front of her tv watching a dot move across the screen. Both of these ideas are important as they bring out more of what makes Tiffany her, but also that she had the gumption to make a choice for herself about what she was going to do with her life.

Having a new character with no pre-established history or continuity provides readers with a unique chance to discover themselves and develop as the character does. They can assign qualities they admire, though also have an avatar to explore darker parts of themselves. These ‘blank slate’ characters are important when they match us because the sky is truly the limit and there are less narrative restrictions.

For this reason, I thought Tiffany was a subtly monumental character, as young Black girls reading this series could have a chance to literally see themselves in her. I wonder if Paper Girls could be the comic that gets Black girls into science fiction or helps them explore it, all because of Tiffany. While this may be idealistic, never forget the power of seeing someone like yourself in media, or that there is something significant about the presence of Black people in science fiction. 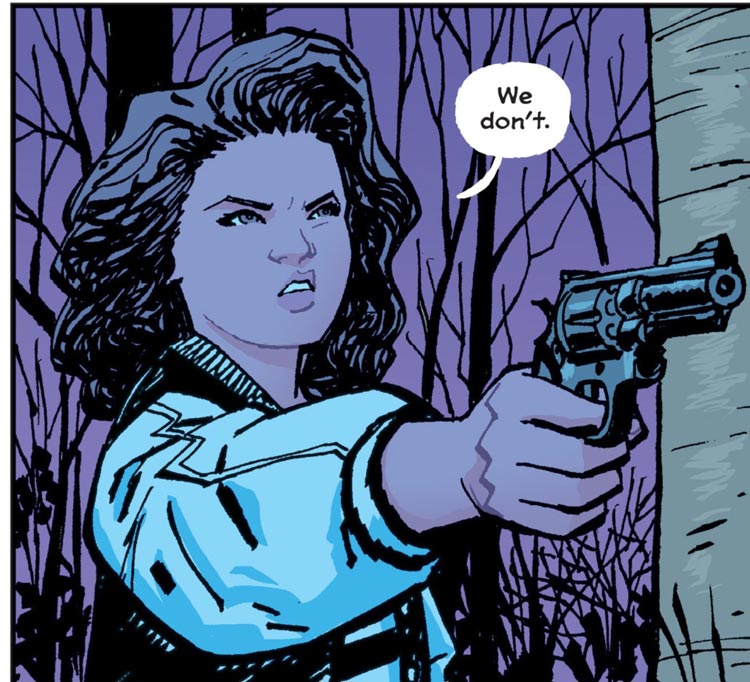 What are your thoughts on Tiffany? How do you feel about the presence of Black people in genres that often render them invisible? Let me know on Twitter at @80Grey and get caught up on the Representation and Health Black History Spectacular!